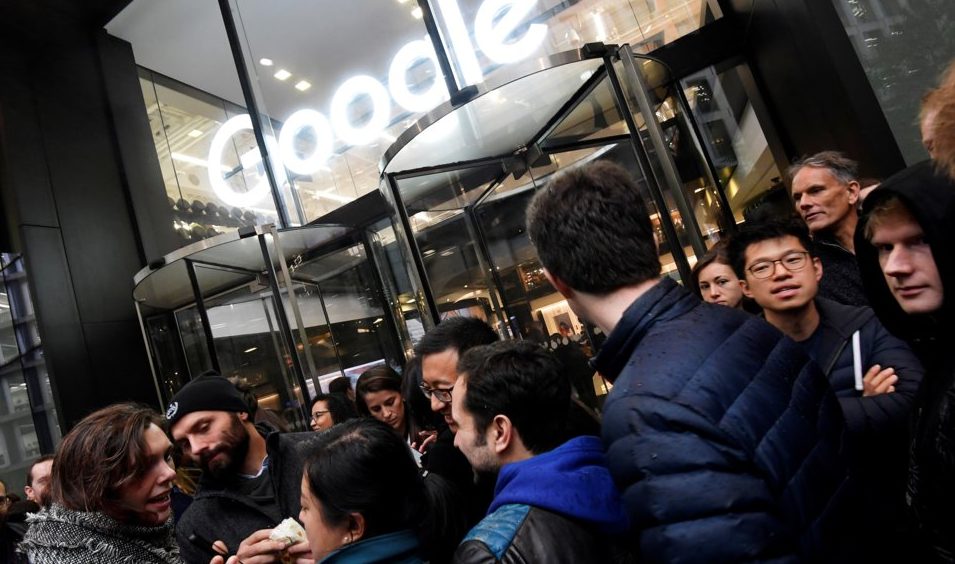 Above: Reuters photo of Google workers walking out in London. Business Insider reports “A Googler from London’s Camden office … said stories shared during the walkout were ‘heartbreaking.'”

Google employees around the world are staging a mass walkout Thursday in protest of sexual misconduct, following a major New York Times report last week that named executives who had been accused of sexual misconduct. The walkout, “Walkout For Real Change,” involves thousands of workers taking part in the protest which began at 11 am. See the hashtag #GoogleWalkout. Below are some tweets describing the walk out.

Google executives have taken the approach of not having a conflict with the protests. Google CEO Sundar Pichai said he supported them and was listening to google employees, saying “We are aware of the activities planned for Thursday and that employees will have the support they need if they wish to participate.” Those are nice words but will they meet the specific demands of Google employees? The demands are described below. Hopefully workers will remain vigilant in making sure these demands are met.

All of the headlines that start with “Google CEO supports…” are focusing on the wrong thing.

What matters today is workers’ voices and demands.

It doesn’t matter whether management claims to support; the real test will be whether the demands are met. #GoogleWalkout

Seven of the core organizers of the walkout said that over 60 percent of all Google offices will participate in the event. Google employees Claire Stapleton, Tanuja Gupta, Meredith Whittaker, Celie O’Neil-Hart, Stephanie Parker, Erica Anderson, and Amr Gaber cowrote a piece in The Cut detailing their reasons for organising the walkout that said:

All employees and contract workers across the company deserve to be safe. Sadly, the executive team has demonstrated through their lack of meaningful action that our safety is not a priority. We’ve waited for leadership to fix these problems, but have come to this conclusion: no one is going to do it for us. So we are here, standing together, protecting and supporting each other. We demand an end to the sexual harassment, discrimination, and the systemic racism that fuel this destructive culture.

They recognize to google walkout is part of a much bigger movement that has been building for a long time and say they are “inspired by everyone from the women in fast food who led an action against sexual harassment to the thousands of women in the #metoo movement who have been the beginning of the end for this type of abuse.”

The organizers listed the following demands:

An end to Forced Arbitration in cases of harassment and discrimination for all current and future employees, along with a right for every Google worker to bring a co-worker, representative, or supporter of their choosing when meeting with HR, especially when filing a harassment claim.

A commitment to end pay and opportunity inequity, for example making sure there are women of color at all levels of the organization, and accountability for not meeting this commitment. This must be accompanied by transparent data on the gender, race and ethnicity compensation gap, across both level and years of industry experience, accessible to all Google and Alphabet employees and contractors. Such data must include, but not be limited limited to: information on relative promotion rates, under-leveling at hire, the handling of leaves, and inequity in project and job ladder change opportunities. The methods by which such data was collected and the techniques by which it was analyzed and aggregated must also be transparent.

A publicly disclosed sexual harassment transparency report, including: the number of harassment claims at Google over time and by product area; the types of claims submitted; how many victims and accused have left Google; any exit packages and their worth.

A clear, uniform, globally inclusive process for reporting sexual misconduct safely and anonymously. The process today is not working, in no small part because HRs’ performance is assessed by senior management and directors, forcing them to put management’s interests ahead of employees reporting harassment and discrimination. The improved process should also be accessible to all: full-time employees, temporary employees, vendors, and contractors alike. Accountability, safety and an ability to report unsafe working conditions should not be dictated by employment status.

Promote the Chief Diversity Officer to answer directly to the CEO and make recommendations directly to the Board of Directors. In addition, appoint an Employee Representative to the Board. Both the CDO and the Employee Representative should help allocate permanent resources for demands 1-4 and other equity efforts, ensure accountability to these demands, and propose changes when equity goals are not met.

These are changes that should be considered in all workplaces as they will increase the rights of all workers, not just Google workers. Further, the walkout is a tactic that more workers need to use in this era of shrinking unionization and unions led by leadership that too often undermines the anger of workers and their willingness to take action.

Below are some tweets showing today’s walkout.

RT businessinsider: The #GoogleWalkout has begun at the NYC headquarters — follow along for the latest photos from the protest here https://t.co/nBR7uxU6au pic.twitter.com/o60erywXkS

Google workers here in Dublin walk out in protest against sexism, racism and unchecked executive power in the company #GoogleWalkout pic.twitter.com/wONJgHFSQA

GOOGLE Workers Walk Out In Protest Against The Treatment Of Women https://t.co/uZp1apO9ib pic.twitter.com/z90d65esAy

Google workers walk out to protest office harassment, inequality: Over 1,000 Google employees and contractors in Asia and Europe staged brief midday walkouts on Thursday, with more expected to follow at offices worldwide, amid complaints of sexism,… https://t.co/yASN765Isg pic.twitter.com/9KKjc7ou9O

Thursday briefing: Google workers walk out worldwide over sexual misconduct Hundreds of Google employees have begun a walkout against the company’s handling of sexual harassment, Earth’s oceans have absorbed 60 per cent more heat than pre… https://t.co/Oej20RYE1e via @viropera pic.twitter.com/VNbou9DY3J

Hundreds of Google engineers and other workers around the world walked off the job Thursday to protest the internet company’s lenient treatment of executives accused of sexual misconduct.https://t.co/IF9KdbaNKC

We, Google employees and contractors, will walkout on November 1 at 11:10am to demand these five real changes. #googlewalkout pic.twitter.com/amgTxK3IYw