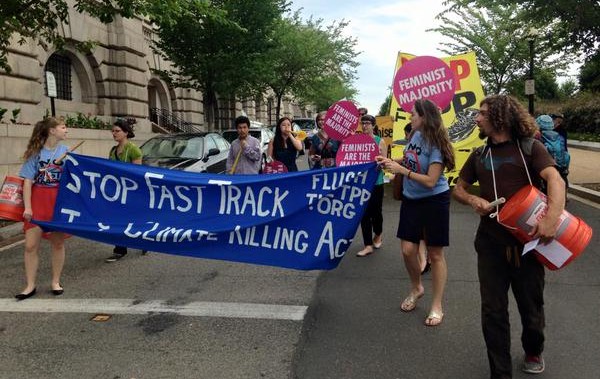 Above: March through the House Office Buildings on June 15, 2015. Photo by Jimmy Betts of Beyond Extreme Energy.

A Rigged Corporate Trade Deal; A Rigged Fast Track Review of the Deal in Congress; A Rigged Vote on Fast Track. Say No to the Delay. Enough Rigging of Democracy.

Washington, DC – After losing a landslide vote on Friday on a key aspect of Obama’s trade agenda that would prevent Fast Track, the GOP leadership is going to urge Congress to give themselves until July 30th for a re-vote. Why? Because they do not have the votes and want a month and a half to try to get them. In other words, they want to rig the legislative process to suit their needs.

Our view is — vote now. If you do not have the votes, it is over. Do not rig the legislative process. Normally a re-vote is required within 48 hours, two legislative days, a delay of a month and a half is unheard of and inappropriate.

Think about this: They write a treaty in secret with corporate interests ‘assisting’ the Obama administration, rigging the global economy for big business at the expense of people and planet; then they want to have a fast track process through Congress to rig the review of the rigged agreement; now because they lost the vote of fast track they want to rig the re-vote of the rigged fast track review of the rigged corporate trade agreement. Rigging on top of rigging on top of rigging — and they claim the US is a democracy?

Today we were back on Capitol Hill with the 24 hour a day Rigged Trade Rebellion. We started the day with a march around the House Buildings and then re-set up our encampment between the House Office Buildings and the Capitol Building. We will be there through the night and tomorrow to oppose this rigging of the legislative process by those who lose a democratic vote.

We know what they hope to do: hold the vote just before their long summer recess, get out of town quickly and hope the long break will result in people forgetting what they did. Warning to Congress: People are on to your games. We will not forget. We will not let you get away with this theft of democracy. You will be held accountable.

And, we will be there no matter when the vote is held.  The populist uprising across the country and across the political spectrum will continue and Members of Congress who vote for rigging our democracy — whether supporting these rigged corporate agreements, or the rigged fast track process or the rigged vote on the fast track process will be remembered by the voters.