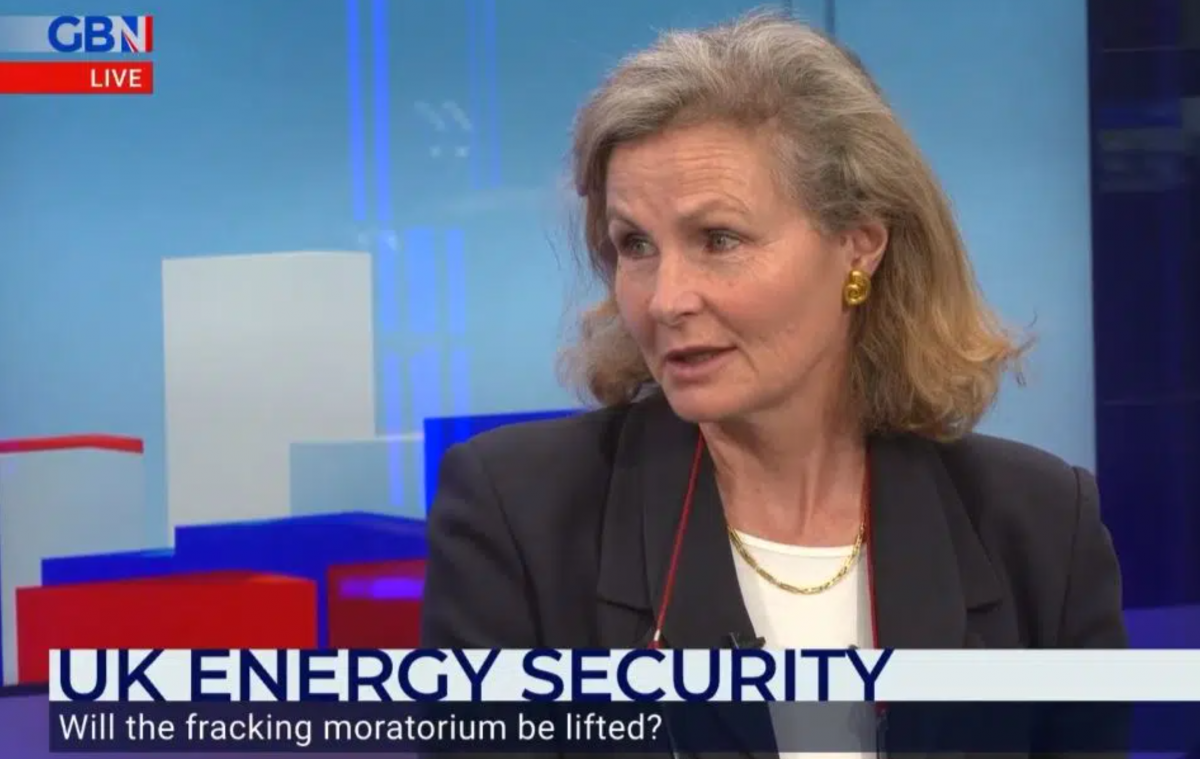 The unsubstantiated claim has resurfaced in recent months as pressure has grown for the UK to embrace the controversial gas extraction technique.

A trade advisor to the UK government has repeated a baseless claim that protests against fracking were funded by the Kremlin.

Economist Catherine McBride, a member of the government’s Trade and Agriculture Commission advising on trade deals, said on GB News this week that Russia has given “billions of pounds” to green groups to “go and protest against fracking”.

As DeSmog has reported previously, this claim has been promoted by opponents of climate action following Russia’s invasion of Ukraine despite there being no evidence to support it.

Her remarks come after 24 MPs signed a letter last week organised by Net Zero Watch, the campaign arm of the climate science-denying Global Warming Policy Foundation (GWPF), urging the government to scrap its moratorium on fracking for shale gas.

McBride is a fellow at the Centre for Brexit Policy (CBP), a pro-Brexit think tank whose fellows include several figures with a history of involvement in the GWPF. Other fellows include GWPF Energy Editor John Constable, GWPF advisor Matt Ridley, and former GWPF trustee Ruth Lea.

CBP fellow and former Tory leader Iain Duncan Smith signed the GWPF letter urging the return of fracking, as did former Brexit Minister Steve Baker, who is a trustee at the GWPF. McBride was previously a senior economist at the Institute of Economic Affairs, a pro-Brexit think tank that has opposed green policies and received funding from oil giant BP.

DeSmog has mapped the extensive ties between groups pushing against government climate action and the campaign for a “hard” Brexit.

The CBP is also chaired by disgraced former MP Owen Paterson, who resigned from parliament last year over a lobbying scandal.

In May, DeSmog revealed that the new chairman of GB News’s parent company has a history of sharing articles on Twitter that dismiss the threat of climate change.

McBride told DeSmog she appeared on GB News as a representative of the Centre for Brexit Policy, not the Trade and Agriculture Commission, and that “all of my views are my own and do not reflect those of the CBP nor of the TAC”.

She defended her comments by pointing to an article by Matt Ridley, as well as research conducted into Russian efforts to oppose fracking in Europe. No evidence of financial ties between the Kremlin and environmental groups was provided.

Speaking on GB News on Tuesday, McBride said: “You talk about lobbying from the oil and gas industry, but one of the big lobbyists out there is Russia. Russia used to be the world’s biggest gas producer until America started fracking. And so a lot of the anti-fracking information is disinformation and it’s coming from Russia.

“Both Rasmunsen [sic] when he was head of NATO and the Centre for European Studies have both discovered that billions of dollars or billions of pounds have been pushed into the NGOs to go and protest against fracking.”

The claim that Russia funded anti-fracking NGOs and protests has been attributed to one unsubstantiated remark from 2014 by the then NATO Secretary General Anders Fogh Rasmussen, who said Russia had “actively engaged” with environmental groups opposing shale gas “to maintain European dependence on imported Russian gas”.

Rasmussen, a supporter of fracking, declined to give evidence at the time, saying: “That is my interpretation.”

The other source McBride gives appears to be a reference to a 2020 report by the Wilfried Martens Centre for European Studies, the “official think tank” of the centre-right European People’s Party.

This report was also cited in a column in The Sun newspaper in March by GWPF advisor and CBP Fellow Matt Ridley, who said the report concluded that “the Russian government has therefore invested €82 million in NGOs whose job is to persuade EU governments to stop shale gas exploration”.

However, the only source for this line in the report appears to be an “interview with anonymous contributor”.

Net Zero Watch’s pro-fracking letter signed by MPs was promoted this week by CAR26, another climate science denial group whose director Lois Perry is a regular on GB News. Last month, DeSmog reported on her close ties to John Mappin, a right-wing businessman who has praised Russian president Vladimir Putin’s invasion of Ukraine as a “gift for the freedom of the world”.

Perry’s petition to overturn the fracking ban was rejected by the UK government last month, although a report due to be published by the British Geological Survey in the coming days could open the door to the controversial gas extraction method.

The CBP did not respond when contacted for comment. The Trade and Agriculture Commission referred DeSmog to the Department for International Trade, whose spokesperson said: “The Trade and Agriculture Commission was established to scrutinise the UK’s new free trade agreements once they are signed. It is an independent body, therefore DIT is unable to comment on remarks made by its members.”