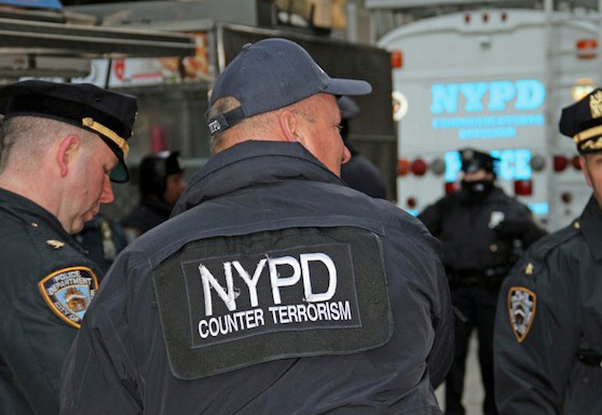 We learned in the wake of the Occupy Wall Street movement that the government’s use of its anti-terror apparatus at a local and federal level was both routine and pervasive. Thus far, the means with which similar practices have been used on #BlackLivesMatter have been subtly emerging — thanks in large part to some truly intrepid journalism — from across the country. Here is a recap of the five of the worst examples:

Though it was mostly taken for granted by those paying attention within the activists community, official recognition that the NYPD and its FBI Joint Terror Task Force were using their counter terror units on #BlackLivesMatter didn’t really come until a casual admission by the NYPD in the New York Post the day before the announcement of the Eric Garner verdict in December of last year:

“They wore me out, ” said one counterterror expert who monitored the protests. “Their ability to strategize on the fly is something we haven’t dealt with before to this degree.”

A few weeks later, the New York Post would again be the forum with which the NYPD would casually assert counter terror units were used on #BlackLivesMatter, this time in connection to an alleged assault on an NYPD officer: “Linsker was nabbed by members of the Joint Terrorism Task Force around 3:45 a.m., sources said.”

How the NYPD’s Counterterrorism Apparatus Is Being Turned on Protesters

The police wearing the counterterrorism jackets at protests are perhaps the most palpable sign of the agency’s transformation since 2001. Before 9/11 the NYPD had no counterterrorism bureau and the Intelligence Division focused its resources on gang activity. After the September 11 attacks, however, billions of dollars were poured into the department to counter the threat of terrorism, as a 2011 60 Minutes report showed. Critics of the NYPD’s post-9/11 turn have been arguing that practices devoted to fighting terrorism have violated the Constitution.

Now, they say, the NYPD is unleashing its counterterrorism tools on activists against police brutality, conflating legitimate protest with the threat of terrorism.

A cache of emails revealed by Darwin BondGraham of the East Bay Expresstwo weeks ago revealed the California Highway Patrol were using its anti-terrorism apparatus, including fusion centers like Northern California Regional Intelligence Center to monitor #BlackLivesMatter activists on social media. As BondGraham would lay out:

An email sent on December 12 illustrates how counter-terrorism officials working out of fusion centers helped CHP monitor protesters. At 12:12 p.m. that day, Elijah Owen, a senior intelligence advisor with the California State Threat Assessment Center (Cal STAC) sent CHP officer Michael Berndl a copy of a protest fliercalling for a speak-out and march against the CHP the next day. “Just so it’s on your folks’ radar,” wrote Owen. Cal STAC officers appear in other CHP emails as sources of information, or recipients of intel gathered by the Oakland Police Department, Alameda County Sheriff’s Office, and other agencies.

Earlier this year, the California Highway Patrol would also casually drop in the LA Times how they used fake twitter profiles to monitor protesters:

Despite Wednesday’s incident, Browne said he will continue to deploy plainclothes officers to gather intelligence from protesters. Officers have also been creating Twitter accounts, on which they don’t identify themselves as police, in order to monitor planned demonstrations.

Law enforcement officials at the Department of Homeland Security-funded “Commonwealth Fusion Center” spied on the Twitter and Facebook accounts of Black Lives Matter protesters in Boston earlier this week, the Boston Herald reports.

The reference to the so-called ‘fusion’ spy center comes at the very end of a news story quoting Boston protesters injured by police in Tuesday night’s demonstrations, which was possibly the largest Ferguson related protest in the country the day after the non-indictment of Darren Wilson was announced.

Though it was buried at the end of the Boston Herald story, the use of fusion centers – deliberately set up for the purposes of stopping terrorism – are, once again, being used to monitor  peaceful domestic dissent.

Just as with the California Highway Patrol, internal emails between local police departments and federal authorities revealed the extent to which the counter-terror apparatus was casually – and entirely turn-key – used on #BlackLivesMatter. The Intercept’s Lee Fang revealed in March:

Why Was an FBI Joint Terrorism Task Force Tracking a BlackLives Matter protest?

Members of an FBI Joint Terrorism Task Force tracked the time and location of a Black Lives Matter protest last December at the Mall of America in Bloomington, Minnesota, email obtained by The Intercept shows

The email from David S. Langfellow, a St. Paul police officer and member of an FBI Joint Terrorism Task Force, informs a fellow task force member from the Bloomington police that “CHS just confirmed the MOA protest I was talking to you about today, for the 20th of DEC @ 1400 hours.” CHS is a law enforcement acronym for “confidential human source.”

In other words, these emails revealed that not only was the FBI using its Joint Terror Task Force – an entity that exploded post-9/11 in the name of fighting terrorism –  but also using paid informants who were undercover posing as protestors. Once again, tactics and legal allowances created in the name of  “stopping terrorism” are being used, without any oversight or public debate, on entirely peaceful domestic activism.

The most haunting revelation may just be the latest, from CNN:

As the Missouri National Guard prepared to deploy to help quell riots in Ferguson, Missouri, that raged sporadically last year, the guard used highly militarized words such as “enemy forces” and “adversaries” to refer to protesters, according to documents obtained by CNN.

CNN’s use of military speak aside (“quell riots”), the report clearly shows those in charge viewed both rioter and protester alike as enemy combatants and Ferguson as a war zone.

What makes this, and the other above examples, so pernicious isn’t just the use of anti-terror language, legal authority, and apparatuses on peaceful domestic activism, it’s the entirely casual nature with which it’s done. Beyond a few PR tweaks, there doesn’t seem to be, in any of these internal documents, an ounce of doubt or hesitation as to whether or not using systems set up ostensibly to combat al-Qaeda should be so quickly turned on domestic activism. If all you have is a hammer, as the cliche goes, everything looks like a nail. We’ve given our hyper-militarized police and the FBI the hammer of coordinated mass surveillance, infiltration, and monitoring in the name of fighting a phenomenon that kills fewer people a year than bee stings, It was only a matter of time, therefore, that mass protests would begin to look like a nail in the eyes of our paranoid, over-equipped security officials.