We are currently traveling in the United Kingdom, following our participation in the No US NATO Bases conference in Dublin, Ireland and delivery of a letter to the International Criminal Court in The Hague calling for a full investigation of Israel’s war crimes. We spent the past few days meeting with activists and visiting some friends and family.

A major concern in the UK is Brexit. Everyone is talking about it. There is great fear that if Brexit goes through, it will harm the UK. Repeatedly, people told us they feared violence by Brexiters if there was another vote and the Remainers won. News reports indicate there are plans for the UK military to be on the streets if chaos breaks out over Brexit. Today, the EU’s Council agreed with Prime Minister May’s proposed Brexit agreement, but now it appears that the agreement is unlikely to pass the UK Parliament.

We also heard quite a bit about the National Health System which has been under attack by privatizers for years. Due to cuts and changes, they are already starting to experience some of the problems that are rampant in the US such as denials of care. People are seeing some of the worst aspects of the US healthcare crisis exported to the UK and do not want to see further starvation and privatization of their system.

On a positive note, the public transportation system in the UK is excellent and used heavily and there are cooperatives of all sorts. The cooperative movement has a long and strong history in the UK, starting prior to 1800 and really taking off when the Rochdale Principles were created in 1844. 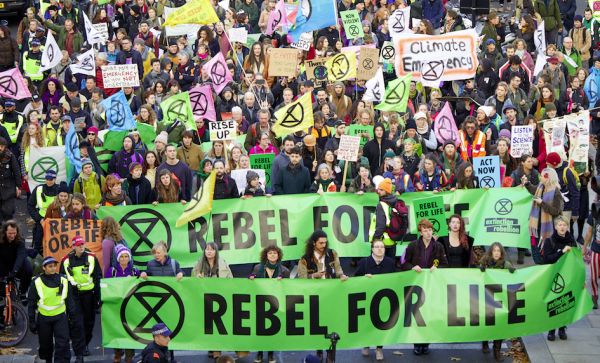 There is a lot of enthusiasm for the new climate change effort in the UK, the Extinction Rebellion. Launched on October 31, the Extinction Rebellion calls for mass nonviolent, disruptive actions targeting the government for its failure to take appropriate action to address the climate crisis. On November 17, there were actions across the UK. Thousands of protesters shut down five major bridges in London.

There were also solidarity actions in other countries. 50,000 people marched in Montreal, Quebec to tell their government it needs to take stronger action. March organizers said that the lack of discussion of climate change in the elections is one element that is galvanizing people to take action.

Organizers in the UK hope the campaign goes worldwide. We interviewed Marijn Van de Geer who works with the Extinction Rebellion in London on Clearing the FOG. Van de Geer explained that while there is resistance to many fossil fuel projects in the UK, the Extinction Rebellion provides a way for the many campaigns to unite against a common target, the government, and still engage in their individual activities. 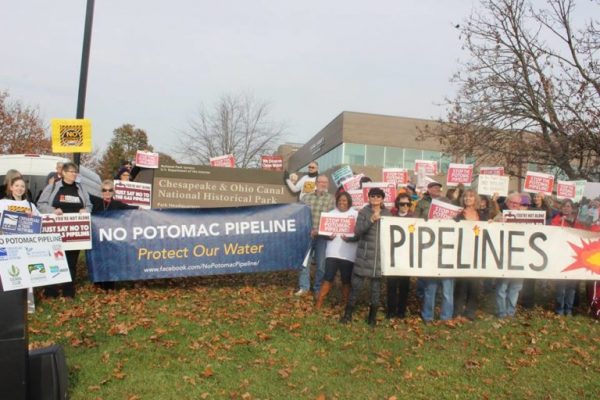 People opposed to the Potomac Pipeline and the Rockwool factory it would supply with gas gather to deliver petitions to the National Park Service./Photo courtesy of CCAN

Impossible to avoid the reality of climate change

Pipeline protests continue. Activists working to stop the Atlantic Coast Pipeline had another success this week. The US Army Corps of Engineers has suspended permits that would allow the pipeline to cross bodies of water. Activists in West Virginia and Maryland are pressuring the National Park Service to deny permits for TransCanada to build a pipeline under the Potomac River in a fragile area. And Enbridge Line 3 opponents have vowed to continue their resistance.

On Friday, Volume II of the Fourth National Climate Assessment was released by the Trump administration. Mandated by Congress and authored by officials from thirteen federal agencies, the report, though conservative, admits that climate change is happening rapidly, that human activity contributes to it, that the impacts are significant and that more needs to be done.

Of course, these are the same findings of the Third National Climate Assessment released in 2014, yet the United States government has not taken appropriate action to address the crisis and climate change was absent as a major topic in the most recent election. Perhaps it is time to organize an Extinction Rebellion in the United States.

The Democrats are already positioning themselves to give the appearance of doing something about the climate crisis. The newly-elected Alexandria Ocasio-Cortes has stated her intention to introduce a “Green New Deal,” an idea championed by the Green Party for over a decade. Will Morrow raises valid concerns that the Democratic Party Green New Deal will be more fluff than substance. 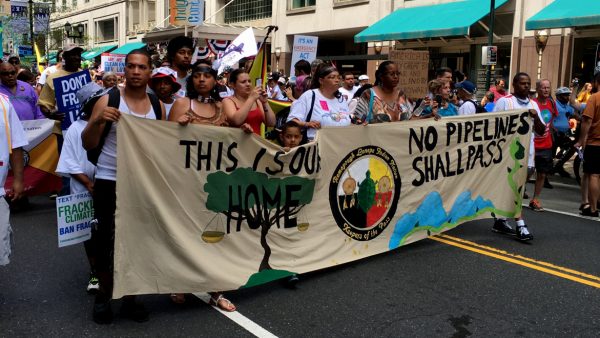 We don’t have time for the usual partial solutions offered by Democrats. The climate crisis is intimately related to racism, colonialism, capitalism, militarism and imperialism. It can’t be solved in isolation. It will take an organized movement of movements to mitigate and adapt to climate change in a way that causes the least harm.

In “Confronting Carbon Capitalists,” the Seattle IWW explain that privileged liberals are coming to understand what colonized people have known for a long time, that capitalism is at the root of climate change. They write, “labor and ecological exploitation has remained vast and systemic… and the story is always the same: colonize a population, use violence to break them from their land and means of subsistence, extract fossil capital, then move on and leave the decimated landscape to the locals.” They call for solidarity with the Indigenous and colonized people.

Manuel Garcia, Jr., writes that US imperialism will prevent the US from adequately tackling climate change. He explains, “American political power is based on fossil fuels, and the US military is the engine that consumes those fuels to produce that power.” In order to address climate change, there will have to be a massive shift in political ideology and power.

There are opportunities to move toward making the necessary changes. In California, the energy corporation PG&E has been found responsible for three major fires, including the most recent one in which 85 people died and hundreds are still missing. As a result, PG&E is on the verge of bankruptcy. This provides an opportunity for the state to make PG&E a public entity. Johanna Bozuwa describes what that would look like and how it would enable the state to act more quickly to move to renewable energy.

New economic models are also being developed. Through the Learning/Action Lab for Community Wealth Building, Native communities are creating new institutions that are centered in decolonization. Read more about a Lakota community’s efforts.

As with all of our efforts at transformational change, we need to connect our struggles, share a common set of principles and work together strategically to effect change. It is a process of both resistance to harmful policies and practices and creation of positive alternatives based on our values that will lead to success. There is something for everyone to do.

Popular Resistance is in the midst of end-of-year fundraising. Our goal this year is $30,000. Funds are used to pay the ten staff who keep the website and campaigns going, cover the costs of maintaining the website, buy supplies and cover other campaign costs. If you are able, please make a tax-deductible donation today. Click here to donate. If you donate $35 or more, we will send you an item from the Popular Resistance Store. Contact us at info@popularresistance.org to let us know which item you would like.