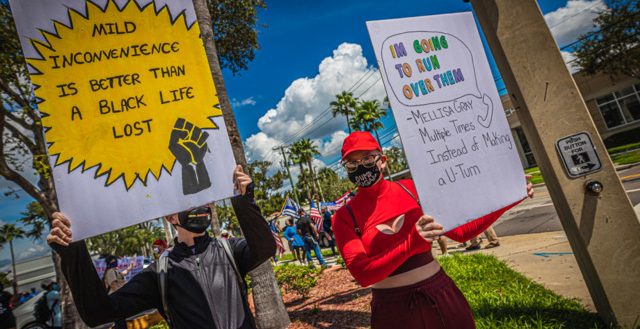 Tallahassee, Fla. – This morning, just days after the Republican-led Florida Senate voted to pass an unprecedented, costly and racially charged bill (House Bill 1) to censor protest, preempt local policing budgets and preserve symbols of white supremacy, Governor DeSantis is signing it into law. The bill passed despite widespread opposition by Floridians of all political ideologies and diverse sectors, after Governor DeSantis made it his number one legislative priority and lobbied behind doors to make sure it passed both Chambers as early as possible. The new law, which does nothing more than silence dissent and criminalize peaceful protestors, will disproportionately censor, incarcerate, and kill Black Floridians simply exercising their constitutional rights, setting a dangerous precedent of criminalization and repression. In the middle of an unprecedented global health crisis, Floridians need resources and relief, not dangerous and costly laws that go against America’s values of democracy and freedom of expression.

The following are statements from civil rights and social justice organizations in Florida.

“If only the Governor responded this quickly to the most pressing issues Floridians have been facing during the pandemic like preventing the spread of COVID, fixing our rigged unemployment system, or guaranteeing that the most vulnerable Floridians had access to vaccines -not just his wealthy donors-. Our public servants should be bending over backwards to meet the needs of their constituents and answering the calls for safety and justice for Black lives; instead, they are approving unpopular, discriminatory laws that will make life harder for the people in this state. They should be ashamed of themselves.

Black lives matter and so do our constitutional rights. We’ll see you in court.”

Francesca Menes, Co-Founder and Board Chair of The Black Collective

“This bill is a direct response to our effective organizing, locally and across the nation to reimagine public safety and value Black lives. House Bill 1 will disproportionately criminalize Blacks in Florida, undermine our free speech and punish local governments for responding to the calls to prioritize the needs of their communities. These enhanced felonies, new mandatory minimum and established crimes which are intentionally vague, increases the discretion of individual police officers to interpret any gatherings of three or more Black people in public.”