Lusby, Maryland – For the past year, residents of Cove Point and their allies have petitioned Governor Larry Hogan with a very reasonable request: order a safety study (officially known as a Quantitative Risk Assessment or QRA) for the gas refinery, power plant and export terminal that Dominion Energy, a Virginia-based corporation, is building in Cove Point.

Thousands of petitions have been delivered to the Governor. A letter signed by 84 organizations was delivered. Residents spoke personally with the Governor at parades and other events and met with his staff to present the concerns.

On June 20, due to the lack of response from the Governor’s office, a small delegation traveled to Annapolis yet again to request the safety study. This letter, as well as supporting documentation, was delivered and the delegation spoke to the head of constituent services. 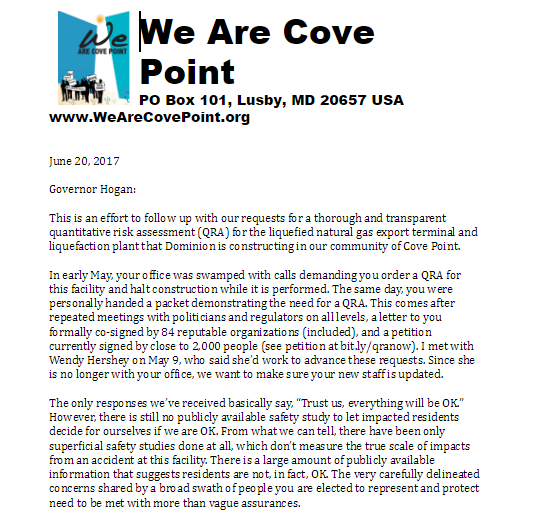 The staffer promised to look into the situation and get back to us. Leslie Garcia and Donny Williams of Cove Point explain:

The next day, the staffer called Donny Williams to inform him that the Governor supports Dominion’s project in Cove Point and would not request a safety study.

Think about that for a moment… the Governor could support the project and also support wanting to know what hazards the project poses to his constituents and how to best protect them. So, perhaps the Governor supports the project and knows that a safety study is likely to show that the facility should not be placed in a densely-populated residential neighborhood. If that is the case, then he is choosing Dominion’s profits over the health and safety of his constituents.

We will not give up! Here are actions that you can take to pressure the Governor to order the safety study:

1. Join us for an emergency rally this Monday, June 26 at noon at Lawyer’s Mall in Annapolis. Lawyer’s Mall is the area between the State House and the Governor’s Mansion. Spread the word using this Facebook event (post it on your Facebook Page and invite your friends).

2. Call the Governor’s office at 410 974 3901 and tell them that he must order a safety study (formally called a Quantitative Risk Assessment or QRA) for the facility at Cove Point.

To learn more, here is some of the information submitted to the Governor: 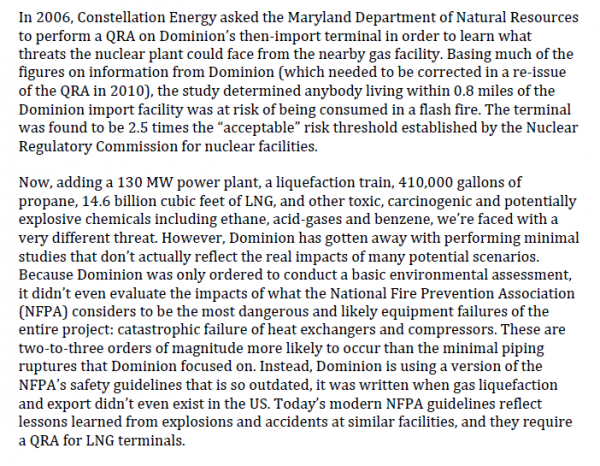 The Dominion facility is three miles from the Calvert Cliffs Nuclear Power Plant. The concussive force from an explosion at a gas facility in Washington State traveled five miles. 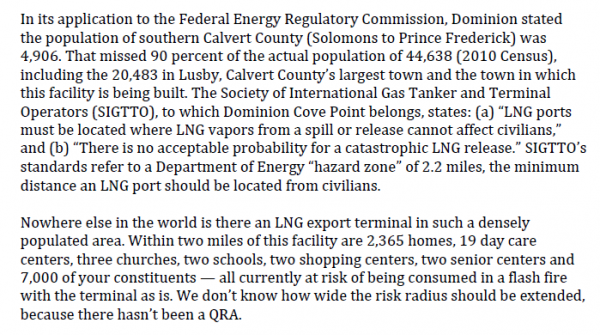 And here is a full presentation of facts given to the Governor: SoMDDelegationPresentation_LGM-Rev_FINAL with comments