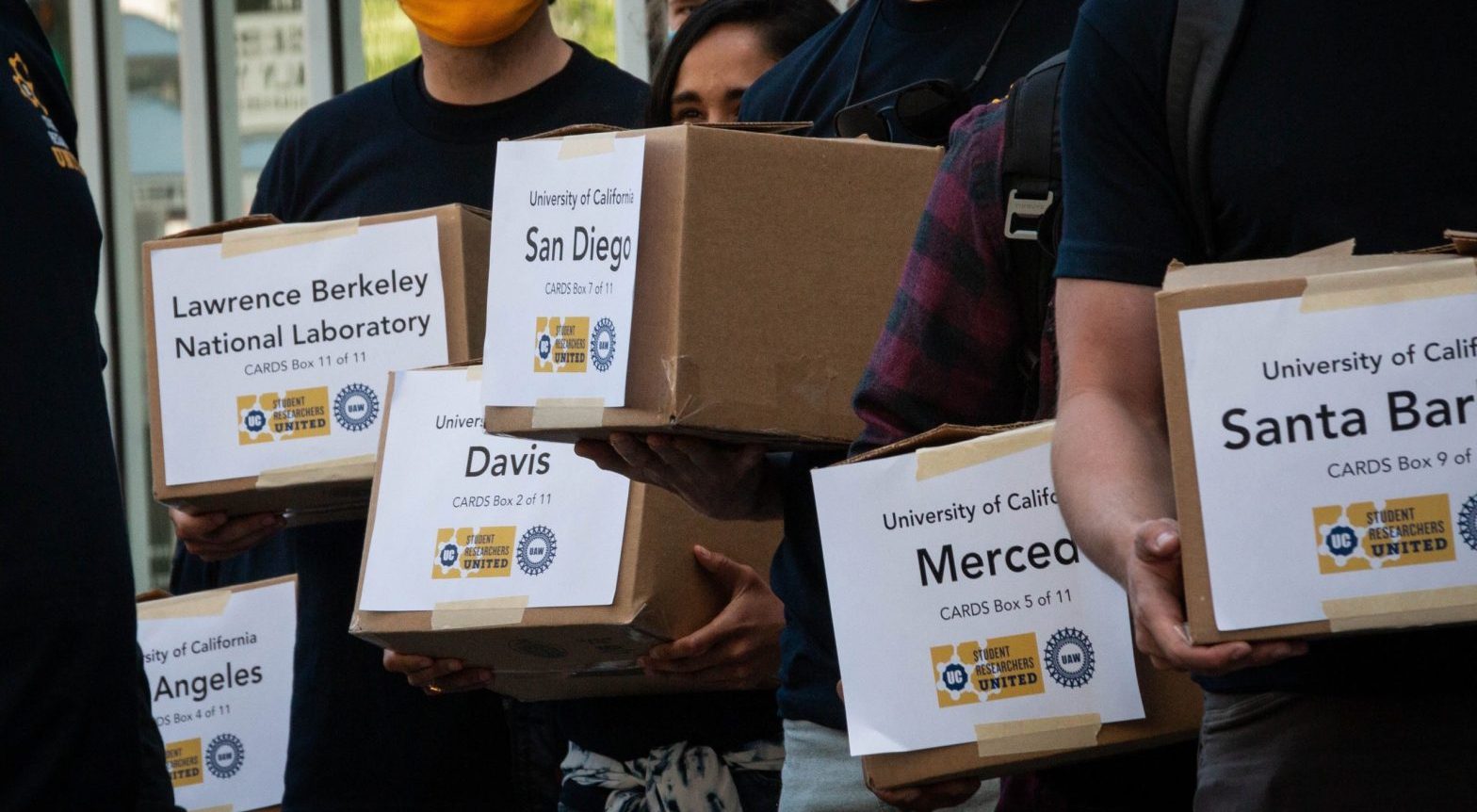 In one of the largest public employee organizing drives California has seen in over a decade, some 17,000 graduate student researchers at the University of California may soon become union members.

Student Researchers United, a committee of graduate student researchers, filed a petition for union certification with the California Public Employment Relations Board May 24. Organizers say they are seeking better wages and healthcare benefits, written protections against harassment and discrimination and a formal grievance procedure. They’re also calling for more legal and political support for international student workers, and an end to irregular or late pay.

“I’m really excited for us to be able to make our working conditions better, make our work balance better, and improve things like equity as graduate students and create a more democratic workplace,” said Katie Augspurger, a Student Researchers United organizer and biochemistry researcher at UC San Francisco’s Buchwalter Lab.

Currently, graduate student researchers work part-time under either a faculty member or principal investigator, studying everything from the genetics of aging to Mars’ atmosphere. They earn between $1,780 and $3,488 monthly, according to data from the UC Office of the President, along with a stipend to pay for UC-provided healthcare. The campaign submitted more than 10,000 signed authorization cards representing about 60% of graduate student researchers from all 10 campuses and Lawrence Berkeley National Laboratory.

Erika Cervantes, a UC spokesperson, said the university was agnostic about the unionization effort.

“UC values its graduate student researchers and their many contributions to the University,” she said. “UC neither discourages nor encourages unionization. UC supports employees’ right to choose for themselves and to make an informed decision.”

That’s a change from just a few years ago, when the system opposed an effort to define graduate student researchers as employees.

Graduate student researchers only received the right to unionize in 2017, when the California Legislature passed a law allowing them to be considered employees, as teaching assistants and tutors already were.

The UC wrote to lawmakers that the bill might result in “substantial financial costs to the University” and argued that, “Research is not ‘work’ in the traditional employment sense in that it does not represent an exchange of wages for services.”

Without a union contract, graduate student organizers say pay can vary widely within and among departments, and can be affected by whether someone is classified as a “graduate student researcher” or “fellow.”

Ariana Firebaugh Ornelas, a third-year graduate student in the Department of Evolution, Ecology, and Organismal Biology at UC Riverside, said this year she was moved from her graduate student researcher position to a fellowship, a change that came with a significant drop in pay.

“I was doing the same work,” Firebaugh Ornelas said. “My research never changed. Just my funding source changed and I wasn’t made aware.”

Firebaugh Ornelas said she took a second job, then a third, and ended up having to take out personal loans to make ends meet.

“There are no minimums that the UC sets,” she said. “So you’re not ensured that your basic needs are going to be met when you’re on any kind of fellowship.”

Firebaugh Ornelas asked for help from United Auto Workers Local 2865, which represents teaching assistants and tutors, and when they couldn’t assist her directly, they pointed her to the researchers’ organizing campaign.

The university didn’t respond to follow-up questions about Firebaugh Ornelas’ experience, pay for researchers who are classified as fellows, or the timeliness of researchers’ pay by press time.

Student Researchers United hopes to form a separate local union chapter within the United Auto Workers. For the union to be officially recognized and move into contract bargaining with UC, signed authorization cards representing more than half of graduate student researchers must first be certified by the California Public Employment Relations Board.

Once the cards are crosschecked with the UC and verified, if the group doesn’t have signed cards from more than half of the potential bargaining unit, but still received signatures from at least 30%, then the board will hold a secret ballot election. If the UC challenges who should be in the unit, the process will take longer, said the board’s general counsel, J. Felix De La Torre.

If the researchers are successful, it would be the largest new bargaining unit of student workers in the country since at least 2012. The organizing campaign “is consistent with the national trend of student workers seeking union representation,” said William A. Herbert, Director of the National Center for the Study of Collective Bargaining in Higher Education and the Professions at Hunter College.

The union effort comes at a time of labor strife within the UC: Lecturers represented by the University Council-American Federation of Teachers recently voted to authorize a strike, citing concerns about pay and job security. And last year, police in riot gear confronted teaching assistants who waged a months-long protest for a cost of living adjustment to keep up with the state’s rising rents.

Augspurger said she and other organizers spent the past year individually reaching out to colleagues about the union and asking them to sign cards. The pandemic meant that much of the work took place over Zoom rather than in person. But because the union prioritized one-on-one meetings, she said, they didn’t have to send out mass emails that could potentially make their way to UC administration and hamper unionization efforts.

De La Torre said he didn’t have an estimate of how long the verification process would take, in part because of the sheer number of cards submitted.

“These are the most cards filed in a representation petition in probably the last 15 to 20 years,” he said. “Or maybe longer.”