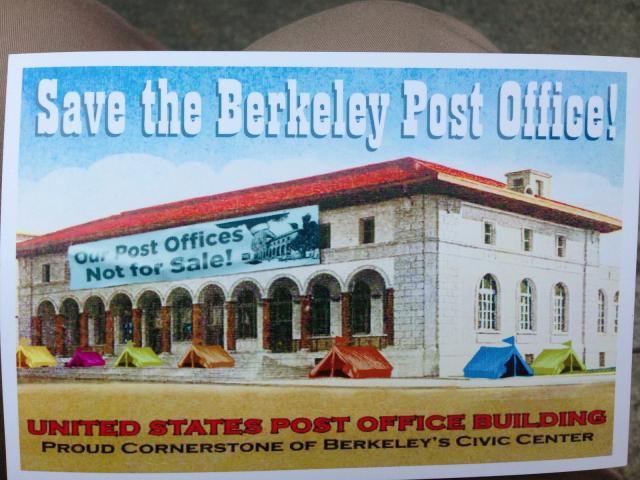 Video and Photos Below: Police Bust up 33-day-long Tent City on steps of Berkeley Post Office

In an impassioned speech before more than 1,000 union members, the newly-elected national president of the American Postal Workers Union, Mark Dimondstein, issued a call for a “grand alliance” to save the USPS as a public postal service and to protect postal jobs.

“When the Flint sit-down strikers occupied a General Motors plant in the 1930s, labor law reform was won. When women took to the streets to demand the right to vote, they won. When courageous civil rights workers fought segregation with sit-ins and boycotts, the 1964 Civil Rights Act followed,” Dimondstein said.

“History shows that movements move Congress. Movements create legislative victories, not the other way around,” he said.

“We must build a grand alliance between the people of this country and postal workers,” he proclaimed. “We must mobilize our allies and their organizations, including seniors, retirees, civil rights organizations, veterans groups, the labor movement, community and faith-based organizations, the Occupy movement, and business groups in defense of America’s right to vibrantpublic postal services,” he said.

The labor movement is in dire straits, Dimondstein acknowledged. “Anything that stands for the public good — public libraries, public education, public utilities, public transportation and public postal services — is under severe attack, as are public workers and our unions.”

But postal workers are not alone, he said. Public workers in Wisconsin stood up and fought back, he noted. “Wal-Mart workers are stirring. Fast food workers are demanding a living wage.”

“A revitalized labor movement is indeed possible,” he declared, as he urged union members to join together to defend a public Postal Service and good union jobs.

Tent City to privateers: Hands off the public commons!

The Tent City on the steps and grounds of Berkeley’s historic main post office lasted 33 days, until broken up by police onAugust 27. Two dozen campers slept in tents for a month to rally opposition to the grand theft of the people’s Post Office being engineered by Postmaster General Donahoe and his collaborators in Congress. “These post offices were paid for by our grandparents,” said one camper. “Why should they be sold off to enrich some greedy private investors?”

Postal inspectors/police came by periodically, sometimes after midnight poking flashlights into the tents, threatening to remove the camp and its banners and arrest everyone. But theTent City, calling itself Berkeley Post Office Defense, stood firm. Their message, emblazoned on banners over the entrance, said it all: “Our Post Office is Open – Let’s Keep it that Way” and “Our Post Offices – Not for Sale!”

The encampment got great media, including daily live reports from all local TV channels; articles in the New York Times, Washington Post, Nation magazine; local papers and internet. A visitor said he saw our Tent City on CNN at his home in New Jersey.

It seemed an entire city wanted to keep the Post Office

Every day dozens of passers-by signed up at the information table, to help halt the sale of the building and support the occupation. It’s like the entire city of Berkeleywanted to keep the P.O. as a public institution, stop it from being privatized, and preserve living-wage postal jobs.

Participants in the encampment included a minister, two graphic artists, a computer programmer, a retired letter carrier, a builder, musicians, a gardener, a livestreamer and a former mail handler. Some campers had no fixed place of residence.

An active support group organized hot food every night, flyers and palm cards, and a sound system. Many postal workers stopped by to visit the Tent City, including traveling letter carriers from Greensboro, North Carolina; Madison, Wisconsin; and Salem, Mass.

Protesters denounced the Postmaster General’s decision to sell or close thousands of post offices and mail processing plants, and lay off 100,000-plus postal workers. “Young people today are being robbed of future employment,” commented a camp visitor, an agricultural inspector. “What jobs will be left for my young son and my daughter?”

Destruction of the public Post Office would have a devastating effect not only on the half million postal workers, but also on the 8 million whose jobs depend directly or indirectly on the mailing industry. Today people of color make up 40% of the postal workforce; 21% are African Americans, 40% are women and 25% are veterans.

For many workers, it is one of the few places where living-wage jobs are still available in our low-pay, ‘post-industrial’ economy. The campaign to privatize and de-unionize the USPS is a threat to the livelihood of every affected worker and neighborhood. But it stands to hit hardest the elderly, the disabled, veterans, and in those rural areas and communities of color that are already suffering unemployment at Great Depression levels.

Evenings at the Tent City featured a delicious, freshly cooked dinner; a daily meeting to decide on strategy and tactics; and “movie night.” Opening night featured the acclaimed Italian-language film, Il Postino (the Postman), and later on, The Postman, a Hollywood blockbuster; Matewan, about the coal wars and union organizing in Appalachia; and a film about the Great Postal Strike that shut down the country’s mail service for a week in 1970.

There were teach-ins on the fight to save City College of SF; on the 1970 Postal Strike; and on the Debt Crisis, where big banks and finance companies are using debt to bankrupt homeowners, students and cities like Detroit. There were blues, reggae and rap jam sessions lasting till late in the afternoon.

The post office defenders also organized a march through downtown Berkeley, led by the MAG marching band and a jazz trumpeter named John, stopping for protest rallies at United Parcel Service and FedEx, which stand to gain from privatization of the USPS. Marchers took the streets, trading chants on the mic, before ending up at the Richard C. Blum Center on UC-Berkeley’s campus.

Blum, who is a U.C. regent and married to Sen. Dianne Feinstein, is also board chairman of real estate giant CBRE, which has the exclusive contract to sell off the Berkeley and other historic post offices. [See the new short book Going Postal, by investigative reporter Peter Byrne, for the slimy, self-dealing details of the ongoing campaign to sell off the Post Office for private profit. In one example, a prime parcel of USPS land inBoston was sold at a bargain price to Goldman, Sachs, one of the principal owners of CBRE.]

Working for a year to save the Post Office

The Tent City was the culmination of a year-long campaign. The entire City Council came out against selling the Berkeley Post Office, as did both houses of the California state legislature and Congresswoman Barbara Lee. The mayor said they’d sell the post office “over my dead body.” In the course of the year, many hundreds came out to demonstrate and pack the hearings, or gathered on the steps and in the lobby to sing songs celebrating the Post Office, including “Please Mr. Postman” with new lyrics, led by Berkeley entertainer Hali Hammer.

Legal action to stop the sale is under way, as well as a plan to rezone the P.O. as part of a historic district of public buildings, so it can’t be sold to private investors. Activists were heartened by a temporary victory in Stamford CT, where a judge issued a preliminary injunction to halt the sale of an historic post office.

To get involved, please contact the author at sub@sonic.net