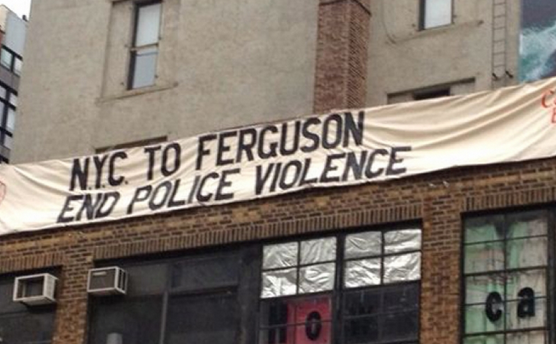 Banner by Carlito Rovira, member of the Campaign to Bring Mumia Home

Just minutes after unfurling a 50-foot banner on the side of the A.J. Muste Building in Manhattan (also dubbed the “Peace Pentagon” for the nonviolent social change organizations it houses) a friend called to tell me that two police officers had been shot, execution style, in Brooklyn. I was composing a Tweet about the banner but deleted it mid-phrase. The banner reads: “NYC to Ferguson: End Police Violence,” and it was sponsored by the Campaign to Bring Mumia Home.

My first thought was that the NYC Patrolmen’s Benevolent Association would seize on the killings as a chance to condemn the mass movements calling for police reform that have filled the streets for the last several weeks. My second thought was that our building at 339 Lafayette Street—home to grassroots groups such as the War Resisters League, the Granny Peace Brigade, Deep Dish TV and Paper Tiger TV—would be a target. The timing of our banner drop could be construed as an affront to the slain officers, especially since its sponsoring group, working to free Mumia Abu-Jamal, has long been targeted by the Fraternal Order of Police.

I took a deep breath and asked myself: What would A.J. do? Would he remove the banner? Our namesake A.J. Muste was known for his saying: “There is no way to peace—peace is the way.” He was a pacifist, anti-war activist and a leader of the civil rights and labor movements whose personal integrity won him rare, universal respect. In 1974, the A.J. Muste Memorial Institute was founded to keep A.J.’s legacy alive through ongoing support of the nonviolent movement for social change. The Institute provides grants and sponsorships to grassroots groups across the U.S. and the world, and provides office space at the Peace Pentagon to social justice organizations.

I decided that A.J. would be proud of the banner and that he would use it as an opportunity to engage in difficult conversations among individuals and organizations with varying viewpoints. The banner’s call for an end to police violence is as urgent this week as it was last week; none of the issues have changed, and the tragic murder of two New York City police officers won’t—can’t—slow our efforts to end violence, impunity and abuse of power by law enforcement.

We display banners on our building for a reason. Three days after hijackers brought down the Twin Towers in September 2001, we put up a banner reading “an eye for an eye leaves the whole world blind.” We, and the groups we support, are committed to confronting injustice—not only when it’s convenient and popular to do so, but all the time.

Our banners stand in sharp contrast to the high-end retail stores and new multi-million dollar apartments that surround us in Manhattan’s “NoHo” district, one of the most financially exclusive neighborhoods in the borough. The A.J. Muste building itself and the work of its social justice groups challenge the growing inequality in income and opportunity that marks New York City and the entire country. Decades of tireless organizing from this building are living testament to the power of the people and the positive change that can come from sustained nonviolent action.

Our movements are nonviolent, and are not to blame for the killing of Officers Liu and Ramos. The peaceful demonstrations and direct actions carried out by tens of thousands of people of all ethnicities in recent months are born of a frustration with a system that guarantees impunity to state agents who kill young African American men.

We must question the motives of those who claim our nonviolent protests are inciting criminal violence. Are they driven by concern for the lives of officers like Liu and Ramos? Or are they more interested in discrediting our movements? Such attempts to shift the blame—instead of acknowledging the need for police accountability and oversight—only fuel the public’s distrust of law enforcement and growing disillusionment in American democracy, further deepening the divide between the police and the public.

We will not be silenced. We hang this banner proudly on the Muste building, and we will continue to fill the streets with our feet and our voices, because racism and police violence are an affront to our values, and because we believe, as A.J. did, that persistent nonviolent protest will ultimately prevail in creating a more just world.