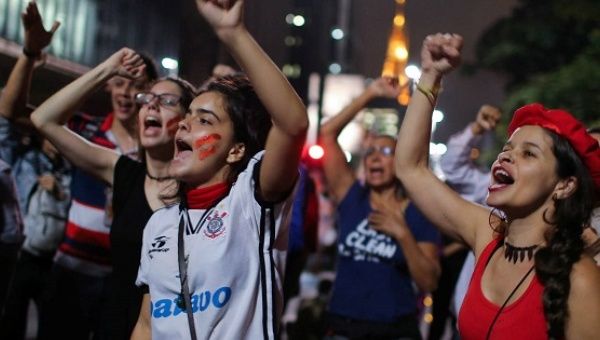 Above Photo: Archive photo of a group of women protesting against the neoliberal government of Michel Temer in Brazil. | Photo: Reuters

Upcoming elections in Latin America are opportunities for left-wing governments in the region to reconnect with social organizations, analyst Matias Bianchi told teleSUR.

According to Bianchi, from the Latin American Network for Political Innovation, the situation in Ecuador is critical, as a right-wing banker Guillermo Lasso faces a political battle against Lenin Moreno, the successor of left-wing President Rafael Correa and part of the so-called Pink Tide of progressive governments in the region.

“We can go towards more conservative governments that are implying — and now we know that it’s happening — a reversion of rights,“ said Bianchi, likening the political scenario in Ecuador to the elections in Argentina that brought businessman Mauricio Macri to power, leading to a wave of neoliberal measures.

But he added that at the same time, the region is also seeing the “emergence of progressive grassroots movements that are making bottom-up politics that in a way are fresh air for our democracies.”

Bianchi said that if Moreno hopes to win the elections and govern in Ecuador, continuing the legacy of the socially-driven administration of the last 10 years, the politician needs to redefine the party’s relationship with social groups.

“Society is demanding open dialogue, network-based movements, more horizontal relationships between leaders and society,” said Bianchi. “If the left wants to regain power, or in this case maintain power, I think they should pay attention to that.”

“These governments, even if they have contributed in education, rights, economic growth, social inclusion,” he added, “They face a contradiction with the middle class.”

The Argentine analyst argued that the region faces a crucial political moment, especially after the victory of Mauricio Macri in Argentina and the parliamentary coup against Dilma Rousseff in Brazil.

Bianchi also said that the region needs to look at self-organized groups, such as the Yo Soy 132 student movement against President Enrique Peña Nieto in Mexico, as examples to follow in building bottom-up proposals and alternatives.

Although Yo Soy 132 didn’t manage to win elections, its movement evolved into influencing electoral politics through alliances with political parties, while managing to elect some of their own members to public office.

“None of this has managed to stop the advancement of what I call de facto political powers coming back,” said Bianchi. “Even if the fail, they triggered something.”

“It’s not a coincidence that the contender in the Ecuadorian elections is a banker,” Bianchi added.

Bianchi said that democracies in the region need to include more Afro, Indigenous, LGBTI groups who have been excluded for years from the construction of the political system, and understand that winning the elections doesn’t mean they have “a blank check.”

He says they need to adapt to a new type of society which is more involved in politics and technological tools.

“Not everything is innovation just because you use technology,” said Bianchi. “We analyze how new political parties can contribute to the political system and not go unnoticed in the political scenario.”

The Latin American Network for Political Innovation is made up of 50 young politicians, activists, hackers and social leaders from the Latin American region and committed to discussing new ways to exercise democracy in the 21st century.