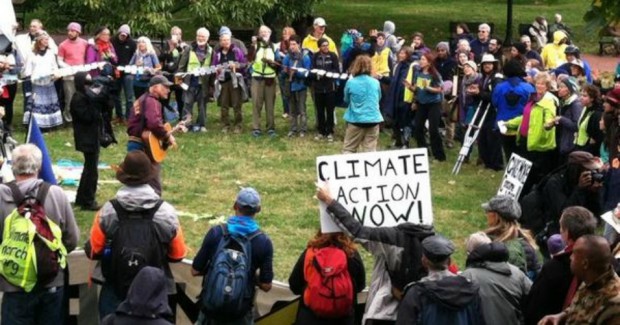 Above: Marchers rallying in Lafayette Park across from the White House after completing a 3000 mile cross-country journey. (Photo: ClimateMarch.org)

After eight months and over 3,000 miles, people marching under the banner of the Great March for Climate Action strode into Washington D.C. on Saturday declaring that they’ve seen firsthand how climate change is affecting people from coast to coast and their message is this: Americans want climate action now.

Though they were joined along the way by local residents and others supporting the cause, 34 people had completed the entire journey from the Port of Wilmington in Los Angeles to Lafayette Park in Washington D.C.. The core group walked 15-25 miles a day, 8 to 10 hours each day, allowing themselves to rest one day a week. Hundreds are expected to join the marchers at a rally outside the White House where they will recount their experience.

“I came to the March knowing a bit about climate change, but was really excited to learn the specifics about what’s going on everywhere regarding food, water and air,” one marcher, 22-year-old Emerson graduate named Sean, told Rabble.ca writer Cheryl McNamara. “And everywhere we go people talk about these things.”

A livestream of the D.C. rally is available on UStream while others are sharing images and quotes on Twitter.

McNamara, who joined the marchers for some time, wrote that the group “had walked through severe drought in the southwestern United States, cutting up to the American heartland through industrial wastelands in Nebraska and Illinois.” From there they traveled through Ohio and through heavily-fracked regions of the Pennsylvania mountains before reaching their final destination, Washington D.C.

The marchers “have born witness to those living on the front lines from coast to coast. They’ve become stewards for the people and the land, and have collected stories on behalf of the individuals facing injustices from climate change first hand,” Climate March organizers said in a press statement.

“The marchers have become stewards for the people and the land, and have collected stories on behalf of the individuals facing injustices from climate change first hand.”

The march, which kicked off with a March 1 rally in Los Angeles, “has created a living megaphone, and with the [marchers’] arrival into D.C they will amplify the collective voices with a resounding demonstration to our political leaders and corporate rulers that the people are resilient and intolerant of inaction on the climate crisis,” the organizers continue.

The Saturday rally will commence a week of actions dubbed Beyond Extreme Energy (BXE) during which demonstrators pledged to “disrupt business as usual” at the Federal Energy Regulatory Commission (FERC). The nonviolent direction actions, which were organized by a coalition of over 50 frontline communities, regional and national organizations, and concerned individuals, are to take place during election week in order to send a message to both dominant political parties that “supporting extreme energy extraction is no longer the path of least political resistance,”write activists and organizers Tim DeChristopher and Rev. Lennox Yearwood.

“It’s time to make it clear that a politician who green lights the fossil fuels industry’s attempts to poison our communities and ruin our climate will not get our votes under any circumstances,” they continue.