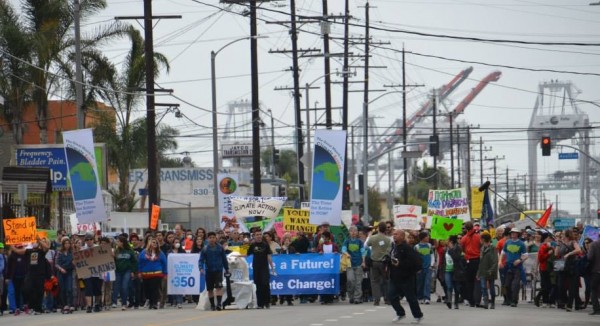 Climate change is real. Is it evidence you need? I could give you 2,500 studies done from every conceivable scientific field, as taught in the World Bank’s recent course called Turn Down the Heat, Why a 4 Degree Centigrade Warmer World Must be Avoided. I could cite a climate change (former) skeptic, Richard A. Muller, who in his 2012 New York Times op-ed, states, “it appears likely that essentially all of this increase results from the human emission of greenhouse gases.” I could give you reams of heartbreaking stories from Americans in every walk of life about how they are being impacted by extreme weather occurrences as a result of our changing climate.

But I won’t. Instead I’ll report what I see happening from my window in Homer, Alaska. I see Grewingk Glacier. For the past 17 years, I’ve witnessed it dropping in volume dramatically and rapidly. Check out Chasing Ice by James Balog or his TED talk on climate change. I know, too, that scientists from the Kachemak Bay Research Reserve in Homer are learning more about the acidification of the ocean and the devastating effect it’s having on base of the marine food chain. I’ve spoken with Native Alaskans, whose villages are eroding into the sea. Plant ranges are changing faster than the plants themselves can move and the precise timing of their cycles is shifting. Earlier spring snowmelt is reported in the north on our local public radio station KBBI. Retired professors tell me there are declines in animal and amphibian populations. We suffered through a spruce bark beetle infestation that decimated nearly 2,000,000 acres of old growth forest on Kenai Peninsula, caused largely by the doubling of that species’ reproduction due to warm weather. We’ve been having extreme weather events like drought, killer heat waves, torrential rains and repeated “100-year” floods year after year, and massive forest wildfires. We have shrinking snowpack, polar ice disintegration, melting permafrost and coastal village infrastructure damage.

In the lower 48, especially in cities, you may not enjoy the close relationship with nature that we have in Alaska. Nature is screaming at us that things are changing, and changing at a rate that many species will not survive, or already are not surviving. We are in the midst of a sixth mass extinction. I march to stave off our species being among them. I march for all of the species, wild and domestic, that need us to live in a more respectful relationship with nature. Technology may aid us in making a transition to a clean, green, and free “economology” (my term for an economy based on a close interdependence with nature, rather than a perceived dominion over nature). But we must first undergo a radical reevaluation of our moral actions with nature.

So let us begin by taking action with our policies in Washington, D.C. that guide our citizens’ actions. We march 246 days, 3000 miles to demand climate action now. We are strengthened by the hundreds of stories we are listening to along our route from people who are taking climate change personally. We are grateful for you sharing your stories with us of your good news on our Facebook group for Marchers and Virtual Marchers. We can change the climate in Washington if enough of us let Washington know what we are calling for: a clean, green, and freely energized American economology.