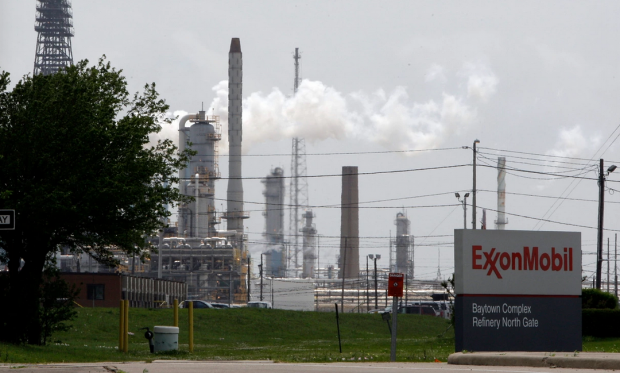 Above Photo: By 1978 Exxon’s senior scientists were telling top management that climate change was real, caused by man, and would raise global temperatures by 2-3C. Pat Sullivan/AP.

I’m well aware that with Paris looming it’s time to be hopeful, and I’m willing to try. Even amid the record heat and flooding of the present, there are good signs for the future in the rising climate movement and the falling cost of solar.

In the last three weeks, two separate teams of journalists — the Pulitzer-prize winning reporters at the website Inside Climate News and another crew composed of Los Angeles Times veterans and up-and-comers at the Columbia Journalism School — have begun publishing the results of a pair of independent investigations into ExxonMobil.

Though they draw on completely different archives, leaked documents, and interviews with ex-employees, they reach the same damning conclusion: Exxon knew all that there was to know about climate change decades ago, and instead of alerting the rest of us denied the science and obstructed the politics of global warming.

They helped organise campaigns designed to instil doubt, borrowing tactics and personnel from the tobacco industry’s similar fight. They funded “institutes” devoted to outright climate denial. And at the highest levels they did all they could to spread their lies.

To understand the treachery – the sheer, profound, and I think unparalleled evil – of Exxon, one must remember the timing. Global warming became a public topic in 1988, thanks to Nasa scientist James Hansen – it’s taken a quarter-century and counting for the world to take effective action. If at any point in that journey Exxon – largest oil company on Earth, most profitable enterprise in human history – had said: “Our own research shows that these scientists are right and that we are in a dangerous place,” the faux debate would effectively have ended. That’s all it would have taken; stripped of the cover provided by doubt, humanity would have gotten to work.

Instead, knowingly, they helped organise the most consequential lie in human history, and kept that lie going past the point where we can protect the poles, prevent the acidification of the oceans, or slow sea level rise enough to save the most vulnerable regions and cultures. Businesses misbehave all the time, but VW is the flea to Exxon’s elephant. No corporation has ever done anything this big and this bad.

I’m aware that anger at this point does little good. I’m aware that all clever people will say “of course they did” or “we all use fossil fuels”, as if either claim is meaningful. I’m aware that nothing much will happen to Exxon – I doubt they’ll be tried in court, or their executives sent to jail.

But nonetheless it seems crucial simply to say, for the record, the truth: this company had the singular capacity to change the course of world history for the better and instead it changed that course for the infinitely worse. In its greed Exxon helped — more than any other institution — to kill our planet.