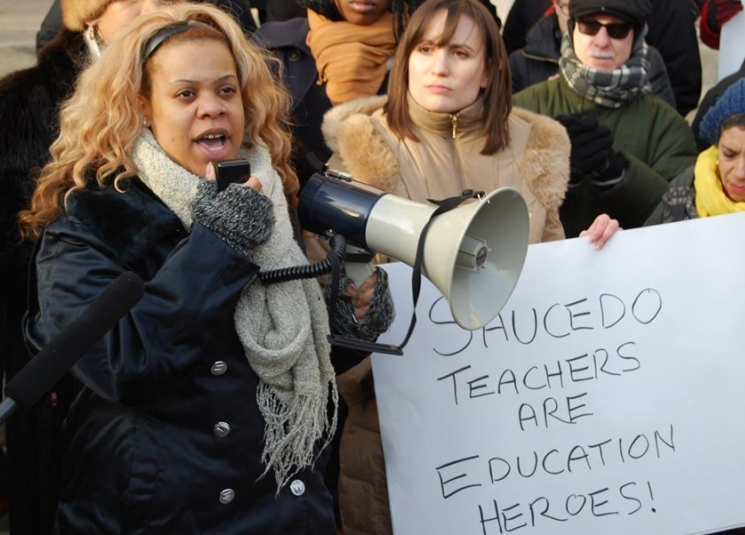 Greatest Year Of Revolt Against High-Stakes Testing In U.S. History

For too long so-called education reformers, mostly billionaires, politicians, and others with little or no background in teaching, have gotten away with using standardized testing to punish our nation’s youth and educators. They have used these tests to deny students promotion or graduation, close schools, and fire teachers—all while deflecting attention away from the need to fund the services the would dramatically improve our schools.

The year 2014 marked the greatest year of revolt against high-stakes testing in U.S. history. Across the country, students are walking out, parents are opting their children out, and teachers are refusing to administer these detrimental exams—often taking great personal and professional risk to defy the corporate education reformers. The impact of this movement can be seen in the poll released in August 2014 by Phi Delta Kappa/Gallup, which found that 54 percent of the general public said standardized tests are not helpful–the rate for public school parents was even higher, at 68 percent. To gain a full appreciation of the size and scope of this mass rebellion, check out the “Testing Reform Victories Report” from Fair Test. To gain insight into to the motivations and strategies of the leaders in this movement, order the newly released book, More Than a Score: The New Uprising Against High Stakes Testing.

Here then are my picks for the top ten most powerful acts of resistance to high-stakes, standardize testing in 2014, listed in chronological order. I hope to add your action to my list next year! Top Ten Test-defiers 2014

In what was perhaps the largest student walkout against high-stakes testing in U.S. history, hundreds of high schools students in Colorado staged a mass walk out in November refusing to take their 12th grade social studies and science tests. Overall, more than 5,000 Colorado 12thgraders refused to take the tests.

Karen Hendren and Nikki Jones teach first grade at Skelly Elementary School in Tulsa, Oklahoma and sent a beautiful letter home in November with their students explaining to the parents why they would be refusing to administer any of the standardized tests. This brave act met with immediate scorn from the school district and these teachers will need all of our support as they struggle for their students and their own jobs.

Amidst the cheers of anti-testing activists, Florida’s Lee County school board became the first district in the state to vote to opt out of all state-mandated testing—despite the fact that the state could implement sanctions for refusing to administer the tests. Ultimately those high-stakes frightened the school board into resuming the testing, however, the dramatic action changed the political landscape in Florida and prompted the State Education Commissioner to call for an “investigation” of standardized testing in Florida’s public schools to increase transparency for parents about the use of assessments and standardized tests.

Most school districts across Washington state were forced by Secretary Arne Duncan’s selective enforcement of the No Child Left Behind Act to send letters to nearly all the parents in the state informing them that their child attended a failing school. On August 2014, 28 school superintendents from around the state authored a letter of their own, where they declared that their schools’ successes are not reflected in these ratings and criticized No Child Left Behind.

In July, the thousands of educator delegates to the National Education Association’s Representative Assembly voted to demand the resignation of Secretary of Education Arne Duncan and launched “Toxic Testing” campaign that is raising awareness around the nation about the harmful effects of high-stakes testing.

The Providence Student Union has been one of the most organized and creative student groups in the nation in opposition to high-stakes testing. These students’ unrelenting efforts to expose the high-stakes testing sham—from staging a zombie march to show what the test do to your brain, to making the adults take the test and announcing their scores at a press conference—put enough pressure on the state legislature get them to vote in June for 3-year moratorium on use of high-stakes.

During the June testing season, New York State became the epicenter against high stakes testing as 60,000 parents refused to let their children be reduced to test scores and chose to opt out. One of the most prominent stories of opting out came from Castle Bridge Elementary in New York City where the test had to be canceled because over some 90% of children were opted out!

On May Day, international workers day, teachers at International High School, which serves English Language Learners, announced that they would refuse to administer a test that was culturally and linguistically inappropriate for their students. They defeated the test and were not reprimanded.

In April, three teachers at New York City’s Earth School became the first teachers in the nation to publicly refuse to administer a Common Core standardized test. They penned a beautiful letter describing their deci
sion and their vision for education.

In February, teachers at Maria Saucedo Scholastic Academy votedunanimously to refuse to administer the Illinois Standards Achievement Test (ISAT). The teachers were threatened with the revoking of their teaching certificates. However, because of the overwhelming solidarity of the parents, students, and community, they defeated the ISAT and were not reprimanded!

Jesse Hagopian teaches history and is the Black Student Union adviser at Garfield High School, the site of the historic boycott of the MAP standardized test.  Jesse is the editor and contributing author to the forthcoming book, More Than a Score: The New Uprising Against High-Stakes Testing (Haymarket Books, 2014). Jesse an associate editor for Rethinking Schools magazine, a founding member of Social Equality Educators (SEE), and recipient of the 2013 “Secondary School Teacher of Year” award from the Academy of Education Arts and Sciences. Follow Jesse on his blog at www.iamaneducator.com or on Twitter:@jessedhagopian