Greece At A Stand Still As Thousands Strike Against Austerity

Above Photo: Demonstrators briefly clash with police in Athens as a nationwide strike brings Greece to a standstill [Nick Paleologos/SOOC/Al Jazeera]

Athens, Greece – Flags and banners fluttered above a steady stream of protesters, who chanted anti-austerity slogans as they marched through the streets of the Greek capital.

Organised by labour unions, the 24-hour nationwide strike paralysed public transportation in much of the country, disrupted flight schedules and prevented many ships from setting sail.

Subways and metros were halted, and several flights were grounded. Shops, restaurants, offices and schools were shuttered throughout the capital, and public services were paused for the day.

Nikos Papageorgiou, a member of the communist-linked PAME union’s executive committee, stood in front of a massive crowd of striking union members in Omonia Square.

“This is our ninth year of crisis, and the general picture for the working class in Greece is terrible, with high unemployment and low wages,” he told Al Jazeera.

Behind him, hundreds of PAME flags trembled above the protesting workers.

During Wednesday’s strike, demonstrators marched to Syntagma Square, where the Greek parliament is located. “Down with taxes, let the capitalists pay,” one banner read.

Brief clashes between protesters and riot police broke out in parts of the city.

Pavlos Alexandros, the head of a union representing construction workers, carried a banner along with fellow protesters as they made their way to the parliament.

“Wages have shrunk a lot for construction workers [throughout the crisis],” he told Al Jazeera. “We are here fighting against this.”

Throughout the nine-year economic crisis, Greece has received several bailouts from European lenders. But the conditions of Greece’s debt relief have been the source of widespread anger among many Greeks.

In January 2015, the left-wing Syriza party came to power after campaigning on promises to support crisis-burdened workers and end austerity.

On June 14, the Greek parliament is slated to vote on the next round of economic reforms. 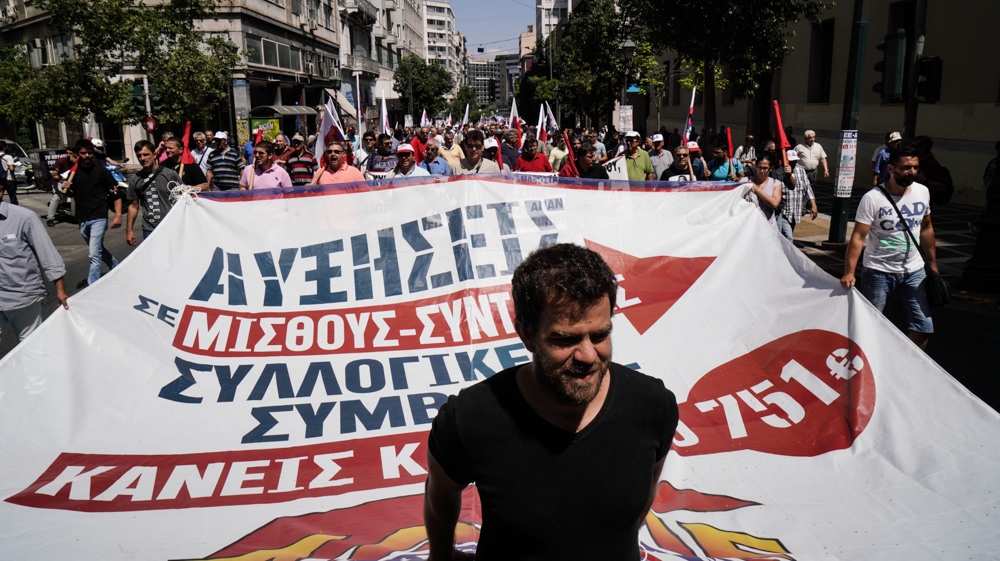 With workers struggling more and more to make ends meet and many former Syriza voters feeling betrayed by the party’s reneging on its promises, support for Tsipras and his party have declined.

The next national elections are scheduled to take place in 2019.

According to a poll published by Greece’s Skai TV last month, Syriza’s support was 21.5 percent, putting it 10 points behind the right-wing New Democracy, the largest opposition party in the parliament.

The centre-left Movement for Change was polling at nine percent, while the neo-fascist Golden Dawn held eight percent and the Communist Party of Greece (KKE) sat just above six percent.

Despite New Democracy’s lead in that poll, the survey also suggested that a growing number of Greeks – more than 40 percent – were disillusioned with both the centre-right party and Syriza.

During a visit to the southeastern European country last month, European Commission President Jean Claude-Juncker claimed Greece was on track to become a “normal country” by the end of the summer.

‘We want those jobs back’

Although Greece’s bailout is expected to end in August, many workers and cash-strapped Greeks fear their economic crisis is far from over.

Argiri Erotokritou, who sits on the steering committee of a union representing public healthcare workers in Athens, said the burden of “exiting the memorandum has been placed on the working class”.

“Today, we want to send a clear message to the government that exiting the memorandum should also mean the end of austerity,” she told Al Jazeera at Wednesday’s demonstration. 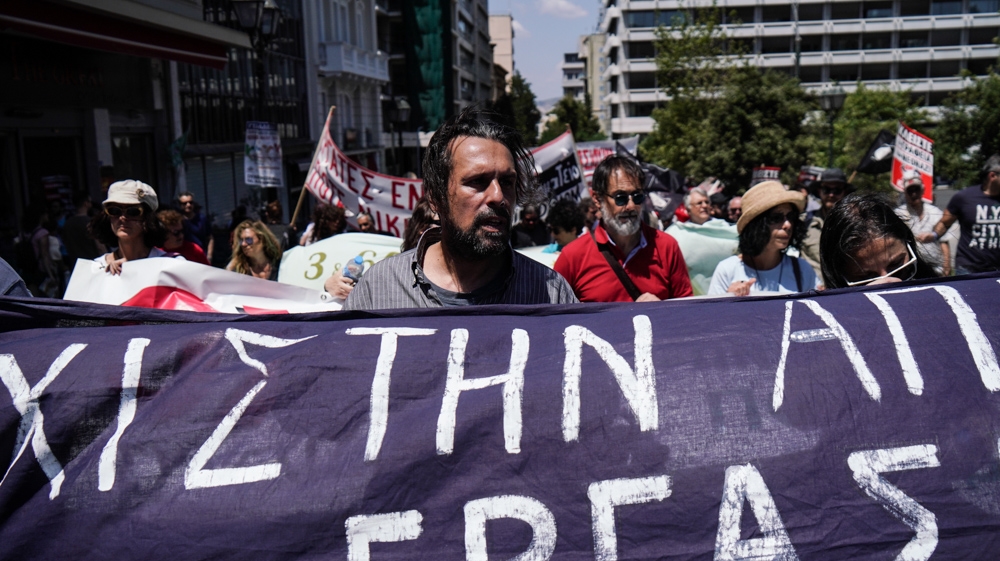 Explaining that tens of thousands of workers have been laid off from public hospitals in the last eight years, she added: “If they want to say that the crisis is over, then we want those jobs back.”

Along with several others, Mihali Zervos, an organiser with a union of short-term workers in Greece’s culture ministry, held a banner that read: “Say no to unpaid work!”

As the crowd advanced through the capital, Zervos explained that short-term contracts have become increasingly common for workers in the cultural industry.

“We can’t plan our lives on a series of short-term contracts,” he told Al Jazeera. “We want work for everyone – not temporary work, just the permanent work that they deserve.”

Zervos concluded: “Today’s strike is about everybody … And we will fight until the end.”