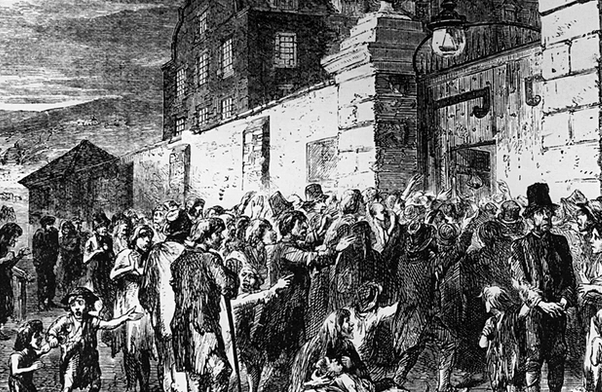 Starving people clamour at the gates of a workhouse during the Irish famine,’One eighth of the population was killed – one could almost say murdered – by the British refusal [to set] policies that offended the holy doctrine of laissez-faire economics.’ Photograph: Hulton

Greece may be financially bankrupt, but the troika is politically bankrupt. Those who persecute this nation wield illegitimate, undemocratic powers, powers of the kind now afflicting us all. Consider the International Monetary Fund. The distribution of power here was perfectly stitched up: IMF decisions require an 85% majority, and the US holds 17% of the votes.

The IMF is controlled by the rich, and governs the poor on their behalf. It’s now doing to Greece what it has done to one poor nation after another, from Argentina to Zambia. Its structural adjustment programmes have forced scores of elected governments to dismantle public spending, destroying health, education and all the means by which the wretched of the earth might improve their lives.

The same programme is imposed regardless of circumstance: every country the IMF colonises must place the control of inflation ahead of other economic objectives; immediately remove barriers to trade and the flow of capital; liberalise its banking system; reduce government spending on everything bar debt repayments; and privatise assets that can be sold to foreign investors.

Using the threat of its self-fulfilling prophecy (it warns the financial markets that countries that don’t submit to its demands are doomed), it has forced governments to abandon progressive policies. Almost single-handedly, it engineered the 1997 Asian financial crisis: by forcing governments to remove capital controls, it opened currencies to attack by financial speculators. Only countries such as Malaysia and China, which refused to cave in, escaped.

Consider the European Central Bank. Like most other central banks, it enjoys “political independence”. This does not mean that it is free from politics, only that it is free from democracy. It is ruled instead by the financial sector, whose interests it is constitutionally obliged to champion through its inflation target of around 2%. Ever mindful of where power lies, it has exceeded this mandate, inflicting deflation and epic unemployment on poorer members of the eurozone.

The Maastricht treaty, establishing the European Union and the euro, was built on a lethal delusion: a belief that the ECB could provide the only common economic governance that monetary union required. It arose from an extreme version of market fundamentalism: if inflation were kept low, its authors imagined, the magic of the markets would resolve all other social and economic problems, making politics redundant. Those sober, suited, serious people, who now pronounce themselves the only adults in the room, turn out to be demented utopian fantasists, votaries of a fanatical economic cult.

Those sober, suited, serious people turn out to be demented utopian fantasists, votaries of a fanatical economic cult

All this is but a recent chapter in the long tradition of subordinating human welfare to financial power. The brutal austerity imposed on Greece is mild compared with earlier versions. Take the 19th century Irish and Indian famines, both exacerbated (in the second case caused) by the doctrine oflaissez-faire, which we now know as market fundamentalism or neoliberalism.

In Ireland’s case, one eighth of the population was killed – one could almost say murdered– in the late 1840s, partly by the British refusal to distribute food, to prohibit the export of grain or provide effective poor relief. Such policies offended the holy doctrine of laissez-faire economics that nothing should stay the market’s invisible hand.

When drought struck India in 1877 and 1878, the British imperial government insisted on exporting record amounts of grain, precipitating a famine that killed millions. The Anti-Charitable Contributions Act of 1877 prohibited “at the pain of imprisonment private relief donations that potentially interfered with the market fixing of grain prices”. The only relief permitted was forced work in labour camps, in which less food was provided than to the inmates of Buchenwald. Monthly mortality in these camps in 1877 was equivalent to an annual rate of 94%.

As Karl Polanyi argued in The Great Transformation, the gold standard – the self-regulating system at the heart of laissez-faire economics – prevented governments in the 19th and early 20th centuries from raising public spending or stimulating employment. It obliged them to keep the majority poor while the rich enjoyed a gilded age. Few means of containing public discontent were available, other than sucking wealth from the colonies and promoting aggressive nationalism. This was one of the factors that contributed to the first world war. The resumption of the gold standard by many nations after the war exacerbated the Great Depression, preventing central banks from increasing the money supply and funding deficits. You might have hoped that European governments would remember the results.

Today equivalents to the gold standard – inflexible commitments to austerity – abound. In December 2011 the European Council agreed a new fiscal compact, imposing on all members of the eurozone a rule that “government budgets shall be balanced or in surplus”. This rule, which had to be transcribed into national law, would “contain an automatic correction mechanism that shall be triggered in the event of deviation.” This helps to explain the seigneurial horror with which the troika’s unelected technocrats have greeted the resurgence of democracy in Greece. Hadn’t they ensured that choice was illegal? Such diktats mean the only possible democratic outcome in Europe is now the collapse of the euro: like it or not, all else is slow-burning tyranny.

It is hard for those of us on the left to admit, but Margaret Thatcher saved the UK from this despotism. European monetary union, she predicted, would ensure that the poorer countries must not be bailed out, “which would devastate their inefficient economies.”

But only, it seems, for her party to supplant it with a homegrown tyranny. George Osborne’s proposed legal commitment to a budgetary surplus exceeds that of the eurozone rule. Labour’s promised budget responsibility lock, though milder, had a similar intent. In all cases governments deny themselves the possibility of change. In other words, they pledge to thwart democracy. So it has been for the past two centuries, with the exception of the 30-year Keynesian respite.

The crushing of political choice is not a side-effect of this utopian belief system but a necessary component. Neoliberalism is inherently incompatible with democracy, as people will always rebel against the austerity and fiscal tyranny it prescribes. Something has to give, and it must be the people. This is the true road to serfdom: disinventing democracy on behalf of the elite.