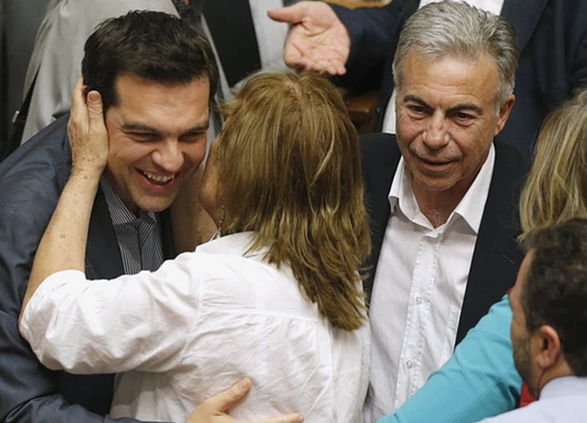 Alexis Tsipras has won crucial approval from the Greek parliament for the €13bn of austerity measures he is proposing to creditors, to obtain a third bailout programme.

After a late-night debate, 250 MPs out of 300 voted to give Tsipras, and finance minister Euclid Tsakalotos, a mandate to negotiate this weekend.

But, two Syriza MPs voted no, eight abstained, and seven were absent, potentially undermining the PM’s authority at a critical time.

Before the vote, Alexis Tsipras described the last few months as a war in which difficult battles were fought and some were lost.

“Now I have the feeling we’ve reached the demarked line. From here on there is a minefield,”

Tsipras also admitted that the package of tax rises and pension reforms do not match the pledges he ran for office on in January.

But he pledged that some of the measures would help the economy,eliminate the danger of Grexit, and lead to meaningful discussion on debt relief:

“For the first time, we have on the table a substantial discussion for a debt restructuring.”

According to reports, some creditors have decided that Greece’s plan is serious enough to merit discussion on a third bailout

EU and IMF officials have given euro zone governments a positive assessment of Greece’s request for a new bailout, a source close to the matter said, making it likely they will agree on Saturday to open talks on lending Athens tens of billions of additional euros.

Eurozone finance ministers will discuss the issue at a Eurogroup meeting on Saturday. Diplomats have told the Guardian that there is no guarantee of a third aid package. Grexit is still a serious possibility, they say.

And there were protests outside parliament tonight, by groups opposed to a new austerity package.

Although the bill has passed with a big majority, 250 out of 300, the big question is how the coalition split.

Some eight Syriza MPs abstained, two voted no, and seven didn’t turn up.

The scale of the rebellion is a blow to Alexis Tsipras, and raises doubts over his ability to get these measure put into law.

BUT, this wasn’t a formal vote of confidence. So you can’t assume that these MPs would rebel on a knife-edge vote that could bring the government down.

But analysts are suggesting that this could force a government shake-up.