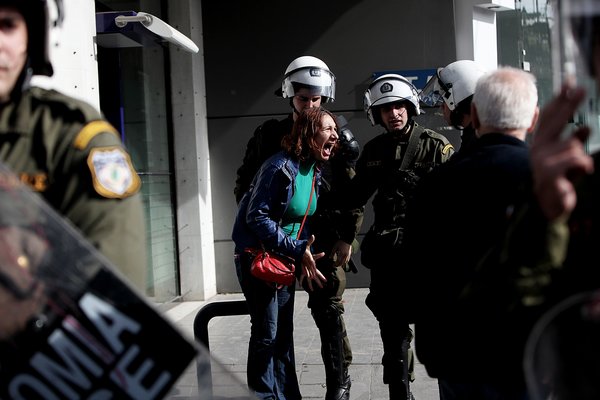 Despite the growing authoritarianism of the Greek state, the rise of autonomous media makes the voice of the people increasingly difficult to drown out.

Just before dawn this morning, at 4am, eight squads of riot police stormed the headquarters of Greece’s former public broadcaster ERT in Athens. The station had been occupied by its workers since June this year, following an unprecedented presidential decree that effectively shut down the former state broadcaster overnight. The government order triggered mass protests and prompted the station’s 2.600 employees, who were set to lose their jobs from one day to the next, to defy state orders and resume broadcasting under workers’ control. When riot police assaulted and shut down the station’s transmission antennas, the workers continued broadcasting online.

But today, in images reminiscent of the military dictatorship that ruled the country from 1967 to ’74, an army of riot police cordoned off the building and forcibly removed the 50 workers and journalists who were guarding the offices and studios inside. When a spontaneous solidarity demonstration of some 200 people formed outside, police used teargas to disperse the crowd. A dramatic radio broadcast relays the final minutes of the station as the presenter continued his show until he was physically removed from the microphone by police. At least four people were arrested, including the head of the ERT employees’ union.

Following the occupation of the station last June, the workers had decided in a democratic assembly to start providing an alternative voice in Greece’s corporate-controlled and pro-government media landscape. As one ERT veteran described the experiment after spending a month at the occupied station, the worker-run ERT “was not professional but it was a good effort. Many people thought that it was for the first time a free voice, an anti-government voice from the state TV, from the public TV that used to be controlled by the government.”

It is precisely for this reason that Samaras’ government decided to shut it down. The occupied ERT, despite facing enormous challenges — like having its phonelines cut off, lacking any financial resources, its journalists being prevented by police from taking out cameras, and so on — the station’s workers were actively crafting a popular alternative to the mainstream media’s propagation of public and private interests. The occupied ERT had not only become an informational antidote to the propaganda of the corporate and political elite, but also an example of autonomous self-organization in a climate of economic collapse, fierce austerity and violent police repression.

In this sense, the occupied ERT was part of an emerging wave of independent media projects that arose from the December uprising of 2008 and the 2010-’12anti-austerity protests to give a voice to popular concerns. From small activist media collectives like Mind the Cam, which grew out of the multimedia team at the occupation of Syntagma Square in 2011, to autonomous radio stations likeRadioBubble and political magazines like HotDoc and Unfollow, which focus on investigative reporting. Some of these independent media outlets, like the web-based Press Project, have recently begun publishing in English to inform the outside world about the reality on the ground in Greece.

As a frontpage article in the international New York Times reported last week, these new voices are popping up in response to the total loss of trust in the country’s traditional media. The tightly controlled Greek media landscape remains firmly in the hands of the country’s oligarchic elite, which in turn has close political ties to the ruling neoliberal coalition of Prime Minister Antonis Samaras — which is on its own turn a loyal servant of foreign powers and international financiers. The Greek media are an ideological keystone in the crumbling edifice of the transnational class coalition that is now sucking Greek society dry with its insistence on full debt repayment.

In this climate, autonomous self-organization is seen by many — also outside of journalistic circles — as the only feasible alternative. Earlier this year, in one of the most widely publicized grassroots initiatives, the workers of Vio.Me near Thessaloniki occupied their factory and resumed production under workers’ control. A mapping project by Solidarity for All shows that many other self-organized initiatives are taking off across the country. Most notably, autonomous health clinics and solidarity kitchens are springing up everywhere as doctors, healthworkers, humanitarians and ordinary citizens resort to mutual aid to safeguard the health and living standards of their neighbors.

The Greek government is now in the middle of negotiations with the Troika of foreign lenders to “agree” upon even harsher austerity measures, as the country seems to be on course for a third international bailout of $11 billion next year. These negotiations, in turn, are taking place to a background of deepening social unrest. This week, Greece was paralyzed by its 30th general strike since the crisis began, and just last week the country was rocked by the professional assassination of two members of the neo-Nazi Golden Dawn party, in what some claim to be a leftist attack to avenge the murder of anti-fascist hip hop artist Pavlos Fyssas by Golden Dawn hitmen last September.

Whether or not the attack on the occupied ERT will trigger a renewed wave of popular protest remains to be seen. Many Greeks are simply caught in the headlights of the government’s frontal assault on their living standards. The economy has collapsed by 20% since the crisis began and unemployment now stands at nearly 28%, while for young people the rate has risen to a shocking 60%. The healthcare budget has been cut by 50% and hospitals are running out of medicine and equipment to treat their patients. As a Greek friend and movement organizer put it to me the other day, in such desperate conditions, “the immediate concern is survival, not revolution.”

That said, it is now self-evident that the center cannot hold forever. Even at the occupied ERT, the resistance of the workers continues. At least one unnamed former employee reportedly managed to sneak past police lines and hide himself in the headquarters. In an interview by phone, he told the BBC that he hoped to be able to make a broadcast later, “because it’s for democracy. We feel like we are Robin Hood,” the journalist declared. “We are the voice of the people.” Despite the growing authoritarianism of the Greek state, it seems that the recent rise of autonomous media makes this voice increasingly difficult to drown out.