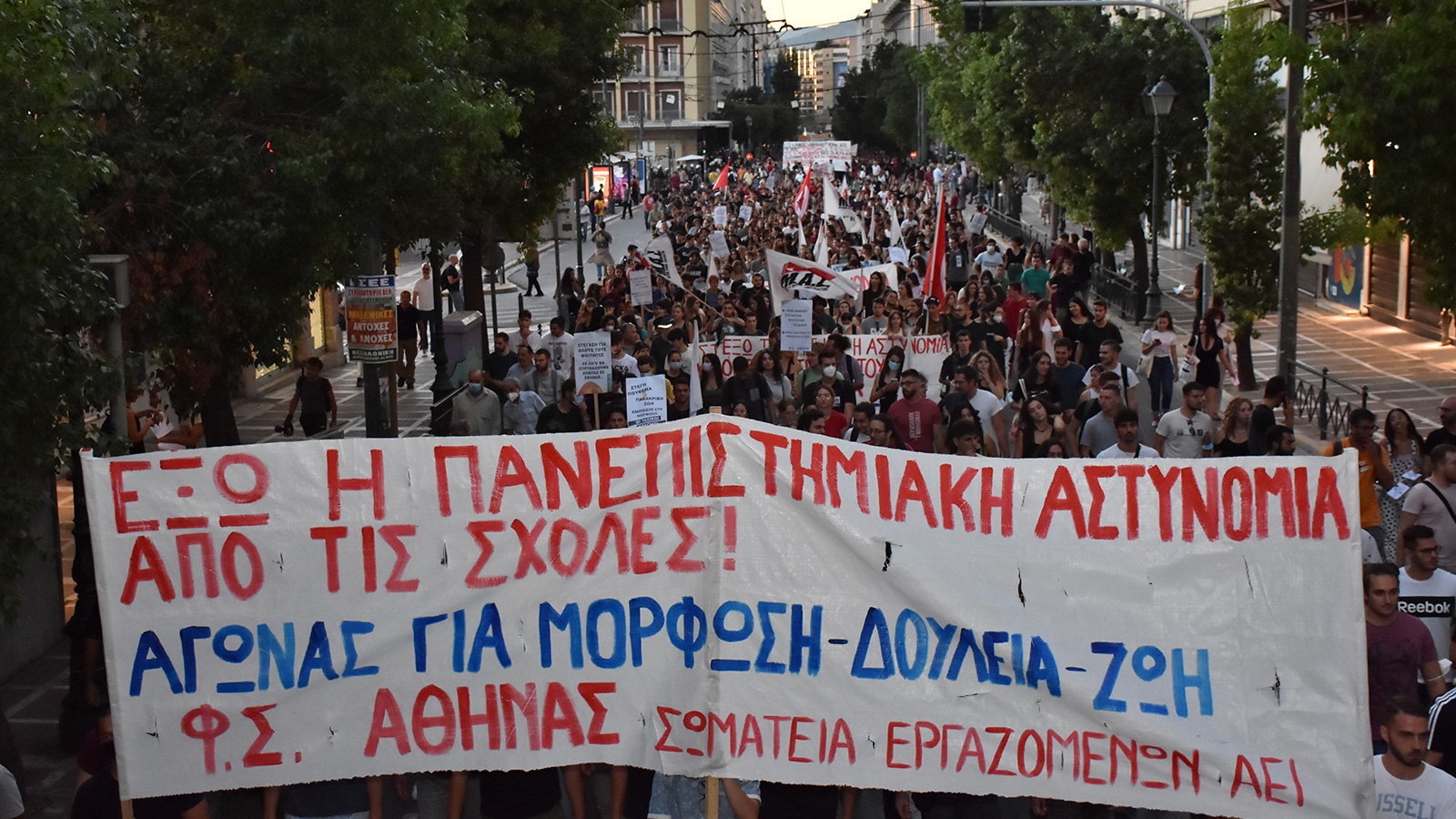 Above Photo: Protests against the University Police in Athens. 902.gr.

Greece – On Thursday, September 8, students, teachers and other university workers took out a massive rally in the Constitution Square in Athens protesting the deployment of police on campuses. Activists from the Students Struggle Front (MAS) and Communist Youth of Greece (KNE) were among those who participated in the mobilization.

They condemned the conservative New Democracy (ND)-led government’s bid to put the university campuses under police surveillance. The protesters in Athens denounced the deployment of ‘University Police’ at the National Technical University of Athens (NTUA), Athens University of Economics and Business Administration and National and Kapodistrian University of Athens. Protests and marches were also held in Thessaloniki against the presence of riot police at the Aristotle University of Thessaloniki. The Communist Party of Greece (KKE) expressed solidarity with the students and condemned the deployment of police in universities.

According to reports, the University Institutions Protection Teams (OPPI) have been deployed in the four major universities in Athens and Thessaloniki on a pilot basis. This is part of the government’s plan to supposedly protect campuses from anarchism and vandalism. In order to resist students’ protest against the OPPI – who have been termed ‘University police’ – riot police have also been deployed on certain campuses. Progressives in Greece have already criticized the deployment of the University police as a right-wing ploy to subjugate free speech, dissent and radical student politics on campuses. Earlier in 2019, the ND government revoked the prohibition on police from entering university spaces.

Greece has a history of radical students’ movements and campus uprisings, the Athens Polytechnic Uprising of November 1973 being the most famous example. The deployment of the University police and increased surveillance of academic spaces has been widely perceived as an attempt to thwart radical mobilizations on campuses against the anti-people policies of the government.

In a statement issued on September 6, the MAS called on the University police to leave the campuses. It said that at a time when thousands of students do not know if they will be able to continue their education and despite the lack of dormitories, soaring rents and poor university funding, the government has allocated 50 million euros for the university police and for cameras and turnstiles inside campuses.

“We call on all students of the country to strengthen the fight for the education they need against the plans to intensify repression!  Our schools and universities don’t need the police; we need more infrastructure, teachers, dormitories, classrooms and books!” added the students’ organization.

The Communist Youth of Greece (KNE) called on the government to redirect the money to cover the real needs of students such as mass recruitment of professors, dormitories and modern infrastructure.