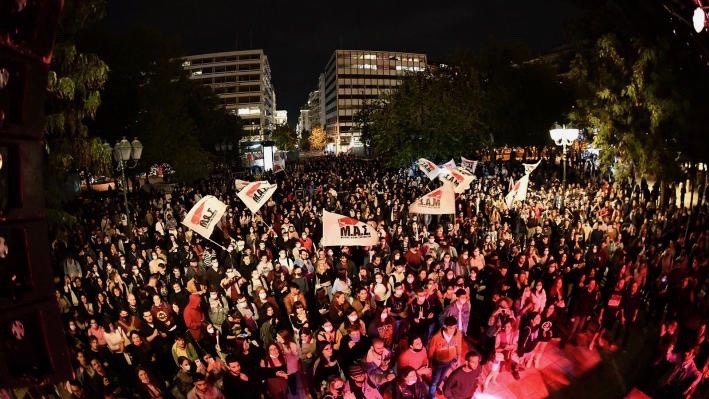 Above Photo: Anti-fascist demonstration at the Syntagma Square in Athens, Greece. 902.gr.

On anniversary of ban on Golden Dawn.

The neo-Nazi Greek fascist party Golden Dawn was declared a criminal organization by a Greek court last year, which convicted its leadership for involvement in multiple hate crimes, including the murder of Greek rapper Pavlos Fyssas

On the occasion of the first anniversary of the banning of Greek fascist party Golden Dawn, progressive sections organized massive mobilizations across the country on Thursday, October 7, resolving to strengthen the fight against fascism and the system that gives birth to it. The demonstrations, mainly called by student and youth organizations, included concerts and other cultural activities. Trade unionists from the All Workers Militant Front (PAME) and cadre of the Communist Party of Greece (KKE) also participated in the mobilization in addition to people from all walks of life. Major mobilizations were witnessed in the capital Athens and cities like Thessaloniki, Patras, Alexandroupolis, Heraklion, Kavala, Chania, Drama, Xanthi and Igoumenitsa.

In a historic judgement last year, a Greek court deemed the neo-Nazi party Golden Dawn as a criminal organization and convicted its leadership for running a criminal organization. The verdict was given in multiple cases of hate crimes, including the murder of 34-year-old Greek musician Pavlos Fyssas in 2013, and cases regarding the attempted murder of migrant fishermen and attacks on leftist activists. Progressive sections in Greece, Cyprus, and around the world hailed the verdict. Golden Dawn was founded in 1985 and gained some electoral success during the Greek debt crisis (2009-2018). However, in the 2019 legislative elections, Golden Dawn lost all its 18 parliamentary seats.

While addressing the Greek Parliament on Thursday, KKE general secretary Dimitris Koutsoumbas said, “A year ago, the conviction of Golden Dawn met the demand of the people and youth, as expressed in the magnificent gathering at the Court of Appeal. At that time, the Greek Communist Party stated that no complacency is allowed, a position that was confirmed a year later, proving that fascist groups were and remain a multi-tool of the system that does not hesitate to use it against fighters and communists who are on the frontlines of the popular struggles.”

He condemned the Greek government’s passivity towards containing fascist groups, as seen during the fascist attacks in Thessaloniki. He also denounced the anti-communist policy of the European Union (EU) which “equates fascism with communism, which goes so far as to equate criminal Nazi violence with the struggles of the people and the youth.”

Over the last two weeks, in separate incidents, fascist gangs attacked students, including members of the Students Struggle Front (MAS), in schools in Stavroupoli, cadres of the KKE and the Communist Youth of Greece (KNE) in Ilioupoli and Thessaloniki, as well as in the south of Heraklion in Attica. Such attacks by fascist gangs led to widespread outrage across the country and spontaneous protests were organized by youth/students groups across the country to demand strict punishment for the perpetrators.