Belgium – The Trump administration has withdrawn the US from the 1987 Intermediate-range Nuclear Forces (INF) treaty and both the US and Russia are building more nuclear weapons. A nuclear arms race has ignited and people are protesting. In Europe, protests were held at a military base that included three Members of the European Parliament (MEPs) who were arrested. They unfurled a banner on a runway for F-16 fighter jets at the Kleine Brogel base in east Belgium calling for a nuclear-free Europe, before being taken into custody. 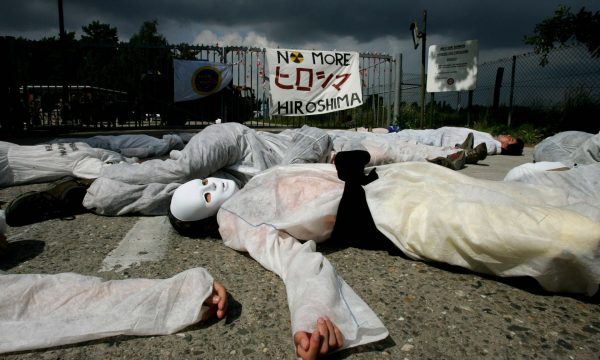 Activists protest in front of Kleine-Brogel military base near Peer in Belgium. Photograph by François Lenoir for Reuters.

The Guardian reports, another Green MEP, Thomas Waitz of Austria, was arrested in a demonstration outside the base, along with 11 other activists from the Belgian peace group Agir pour la Paix (Act for Peace), three of whom also scaled a 3.5-metre fence to get into the base.

MEPs in Brussels enjoy some immunity from prosecution but it is unclear if this would cover state security laws, which carry potential five-year prison sentences.

The protest was at the Kleine Brogel airbase, home of Belgians 10th Tactical Wing, which operates US-built aircraft capable of delivering nuclear weapons. It is also home to a US munitions support squadron, which is thought to maintain the nuclear weapons at the base. This includes the B61 which has an explosive yield of up to 340 kilotons, 23 times more powerful than the bomb that devastated Hiroshima. About 150 US nuclear weapons are thought to be scattered across Europe in Belgium, Germany, Italy, and the Netherlands, compared with more than 7,000 at the peak of the cold war, reports The Guardian.

“Our action is intended to challenge EU countries to remove US nuclear weapons from European soil.

“Each B61 bomb is 23 times more powerful than the bomb that devastated Hiroshima. These apocalyptic weapons should find no home in Europe.

“We demand that Europe’s nuclear nations immediately sign up to the landmark global Treaty on the Prohibition of Nuclear Weapons and begin the process of decommissioning their nuclear arsenals.”

Huge solidarity with Green colleagues putting their bodies on the line to oppose nuclear weapons & prevent an arms race.

They’re demanding:
☢️withdrawal of US nuclear bombs in Europe
🚫ratification of #Nuclearban Treaty by all EU countries
☮️a nuclear-weapon-free zone in Europe https://t.co/69Qa6bCdhi

Pleased to join the anti-nuclear campaigners outside parliament today, calling on Government to join 122 other countries in supporting the UN #nuclearban #globalban @ICAN_UK ⁦@CNDuk⁩ pic.twitter.com/iltO06eFRa

Bravely done Molly and the others. The majority of the world’s nations are calling for a #globalban on nuclear weapons. The single most important step for global #security. @nuclearban @CNDuk https://t.co/ZTvZslC9Jq

“Today, 15,000 nuclear weapons are still in circulation in the world and about twenty nukes are still present at the Kleine-Brogel military base. Yet everyone seems to have forgotten their presence and most importantly, their danger. However, the bombs stored in Belgium have an adjustable power ranging from 1Kt to 340 Kt, or up to 26 times the power of the bomb Hiroshima. A secret bilateral agreement between an EU Member State and the US is an imposed choice of extreme violence imposed on the Belgian and European people. These bilateral agreements leave no room for democratic debate and genuine consideration of citizens. That is why we join activists today in civil disobedience because we believe the public interest is under threat.”

The protest by the MEPs comes in the context of the Belgian Greens making significant gains in October’s Belgian local elections. They are expected to do well in the country’s coming federal elections scheduled for May of this year. Greens in other European countries including Germany and the UK are also making gains. Greens top opinion polls in Belgium, while across northern Europe they are growing in power. In recent elections in Bavaria, the Greens won 18% of the vote and became the second-largest party and in Hesse, they won 20% of the vote. Nationally the Greens have overtaken the Social Democrats in nationwide opinion polls. In Luxembourg, Belgium and the Netherlands, Green parties have also gained support and they are seeking to make gains in the EU elections in May. They are being seen as the opposite of the right-wing nationalist parties and more legitimate than the longer serving centrist parties who people have lost faith in and are pulling Euro-politics to the left.