The Green New Deal is the most popular policy hardly anyone has heard of yet.

Eighty-two percent of Americans say they have heard “nothing at all” about the sweeping proposal to generate 100 percent of the nation’s electricity from clean sources within the next 10 years, upgrade the United States’ power grid, invest in energy-efficiency and renewable technology, and provide training for jobs in the new, green economy.

But when asked “how much do you support or oppose” the aforementioned suite of policies, 81 percent of registered voters say they either “somewhat support” or “strongly support” the plan, according to new survey results shared exclusively with HuffPost from the Yale Program on Climate Change Communication and George Mason University.

“Given that most Americans have strong support for the components and ideas of the Green New Deal, it becomes a communication strategy problem,” Abel Gustafson, a postdoctoral associate at Yale who co-authored a report on the findings, said by phone Sunday. “From here, it’s about how you can pitch it so you can maintain that bipartisan support throughout the rest of the process.” 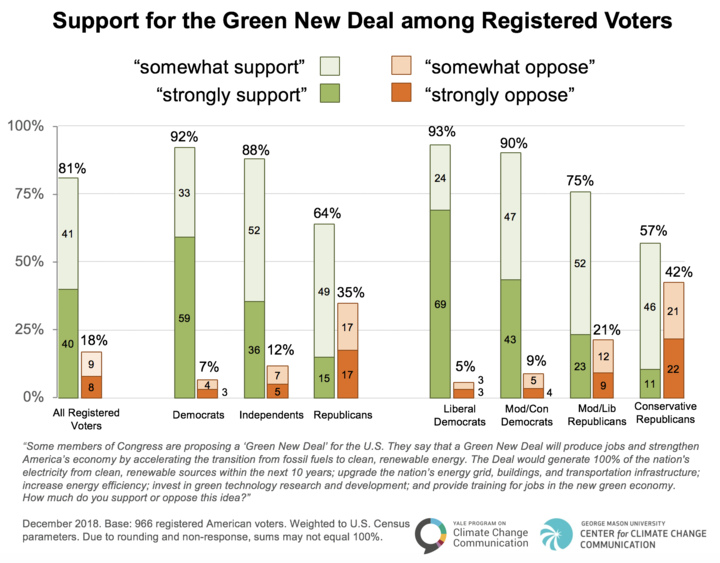 The survey’s description of the Green New Deal’s tenets did not mention that more than 40 progressive members of Congress are championing the policy. The group includes Rep.-elect Alexandria Ocasio-Cortez (D-N.Y.), Rep. John Lewis (D-Ga.) and Sen. Jeff Merkley (D-Ore.).

Study after study shows Americans evaluate policies more negatively when they are told politicians from an opposing party back the ideas, and more positively when they are told politicians from their own party are in support. The findings therefore indicate that although most Republicans favor the Green New Deal in principle, they are not yet aware that the plan is proposed by the political left.

The survey ― administered online to 966 registered voters, with a margin of error of +/- 3 percentage points ― was performed from Nov. 28 to Dec. 11.

Support could erode if debate over the policy becomes more partisan, which seems likely. No Republican lawmakers have backed the Green New Deal. Most moderate and conservative Democrats have not said they support the idea, either.

“It matters how the Green New Deal is communicated in the future,” Gustafson said. “If it becomes more partisan and right-versus-left, we could see support drop from Americans on the right.”

The polling, published in The New York Times, came from Data for Progress, the left-leaning think tank behind the most comprehensive blueprint for a Green New Deal to date. 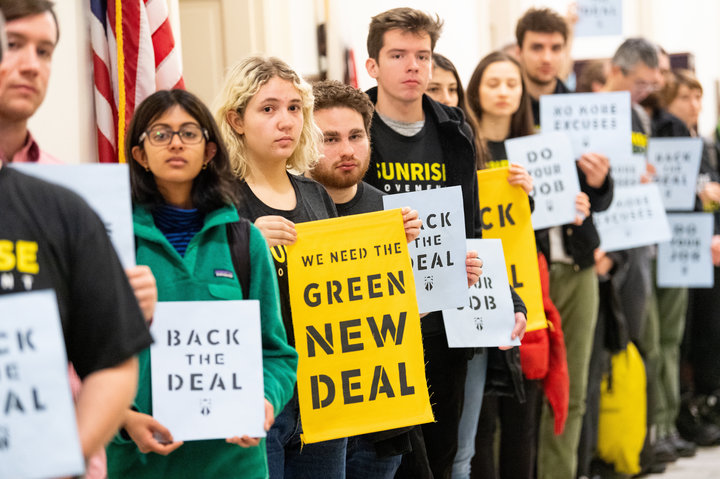 WASHINGTON, DC, UNITED STATES – 2018/12/10: Protesters seen holding placards during the Sunrise Movement protest inside the office of US Representative Nancy Pelosi (D-CA) to advocate that Democrats support the Green New Deal, at the US Capitol in Washington, DC. (Photo by Michael Brochstein/SOPA Images/LightRocket via Getty Images)

That made the latest findings on the Green New Deal ― one of the first major national surveys to use that term specifically ― “exciting but not necessarily surprising,” Gustafson said.

“The way we described the Green New Deal in our survey was by emphasizing the qualities that resonate with both sides, that it creates jobs and strengthens America’s economy and also accelerates the transition from fossil fuels,” he said. “We’re not surprised that conservatives support those things.”

Other polls show strong support for guaranteeing green jobs to unemployed Americans, a policy increasingly discussed as a vehicle for a Green New Deal but one that the Yale survey did not explicitly cite. In September, Data for Progress released polling that found 55 percent of eligible U.S. voters supported a jobs guarantee, while 23 percent opposed. When the jobs are green, that support remained the same, but the share of those outright opposed fell to 18 percent.

“Democrats, Republicans and independents alike understand that they live on the same planet, the same country,” Corbin Trent, a spokesman for Ocasio-Cortez, said when read the Yale survey results over the phone. “We need highways, jobs and improved infrastructure, and we need a 100 percent renewable-energy economy.”

It matters how the Green New Deal is communicated in the future. If it becomes more partisan and right-versus-left, we could see support drop from Americans on the right.Abel Gustafson, Yale Program on Climate Change Communication

The Green New Deal barreled into mainstream political discourse a little over a month ago after languishing for more than a decade on the fringes of policy debates. A new wave of progressive Democrats reclaimed the term ahead of November’s midterm election to describe the type of large-scale economic mobilization scientists say is required to keep global warming within 2.3 degrees Fahrenheit, beyond which sea-level rise and extreme weather are forecast to be catastrophic.

In November, protesters with the left-wing groups Sunrise Movement and Justice Democrats occupied top Democrats’ offices to demand party leadership make climate change a top priority in the next Congress. Ocasio-Cortez, who campaigned on a democratic socialist vision of climate action, proposed establishing a select committee in Congress to shape a Green New Deal. Thirty-seven incoming or sitting House members pledged to support the plan.

On Friday, more than 300 state and local elected officials voiced their support for a Green New Deal in an open letter.

The legislative path forward remains unclear, but the Green New Deal is shaping up to be a major 2020 issue. Richard Ojeda, the failed West Virginia congressional candidate now running for president, said he supports the policy. Two likely contenders for the Democratic presidential nomination ― Sens. Bernie Sanders (I-Vt.) and Cory Booker (D-N.J.) ― came out in support of a Green New Deal. Merkley, another potential 2020 hopeful, was among the first to back the plan.