The “RESIST” message was courtesy of seven Greenpeace activists, who pulled off a spectacular banner drop from the top of a 270-foot crane in downtown Washington, DC. They scaled the crane in early pre-dawn hours and unfurled their bright yellow, orange and black-lettered banner spelling “RESIST” during morning rush hour. Police closed surrounding streets below while hundreds gazed up at the banner billowing in the breeze.

The 70 x 35′ banner contained an orange rising sun and could easily be seen as far as half a mile away. Five climbers carried out the banner drop, while two others climbed 100 feet up the crane arm to block access from the cab by the crane operator.

The crane hovers over the site of the old Washington Post building, which was torn down last summer to build the new Fannie Mae investment facility.

The activists picked the site because it was close to the White House and within view. By choosing this location, Greenpeace is throwing down the gauntlet, according to press officer Jason Schwartz.

“It’s the kind of action that we plan on carrying out for the next four years,” he said. With the banner drop, he continued, Greenpeace is sending a message of encouragement to communities across the country, who may fear the consequences of Trump administration policies.

Karen Topakian, Chairperson of the Board of Greenpeace, Inc., broadcast on Facebook Live from the crane 100 feet above the ground. She said she was afraid of heights, but took part in the action to “get out of [her] comfort zone to resist.”

“People in this country are ready to resist and rise up in ways they have never done before,” Topakian said in a press release. “While Trump’s disdain and disrespect for our democratic institutions scare me, I am so inspired by the multigenerational movement of progress that is growing in every state.” She went on to compare Trump to “tyrannical bullies” Greenpeace had taken on in the past. 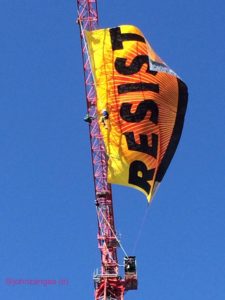 Activist Nancy Pili Hernandez, who helped unfurl the banner from 270 feet up, broadcast separately on Facebook Live about the banner itself. “This is a hand-painted love letter to you, a message to the people,” she said. “We have to push back if this system is broken. It’s our responsibility to fix it,” she said.

All seven Greenpeace activists remained on the crane until about 10 pm, 19 hours after the action started. Dozens of police were waiting for them below, but it was not clear what charges they would face.

Wednesday morning’s banner drop follows days of sustained protests against Trump. Four activists disrupted Rex Tillerson’s confirmation hearing with “Reject Rex” signs earlier this month; at least a thousand people protested at the White House after Trump signed an executive order to fast track the Keystone XL northern leg and the Dakota Access Pipeline; and hundreds of thousands of people participated in Women’s Marches across the country over the weekend.

“Resist in every way you can, and that looks like a lot of different things,” said Schwartz. “From protesting in the street, to defending and protecting vulnerable communities, to having those conversations that correct people’s racism, homophobia, and rejection of diversity,” he said. 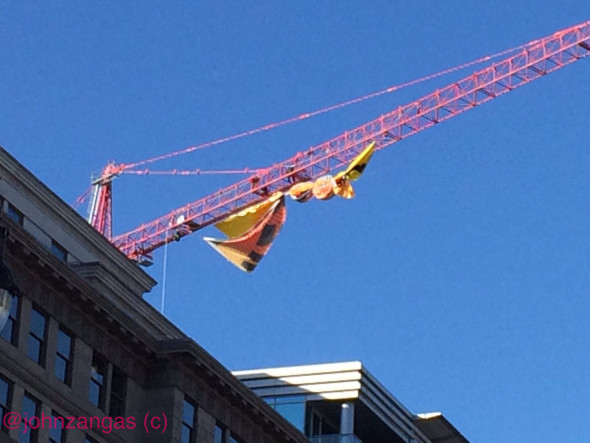 In the late afternoon, the banner was rolled up, but the climbers remained on the crane arm for several more hours./Photo by John Zangas