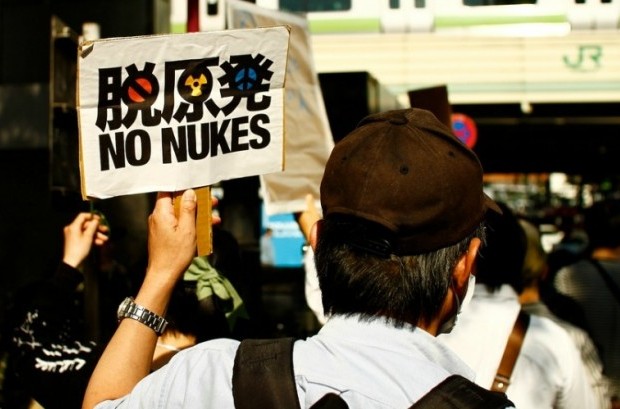 Above Photo: Waterways in the Fukushima district have hundreds of times more radiation now than before 2011, Greenpeace reports. (Photo:Matthias Lambrecht/flickr/cc)

Concerns are ‘both ongoing and future threats, principally the continued releases from the Fukushima No. 1 plant itself and translocation of land-based contamination’

Greenpeace Japan reported Thursday that waterways in the Fukushima district have hundreds of times more radiation now than before 2011, when the nuclear disaster that forced the evacuation of at least 160,000 people occurred.

Looking back at the past five years, the environmental group’s new report, Atomic Depths: An assessment of freshwater and marine sediment  contamination: The Fukushima Daiichi nuclear disaster—Five years later (pdf), finds that the hazardous chemical cesium-137 was present in the soil on the banks of the Abukuma, Niida, and Ota rivers.

“The extremely high levels of radioactivity we found along the river systems highlights the enormity and longevity of both the environmental contamination and the public health risks resulting from the Fukushima disaster,” said Ai Kashiwagi, energy campaigner at Greenpeace Japan. “These river samples were taken in areas where the Abe government is stating it is safe for people to live. But the results show there is no return to normal after this nuclear catastrophe.”

Fukushima prefecture and neighboring prefectures have a number of major and minor river systems that flow from contaminated upland forests to coastal plains, and ultimately empty into the Pacific Ocean. These river systems, in particular the Abukuma, Naruse, Nanakita, Natori, Kuji, and Naka, as  well other smaller river systems including the Mano, Nitta, Ota, and Ukedo, have catchments of thousands of square kilometers.

“The radiological impacts of the Fukushima nuclear disaster on the marine environment, with consequences for both human and nonhuman health, are not only the first years. They are both ongoing and future threats, principally the continued releases from the Fukushima No. 1 plant itself and translocation of land-based contamination throughout Fukushima Prefecture, including upland forests, rivers, lakes and coastal estuaries,” the report continues.
“The results show there is no return to normal after this nuclear catastrophe.”
—Greenpeace Japan

Lake Biwa is a particularly contentious site, as it provides drinking water for about 14 million people in the Kansai region, the Japan Times reports.

Kansai Electric Power Co. wants to restart nuclear reactors in the nearby Fukui Prefecture, while residents in the area have been fighting to keep them shut down, the Times says.

The lifting of evacuation orders in March 2017 for areas that remain highly contaminated is a looming human rights crisis and cannot be permitted to stand. The vast expanses of contaminated forests and freshwater systems will remain a perennial source of radioactivity for the foreseeable future, as these ecosystems cannot simply be decontaminated.

“The radiation levels in the sediment off the coast of Fukushima are low compared to land contamination, which is what we expected and consistent with other research,” said Kendra Ulrich, senior global energy campaigner at Greenpeace Japan. “The sheer size of the Pacific Ocean combined with powerful complex currents means the largest single release of radioactivity into the marine environment has led to the widespread dispersal of contamination.”

The report comes as the “much-hyped ice wall,” an underground refrigeration system created to build a barrier to contaminated groundwater, is said to have “failed to stop groundwater from flowing in and mixing with highly radioactive water inside the wrecked reactor buildings.”

“The scientific community must receive all necessary support to continue their research into the impacts of this disaster,” said Ulrich. “In addition to the ongoing contamination from forests and rivers, the vast amount of radioactivity onsite at the destroyed nuclear plant remains one of the greatest nuclear threats to Fukushima coastal communities and the Pacific Ocean.”

“The hundreds of thousands of tonnes of highly contaminated water, the apparent failure of the ice wall to reduce groundwater contamination, and the unprecedented challenge of three molten reactor cores all add up to a nuclear crisis that is far from over,” she said.