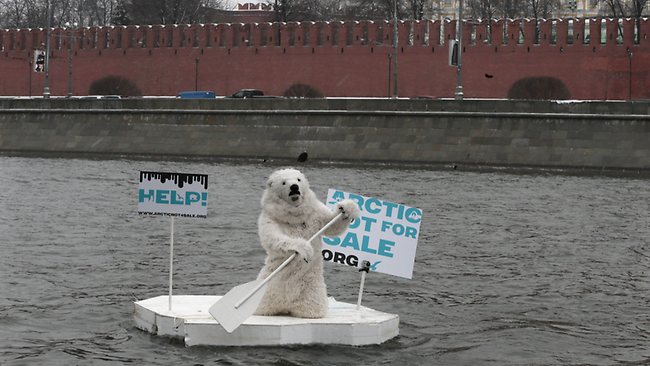 A Greenpeace activist dressed as a polar bear sits on a wooden block of ice on the Moskva River protesting against plans of oil companies’ drilling in the Arctic, with the Kremlin wall in the background. Picture: AP

A GREENPEACE activist in a polar bear suit has floated along the Moscow River past the Kremlin before being briefly detained in a stunt by the environmental group to protest against energy exploration in Russia’s Arctic waters.

The activist in a furry white suit stood on a white air cushion designed to look like an ice floe with signs reading “Help!” and “Arctic not for Sale” before a river patrol came out in a motorboat and bundled the activist inside.

The activist was later released from a police station with no charge, Greenpeace said on Twitter, adding that “the crimes are being committed in the Arctic.”

Greenpeace said in a statement on its website it was starting to collect signatures for a petition calling on Norwegian Prime Minister Jens Stoltenberg to halt the project, warning of the risk of oil spills.

It accused Statoil of being ready to take on environmentally risky projects in Russia that it would not consider doing in its home country.

ast year picketed the headquarters of state-owned energy giant Gazprom. They were charged with breaking rules on protests and fined.

Russia’s Arctic is seen as one of the world’s last remaining natural wildernesses, but the Russian authorities are increasing looking to exploit its energy reserves as deposits elsewhere run out.

“If there was a disaster in the Barents Sea, the damage to the northern environment and also fish resources and population of littoral towns would be catastrophic,” Greenpeace warned.