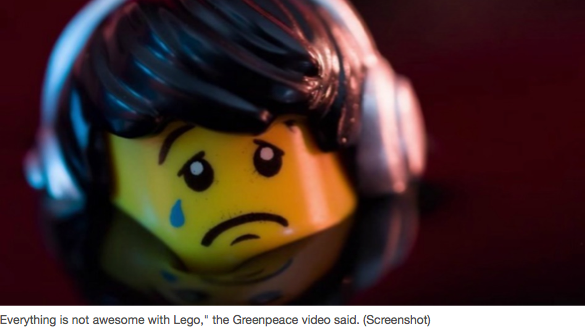 Warner Bros. apparently objects to use of toy characters who save arctic, but not those who destroy it

According to The Wrap:

After initially having Greenpeace’s super viral “Lego Movie” parody pulled from YouTube, Warner Bros. has withdrawn its complaint and the clip has been put back up on the video site.

The video, which drowns characters from WB’s mega-hit film in oil, was made as a protest against the toy company’s $116 million sponsorship deal with Shell Oil. It had reached over 3 million views on YouTube in just a couple of days, before it was taken down late Thursday.

UPDATE (1:02 PM EST): Statement sent by Greenpeace to its member regarding the banned video:

It looks like LEGO and its corporate pals are more offended by a video than by the idea of Shell’s plan to drill for Arctic oil. Despite the real risk of a terrible and unstoppable oil spill in icy, pristine waters, Shell is determined to  plunder every last drop of oil it can.

Just like it’s not OK for a tobacco company to market to children, an oil company has no place promoting its brand on kids’ toys. So that’s why we’re asking LEGO to show the world – and our children – that an ethical company won’t work with Shell.

LEGO said last week that it’s “determined to leave a positive impact on society and the planet”.  So are we! That’s why we’re working together to protect our oceans, rainforests and the Arctic.

Earlier: The Warner Bros. corporation, the film production company behind the “The Lego Movie” based on the famous toy brand, has forced YouTube to remove an online video created by environmental campaigners at Greenpeace designed to expose the troublesome relationship between the company that makes the popular building blocks and a dangerous push for Arctic drilling by Shell oil.

Greenpeace had taken issue with Lego’s ‘offshore drilling’ themed toy set, created in conjunction with Shell and featuring its logo, and last month—as part of a larger campaign to ‘Save the Arctic‘ from offshore oil and gas drilling—initiated an effort designed to expose and end the relationship.

As part of the campaign, Greenpeace created an animated online video which used the Shell-themed Lego pieces as a set to show a devastating offshore oil spill in the Arctic. According to the group, “The film depicts an Arctic made entirely of LEGO, and imagines an oil spill in this beautiful and pristine part of the world. In real life, big oil company Shell plan to drill in the Arctic, with the very real risk of a huge oil spill that would destroy this unique ecosystem.”

After receiving nearly 3 millions hits in less than a week, however, the video was pulled from YouTube sometime on Thursday. According to Greenpeace, it was Warner Bros. specifically that pushed for its removal.

And the note on YouTube page where the video was states: “This video is no longer available due to a copyright claim by Warner Bros. Entertainment.”

“The video was removed last night, just before reaching three million hits. We don’t know why they complained,” Birgitte Lesanner, the campaign manager at Greenpeace Denmark, told the newspaper Politiken.

“It’s strange, for satire is generally widely accepted on YouTube. We guess the video just got too popular.”