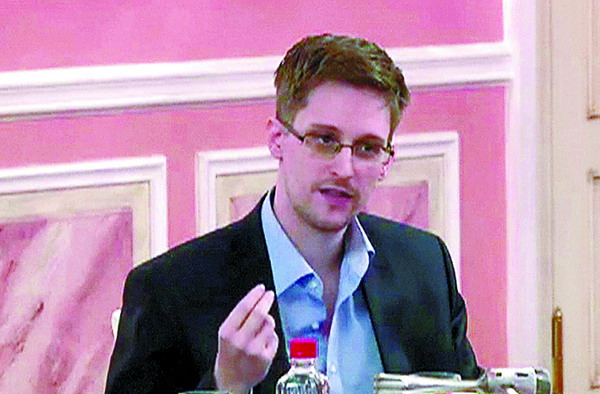 Greenwald on Snowden Leaks: The Worst Is Yet To Come

Above photo: Edward Snowden speaks during a dinner with U.S. ex-intelligence workers and activists in Moscow on October 9, 2013.

Although four months have passed since Edward Snowden’s explosive NSA surveillance leaks, the most revealing details have not yet been published, and could be rolled out in the international media over the coming weeks and months, beginning with U.S. spying activities involving Spain and France. That’s according to Glenn Greenwald, the Guardian journalist who broke the Snowden story last June, and whose life has been drastically upturned since. “There are a lot more stories,” he said on Monday in Rio de Janeiro, where he lives. “The archives are so complex and so deep and so shocking, that I think the most shocking and significant stories are the ones we are still working on, and have yet to publish.”

Greenwald was speaking in a packed university gymnasium to hundreds of journalists, who are gathered here this week for the Global Investigative Journalism Conference, a two-yearly event that rotates around the world, bringing together writers, television producers and editors to share information and collaborate on work. Here, Greenwald was something of a hero — the entire thrust of the conference centers on ferreting out secrets and wrongdoing—and the journalist received a rock-star welcome. And while Rio was chosen as the location for the conference years ago, it proved a fortuitous spot. Greenwald recently revealed on Brazil´s hugely popular Globo TV that the NSA had spied on President Dilma Rousseff, as well as the government oil company Petrobras. The news caused a furor in Brazil, not least from Rousseff herself, and she canceled a White House visit, originally scheduled for next week.

But in an hour-long discussion on stage with a Dutch journalist, Greenwald suggested that his life was now immensely complicated. A New York lawyer before turning into a high-profile blogger in 2005, he revealed that he was in daily contact with Snowden—a fact that came as a surprise to most in the audience—in what is an active collaboration to sift through the mountain of documents Snowden carried out of the U.S. Snowden contacted Greenwald and U.S. filmmaker Laura Poitras after taking the information to Hong Kong.

Snowden, who had top-level U.S. security clearance, spent a month in Moscow Airport’s transit area until Russia granted him asylum; the U.S. has indicted him for stealing state secrets and exposing them, charges which would likely land him in jail for the rest of his life.

In addition to his contact with Snowden, Greenwald said he was in daily communication too with Poitras, who is based in Berlin, continuing to dig into what Greenwald says is “thousands and thousands of documents.” The challenge of sifting through the information is now itself a risky endeavor. “We go to extreme lengths to make sure our communication is protected,” he said.

The work has made Greenwald himself a possible target of investigation, and he intimated that returning home to the U.S. would not be simple. British police detained his partner David Miranda at Heathrow airport in August, seizing computer hard drives, as Miranda was switching planes from Berlin, where he’d met Poitras. “We spent yesterday cloistered with British lawyers in a conference room, for the lawsuit against British authorities for detaining him for what amounted to 11 hours,” Greenwald said.

But the truly drastic impact has been on Snowden’s life, of course. And in a long discussion, Greenwald outlined how Snowden’s options for asylum had quickly shrunk after he left Hawaii in early June. Snowden flew initially to Hong Kong, where he made contact with Poitras and Greenwald. The two flew to that city, a Chinese special administrative region governed mostly by its own laws, to meet him.

Greenwald said he and Poitras locked Snowden in a room in Hong Kong for six hours after they arrived to meet him in order to “relentlessly interrogate him,” and to make sure that they were not being set up, or that the documents were not fake. Greenwald said the two were also anxious to ensure that Snowden, just 29 at the time, grasped the permanent impact on his future of exposing state secrets—and of insisting to the journalists that they publish his name. “We spent the bulk of that first week making sure he really understood what the implications were of revealing himself,” Greenwald said.

When it become clear that Hong Kong would not grant Snowden protection from U.S. authorities, he tried to reach Ecuador through Moscow and Cuba, but was stuck after the U.S. canceled his passport. Still, Greenwald said governments who had considered taking in Snowden had made no real effort to do so. “Venezuela could send a jet to Moscow any time to pick him up, but never did. Ecuador the same way,” he said.

So, is Snowden happy in exile in Russia, whose government has itself conducted widespread surveillance programs and routinely cracks down on subversive journalists? Greenwald replied: “Happy, in the sense that if the alternative is a cage in the U.S. for the rest of your life, then Russia looks a lot better.”