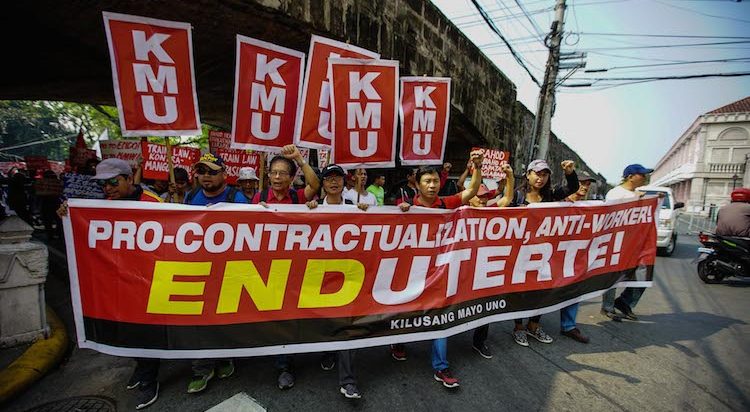 Earlier this year, Philippine President Rodrigo Duterte signed the Anti-Terrorism Act—a law that Amnesty International has called “yet another setback for human rights.” The law is clearly aimed at expanding the government’s ability to target political opponents and activists. It allows suspects to be detained by the police or military without charges for as long as 24 days and placed under surveillance for up to 90 days.

“CWA is proud to support the introduction of the Philippine Human Rights Act to protect the working people in the Philippines who are suffering greatly under the Duterte regime,” said CWA’s Senior Director for Government Affairs and Policy Shane Larson. “Although we’re all dealing with the fallout of the pandemic right now, we cannot turn our backs on the crisis that Filipino workers have been facing under Duterte, which has greatly accelerated during COVID-19, with the Philippines government’s intensified power grab to persecute its political enemies. We must show Duterte that Americans and the labor movement won’t stand for him and his administration imprisoning and executing trade unionists and activists.”

“The Anti-Terror Law is the latest addition to Duterte’s arsenal in his war against human rights defenders and activists and will only worsen the widespread killings under Duterte,” said Ramon Mappala, a former political prisoner and current member of the Malaya Movement. “The introduction of the Philippine Human Rights Act is a significant development for the Filipino-American community in the United States and Filipinos in the Philippines; this is a sign of hope for Duterte’s victims and a strong warning to Duterte’s regime. Despite the threats of the Duterte Administration, we will not be deterred until we see justice in the Philippines.”

The Philippine Human Rights Act blocks U.S. funds for police or military assistance to the Philippines, including equipment and training, until such time as human rights conditions are met. Specifically, the Philippines must meet the following conditions to lift restrictions set by the bill:

For more information about the PHRA or to endorse, visit www.humanrightsph.org.