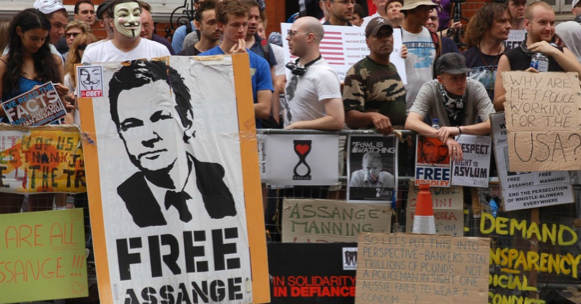 Supporters of Wikileaks founder Julian Assange rally outside the Ecuador Embassy in London in August of 2012. (Credit: flickr / cc / Vertigogen)

Nearly sixty international human rights groups, press freedom advocates and civil society organizations have submitted reports to bodies at the United Nations calling on Swedish officials to remedy the “pre-trial detention” status of Wikileaks founder Julian Assange who has remained under asylum protection at the Ecuadorian Embassy in London for almost two years.

According to the groups, Assange’s legal treatment by the Swedish government—concerning charges of alleged sexual misconduct that took place in 2010—are in direct violation of his human rights and stems directly from his work as a publisher of leaked government material, most notably diplomatic cables and documents related to the US wars in Iraq and Afghanistan.

Two Swedish organizations, as well as jurist organizations from around the world—including the American Association of Jurists (AAJ), the National Lawyer’s Guild (NLG), the International Association of Democratic Lawyers (IADL), and the Indian Association of Lawyers—submitted two reports, one in English and one in Spanish, each highlighting various attacks on Assange’s right to due process and legal protections.

According to the English report, signed by 16 organizations and sent to the UN’s Universal Periodic Review, “The methods employed by the prosecutor in Mr. Assange’s case are a clear violation of his fundamental human rights, yet they remain beyond the reach of judicial review.”

A third report, signed by 33 human rights groups, media and civil society organisations, and unions from around the world petitioned the Human Rights Commission in Geneva to intervene on Assange’s behalf and called him a ’political prisoner’ under threat.

“The entire international community has witnessed the opportunistic manipulation of the accusations against Mr. Assange, in an attempt to destroy his reputation and to prevent his freedom and his ability to act politically,” reads the report submitted to the UNHRC. “It is obvious that this unprecedented situation has not come about as a result of the alleged acts committed in Sweden, but rather due to the clear political interference by powerful interests in response to Mr. Assange’s journalistic and political activities. This situation has turned Julian Assange into a political prisoner, who is effectively condemned to house arrest without any charges having been brought against him, without being able to exercise his right to due process.”

Assange sought refuge in Ecuador’s embassy in 2012 and was granted asylum status for “political persecution” over fears that if he followed court orders to return to Sweden he would then be extradicted to the United States under the power of a sealed US Federal Grand Jury indictment.  White House officials have called Assange a criminal and “enemy of the state” for his work as a journalist and bringing numerous leaked government documents into the public forum, including those that exposed war crimes in Iraq and Afghanistan.

According to a press statement put out by Wikileaks:

On 19 June 2014, Julian Assange will have spent two years inside the Embassy of Ecuador in London (and a total of nearly four years in the UK under different forms of restrictions to his freedom of movement). He has been granted political asylum in relation to US attempts to prosecute him as the publisher of WikiLeaks. Sweden has refused to give assurances that Julian Assange will not be extradited to the United States. A Swedish prosecutor has kept a preliminary investigation open for nearly four years, but has not charged Julian Assange with any crime. The prosecutor refuses to question him in London, leading to a stalemate. At least four formal offers have been made to the prosecution to interview Mr. Assange in person, in writing, via telephone, or via video-link. All offers have been declined. The stalemate has cost over $10 million in the UK alone, where a costly police detail watches the Embassy and all of Mr. Assange’s visitors around the clock.