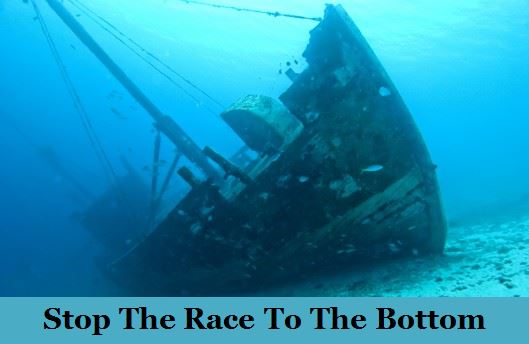 Tomorrow, October 29 2014, the World Bank will release its 2015 Doing Business report and ranking of some 189 countries, including our nation. The report helps business push countries in a race to the bottom with laws that do not protest workers, the environment, consumers or control the abuses of transnational corporation. Popular Resistance sees these rankings as a great disservice to the world that empowers corporations and weakens governments and the people.

Since 2002, through this annual publication, the World Bank has been benchmarking and ranking countries according to “the ease of doing business.” The Doing Business is based on the principles of privatization, deregulation, low taxation for corporations, and ‘free market’ fundamentalism. It rewards the lowering of social and environmental safeguards, therefore allowing the exploitation of natural resources and human capital by foreign corporations and local elites.

This flagship project of the World Bank is used for other benchmarking projects, such as the 2013 Benchmarking the Business of Agriculture (BBA) developed at the G8’s urging to “develop options for generating a Doing Business in Agriculture index.” The Doing Business and the BBA establish the economic and regulatory environment to favor big agribusinesses and allow large-scale land investments in agriculture, at the expense of smallholder farmers who produce 80% of the food for the developing countries.

With the Bank setting standards for investors and bilateral donors around the world, driving significant money flows towards the countries ranked highest in the Doing Business report, governments refrain from challenging the methodology based on creating race to the bottom. Instead, the governments are forced to set as their policy goal an improvement in their next Doing Business ranking. They turn to the World Bank advisory services to be guided on implementation of regulations that will improve their score. This undermines countries’ sovereignty and necessary public debate on economic and development policies as made evident by the multi-continental campaign Our Land Our Business.

There are no winners in the race to the bottom created by the Doing Business rankings, which are today’s version of the Structural Adjustment Programs that devastated livelihoods of millions of people through the withdrawal of state intervention and the forced liberalization of national economies in the 1980s and 1990s.

The 12th Doing Business report is about to be released, despite widespread opposition, including from within the Bank. Organizations are calling on the Government of [name of country] to reject the ranking and formally challenge the World Bank’s rating of our country, an activity for which the Bank has no mandate and legitimacy.