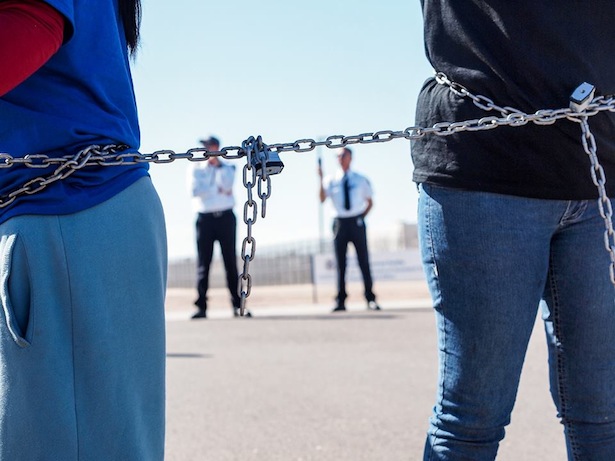 Monday morning I woke at dawn and drove an hour from Phoenix to the small town of Eloy, Arizona. It was pretty warm already and I knew the Arizona sun would only grow hotter. I grabbed my bandana and prepared to chain myself to the entrance of one of the largest detention centers with the worst reputation in the United States. There were six of us in all — two men and four women. One was 16-year-old girl named Sandy Estrada. Her brother was detained inside.“I am doing this so he and everybody else in there knows that we support them,” she said. “Obama has the power to keep families like mine together. He hasn’t done a thing.”

Eloy has enough beds for 1,600 people and has already had two men commit suicide inside this year. The prison was responsible for the placing of six of the Dream 9 — student activist who attempted reentry into the United States as protest July — insolitary confinement. The prison is run by Corrections Corporation of America, whose reported revenue has doubled throughout the 2000s as the federal government has contracted it to hold an increasing number of undocumented immigrants.

Another one of our group was a father of two children. As hours passed, he chanted “undocumented and unafraid!” and “nos tienen miedo porque no tenemos miedo,”which means, “they are scared of us because we aren’t scared.” Our bodies were locked together tightly, and if one of us moved too quickly we would all feel the pain of the heavy chains. The cops push us aggressively from time to time, but they said that with all the cameras around they wouldn’t dare arrest us. We remained wrapped in chains under the Arizona sun until we learned that Eloy Detention Center had shut down for the day. We returned to Phoenix after promising the guards we would be back until Eloy was closed forever.

My journey to Eloy began four days earlier when I made my way to Arizona from Utah upon hearing very publicly about the shutdown of an immigration detention center. What intrigued me was the fact that there was absolutely nothing secretive or hidden about the upcoming action. People advertised the shut down in posters on Facebook and videos on YouTube. They put it out everywhere.

I had to get to Arizona in order to find out what kind of organizers would dare to be so transparent about direct action.

The planned events were part of the #not1more campaign pressuring President Obama to take administrative relief and put a stop to the deportations. Obama, who has been called Deporter in Chief by various migrant rights organizations, has deported nearly 2 million people during his time in office. With immigration reform stalled and no sign the deportation rate would slow down, #not1more decided to put together a conference for people around the country to share information and ideas on how to stop deportations themselves.

I was confused when I arrived at the immigration center in Phoenix and saw tons of children running around and grandparents lounging in the shade. When La Migra is mentioned in migrant communities, what comes to mind isn’t children playing and relaxation, and the atmosphere was jarring given the location. The center is where immigrants are brought and processed after a raid and are then transferred by bus to nearby for-profit detention prisons like Eloy.

The sunbathing grandparents didn’t match my conception of who normally orchestrates direct actions. Was this really the group that had declared it was going to “shut down ICE”?

The two-day conference featured breakout groups on topics such as cop watch and fighting deportations. All the discussions included an overwhelming number of parents and grandparents. During the last day of the conference Amelia Castianos stood up during a break out group and explained, “Immigration reform occurs each time we challenge the unjust laws. Immigration reform occurs each time we do an action.”

At one o’clock on Monday, 500 people gathered and marched to the ICE office. An impromptu fiesta broke out with flores de papel and music. It felt like a neighborhood block party. Anticipating the publicly advertised shutdown, the office had already shuttered for the day. In celebration, we hung a big banner in front of the offices declaring: “SORRY, WE ARE CLOSED BY THE PEOPLE.” Parents and children began to dance in a conga line. People placed colorful posters around the fence as police squads watched.

Across the country, protest and unity has been growing among immigrants and allies, making it harder for the politicians in Washington to ignore the issue. A week ago, 12 activists locked themselves to the wheels of an immigration bus, stopping operation streamline deportations for a day. One week before that, an estimated 100,000 people marched in every major city in the United States.

“Every day we are standing up to fight, organize and mobilize our people,” Castianos said. “The people in detention centers know they are not alone. They know that there are people outside that love them and are fighting for them.”

I didn’t bring any personal identification for the Eloy action because I knew that the other five were undocumented and didn’t have U.S.-issued IDs. While I was born in the United States, my indigenous parents migrated to Utah from Bolivia when my older siblings were young children. I was taught to assimilate and to never speak Spanish. God forbid I have any brown friends. I was told to try my best to be white. (I don’t begrudge my parents this upbringing. After realizing how hard it would be for them to move up in U.S. society, they wanted at least someone in the family to have a chance at their American Dream.) Fortunately, no matter how hard I was pressured to blend in with the overwhelmingly Caucasian state, the color of my skin made me find comfort in others that looked like me. Befriending other children of immigrations, who also had parents that worked multiple jobs and got paid very little, became my connection to my family’s past. I resolved to stand in solidarity with them — in any way possible.

Before traveling to Arizona, I had been organizing for migrant rights for years. But the Arizona trip felt more invigorating, more reenergizing than usual actions and protests. I struggled to identify why until finally, it hit me.

Those days weren’t about theory; they were about everyday life. From the Phoenix processing center to the Eloy prison, people weren’t challenging the legitimacy of the border based on a theoretical analysis or political ideology. Instead, these actions are what these communities simply call survival.

“Undocumented people can get picked up by border patrol in Tuscan just by asking for work on the corner,” said Tania Unzueta from National Day Labor Organizing Network. “So a lot of people view it as, ‘If I am going to get picked up by police [anyway], this is on my own terms and part of a larger movement struggle.’”

Throughout my time in Arizona, I could feel that the resistance is alive — alive in the hearts of the frontline communities. It is alive when a Dominican grandfather tells me that direct action is the “only way to continue la lucha.” It is alive in the building of communities through dinners and parties. It is alive each time we dance bachata ycumbia on ICE property. It is alive each time we speak our languages. The resistance is so alive that the more people try and stifle the voices the stronger the voice gets. It is alive every time we don’t wait for Washington and instead do the work ourselves. As we continue to move forward with the campaign, the motto has become, “Until the President stops deportations, we will continue to stop them ourselves.”

This story was made possible by members of Waging Nonviolence. Become one today.