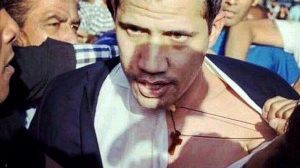 Guaido Is Back In Venezuela, Now What?

Above Photo: Guiado gets an unceremonious reception on his return to Caracas

Opposition leader Juan Guaido is back in Venezuela after a three-week international tour that took him to Colombia, Europe and the United States. His return was without force and without any conclusive announcements. What’s next now that he is back? What are the plans of the U.S. power?

“We just need a little bit,” Juan Guaido said to a small crowd in the Bolivar square at Chacao municipality, after his return yesterday in the late afternoon. He came back from the tour that took him through Colombia, the United Kingdom, Brussels, the World Economic Forum in Switzerland, Paris, Madrid, Canada, and the U.S.

Once again the image he can’t hide appeared; just a few people mobilized to great him. The same thing happened at Maiquetía International Airport when he arrived two hours earlier. What seemed to be a triumphant return was an entry into the country with a small welcome from deputies and opposition supporters.

The contrast with that image was given by followers of Chavismo who mobilized to express their rejection of Guaidó’s return to the country. Among those who shouted “out” and “traitor” were the workers of the state airline Conviasa, which was sanctioned by the U.S. government during the self-proclaimed president’s tour.

“Conviasa is one of the State companies that has grown, it is giving economic results, we are giving dividends to the State, it’s being self-sufficient… We are 2112 employees who have been affected by these unfair and illegal sanctions,” a Conviasa worker mobilizing against Guaido’s presence at the airport told Sputnik.

The distance between the Guaido manufactured abroad and the Guaido inside Venezuela was then as it was expected, both he and the opposition sectors that are part of this coup strategy have not achieved large mobilizations for almost a year. His return was no exception.

Juan Guaido’s international tour was not announced in advance. The self-proclaimed president appeared on January 19 in Colombia amidst one of his greatest political crises when just days before he had lost the presidency of the National Assembly on January 5 at the hands of sectors of the opposition that decided to move away from the coup strategy Guaido leads

In Colombia, Guaido was received by President Ivan Duque and then by U.S. Secretary of State Mike Pompeo. It was the kick-off of what was an engineering project supported on springs of U.S. power to photograph him with presidents and leaders of several countries, and thus re legitimize him at the international level.

The highlight of the tour happened in Washington, where, in a rare moment of unity, he was welcomed and applauded by Republicans and Democrats in Donald Trump’s State of the Union address to Congress, and then in his meeting at the White House with the president.

These were three weeks in which the illusion of a parallel government in Venezuela was created. The story ended the moment Guaidó set foot in Maiquetía International Airport and met a small group of people mobilized to receive him, and a larger group who expressed their rejection of him.

“There are things we have to say at its proper time… The pressure mechanisms are only going to increase, however controversial they may be,” he said in Chacao in a speech that was out concrete plans about his next steps.

Even without giving details, part of the “pressure mechanisms” will probably be new attacks on the economy. This has been the constant strategy of the U.S. against Venezuela, a policy that in its first steps was not declared and from 2017 was made explicit until the theft, for example, of the CITGO refinery on US territory.

However, it’s also clear that the policy of unilateral attack generates damage to the economy and society as a whole, but does not resolve their central objective: overthrowing Nicolas Maduro.

If the Trump Administration, the bipartisan agreement that recognizes Guaido, the U.S. hidden threads of power, want to achieve that coup d’état, then they need to undertake new mechanisms. What are they? This question does not have an answer yet and will surely be answered in the coming weeks.

This short time for action responds to two central aspects. First, what Guaido capitalized on in his international tour can quickly evaporate if he does not launch a plan of action or if  he comes up with convincing events that do not occur. His epic posturing of international triumph is running out of time.

Second, because the Maduro Administration, the Chavismo, and a growing sector of the Venezuelan opposition, have a road map that advances as the weeks go by and it has three central steps: modifying the current National Electoral Council, calling for legislative elections, and carrying them out this year 2020.

They count on international support for it, as it was evidenced in the visit of Russia’s Foreign Minister Serguei Lavrov to Caracas while Guaido was in the U.S.

The international support received by Guaido not only contrasts with his inability to achieve strong support in Venezuela but also contrasts with the position of the block opposing Chavism, which has been divided into two different blocs.

The formation of two oppositions had three founding moments. The first was to participate in the presidential elections of May 20, 2018, when the U.S. order was to abstain, seeking to disregard the result and form, as they did, a parallel government. The second was with the formation of the National Dialog Table in September 2019, and the third took place with the breakdown around the National Assembly on January 5 of this year.

This left, on the one hand, a sector aligned, financed and led by the United States, with Guaido as its visible face and another sector, in dialogue with the government, working on an agreement for the legislative elections, opposed to a coup d’état and unilateral sanctions.

The urgency of the Guaido strategy lies, among other things, in the fact that the number of opposition actors far from Washington is growing as the coup plan does not yield results.

This trend could increase in the coming weeks, particularly when the election dates are set and the dilemma appears in concrete to present the opposition with the possibility to win spaces in the legislative power or to abstain and be tied to the coup plan that has not given concrete results about when will they achieve political power.

This temporality of the conflict indicates that, surely, there will be action soon. And just as it is pristine that the “government of interim President Guaido” was always a creation of the U.S. with no real existence inside Venezuela, it is also true that the next decisions to try to overthrow the Maduro government go exclusively through what is decided and achieved from the United States.