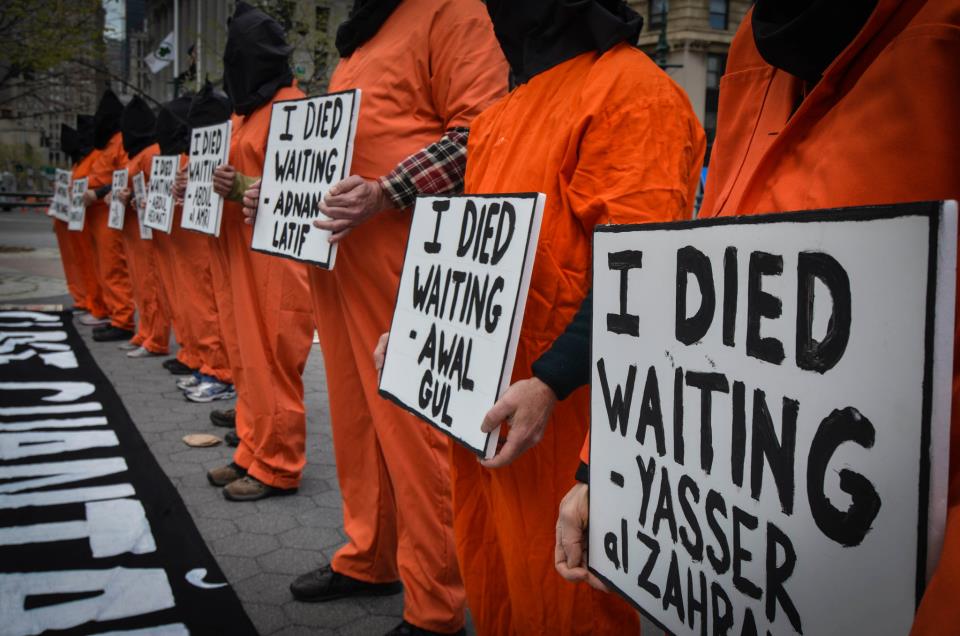 Day 203 of the Guantanamo Hunger Strike: Update and Upcoming Actions

“Look at the current situation, where we are force-feeding detainees who are being held on a hunger strike…Is this who we are?  Is that something our Founders foresaw?  Is that the America we want to leave our children?”  -President Obama on May 23, 2013

Over 90 days have passed since President Obama’s second promise to close Guantanamo. Thirty-six men remain on Hunger Strike in Guantanamo, with thirty-two being force fed twice a day.  Sadly, this is who we are.

But it is within our collective power to stop it.

Our Rolling Fast continues in solidarity with these men – calling for Guantanamo to be closed.  WE NEED FOLKS TO SIGN UP FOR SEPTEMBER.  See below for information on how to participate.

Also, from September 4-6, Witness Against Torture & CloseGitmo.net invite you to three events in Washington, DC. Please join us on Sept. 6 in front of the White House, as our friend and colleague Andrés Thomas Conteris – on Day 61 of his own water-only fast, undergoes a simulated force feeding.  More information below on all of the Sept 4-6 events.

We will close with a note recently received from Moath al-Alwi – imprisoned in Guantanamo and a participant in the Hunger Strike:

“We thank all of those who stand in solidarity with our hunger strike, those who support us, inside and outside America.”

A weekly vigil at the White House has been focusing on the Guantanamo Hunger Strike since February, 2013.  On Sept. 6,  after fasting on water-only for 61 days in solidarity with hunger striking prisoners in Guantanamo and California Prisons, Andrés Thomas Conteris will be fed with nasogastric tubes to show how prisoners are force-fed twice daily in Guantánamo.

Forced-feeding has been classified as torture by human rights organizations and is denounced by the American Medical Association. This torture is perpetrated twice daily against Gitmo prisoners and is allowed to continue as long as it is kept in the shadows, hidden from public view. This feeding will not only be done to ensure Andrés can stay alive, but will reveal in the light of day how U.S. policy practices torture.

Diane Wilson, co-founder of CodePink and member of Veterans for Peace, fasted 57 days on water and then scaled the fence of the White House on June 26, 2013, International Day for Victims of Torture.

Diane’s jury trial will take place Thursday & Friday, September 5-6, at 9:30AM at the DC District Court. Please come support Diane at her jury trial which may extend into the following week. Wear orange clothing or jumpsuits and bring signs.

Where: District Court for the District of Columbia

CloseGitmo.net: Close Guantánamo & End U.S.-sponsored Torture came together as a group of organizations in solidarity with hunger strikers at the U.S. Navy Guantanamo Bay Detention Camp and those in prisons in California supporting the 5 Core Demands of prisoners at Pelican Bay. Key allies are Codepink, Witness Against Torture, Veterans for Peace, and Nonviolence International.

Join us for a social event with speakers, music & poetry at Busboys & Poets at 14 & V, NW in DC on Wednesday, September 4 7-9pm. We will distribute Orange Ribbons and encourage people to donate to the
campaign to encourage 2.7 million people to wear them. More info at OrangeRibbons.net

Give up food for a day as part of Witness Against Torture’s ROLLING FAST.  Over 200 people have participated by fasting for some period of time since the Guantanamo Hunger Strike began.  Sign up for one day, or more.  Sign up as a community or as an office!  Click on the link above or simply send an email to witnesstorture@gmail.com to sign up.  Download and send this letter to a man detained in Guantánamo.  The men on Hunger Strike know of, and very much appreciate our collective efforts at solidarity.

December 9-11, 2013: Witness Against Torture activists on Trial in Washington DC for arrests at the White House on Day 100 of the Hunger Strike

to rsvp, or for more information, email witnesstorture@gmail.com

Post any pictures of your local activities to http://www.flickr.com/groups/witnesstorture/, and we will help spread the word onhttp://witnesstorture.tumblr.com/

Witness Against Torture is completely volunteer driven and run.  We have no paid staff, but do have expenses associated with our organizing work.  If you are able, please donate here.