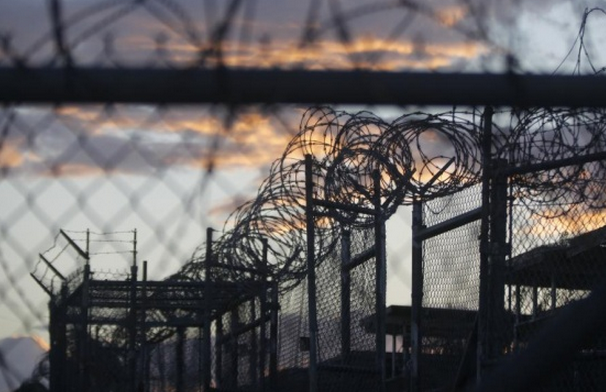 Guantánamo Prisoner On Nine-Year Hunger Strike Will Be Released

Abdul Rahman Shalabi, 39, was among the first prisoners taken to Guantánamo in January 2002. Photograph: Charles Dharapak/AP

A prisoner who has been on a nine-year hunger strike to protest against his confinement at the US base at Guantánamo Bay, Cuba, can now return to his native Saudi Arabia, a government review board said on Friday.

The Periodic Review Board, which has been re-evaluating dozens of Guantánamo prisoners previously deemed too dangerous to release, said in a statement published on its website that Abdul Rahman Shalabi can be released to take part in a Saudi government rehabilitation program for militants and would be subject to monitoring afterward.

Shalabi, 39, was among the first prisoners taken to Guantánamo in January 2002. He was never charged with a crime but the government said he had been a bodyguard for Osama bin Laden and had links to the external operations chief for al-Qaida, Khalid Sheikh Mohammed, who is facing trial by military commission at Guantánamo.

The board, which was created by the Obama administration in 2011 as part of the effort to close the prison at Guantánamo, did not clear Shalabi of wrongdoing and said it “acknowledges the detainee’s past terrorist-related activities”.

Shalabi began a hunger strike in 2005. He and another prisoner, who since has been released, maintained the protest longer than any others held at the base. Court records show Shalabi occasionally consumed food but also dropped to as little as 101lb. His lawyer told the review board in April that prison officials had fed him with a nasogastric tube daily for nine years.

The US now holds 116 men at Guantánamo, including 52 cleared for transfer or release.