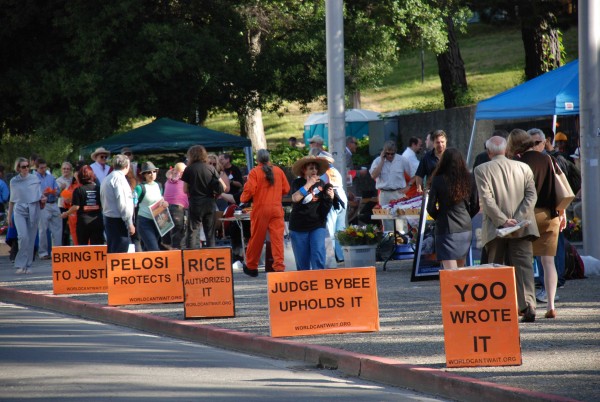 (Berkeley, UC campus) John Yoo, the UC Berkeley law professor who remains an unindicted war criminal for his legal work developing the Bush-Cheney administration’s torture program, has been again rewarded by the University of California.

Yoo has been appointed co-director of UC’s new KOREA LAW CENTER, a think tank headquartered at Boalt Law designed for joint legal and political research between the U.S. and Korea.  According to UC’s website, “The Korea Law Center launch comes on the heels of the U.S.—Korea Free Trade Agreement, which opens up the republic’s legal market to U.S. law firms. The agreement has accelerated interest in the East Asian state and marks an ideal time for Berkeley Law to expand its Korean programs.”

Advocating “No War Criminals On Campus!” and “Shut Down Guantanamo, End U.S. Torture,”  activists will demonstrate at the Korea Law Center’s Inaugural Conference, where John Yoo is among a day of speakers including high level Korean government officials and business representatives.  As the Guantanamo prison camp remains open into its 13th year – and Obama’s promises to shutter it remain unkept — 154 men remain imprisoned there.  Most of them have never been charged with a crime.  76 were cleared for release by the US government years ago, 56 of them Yemeni.

Since the prisoner’s hunger strike of over one year ago which thrust Guantanamo back into world headlines, approximately 40 men continue this strike.  Many are being subjected to daily forced feeding, widely condemned and seen as a form of torture in itself by human rights organizations, legal and medical associations, and members of the U.S. Congress. And the Senate report on CIA torture has still not been made public.“While victims of the illegal torture program built on his legal handiwork continue to suffer and die, John Yoo has no more legitimate place on the UC faculty than do any of the other Bush torture team members who have similarly found safe harbor from prosecution in academia and the corporate business world,” claimed Curt Wechsler, editor of FireJohnYoo.net.

The national organization The World Can’t Wait, the main sponsor of this demonstration,  has announced further protest plans on May 10 at Boalt Law’s commencement ceremony, and on May 23 in conjunction with the nationwide Global Day of Action to Close Guantánamo and End Indefinite Detention.