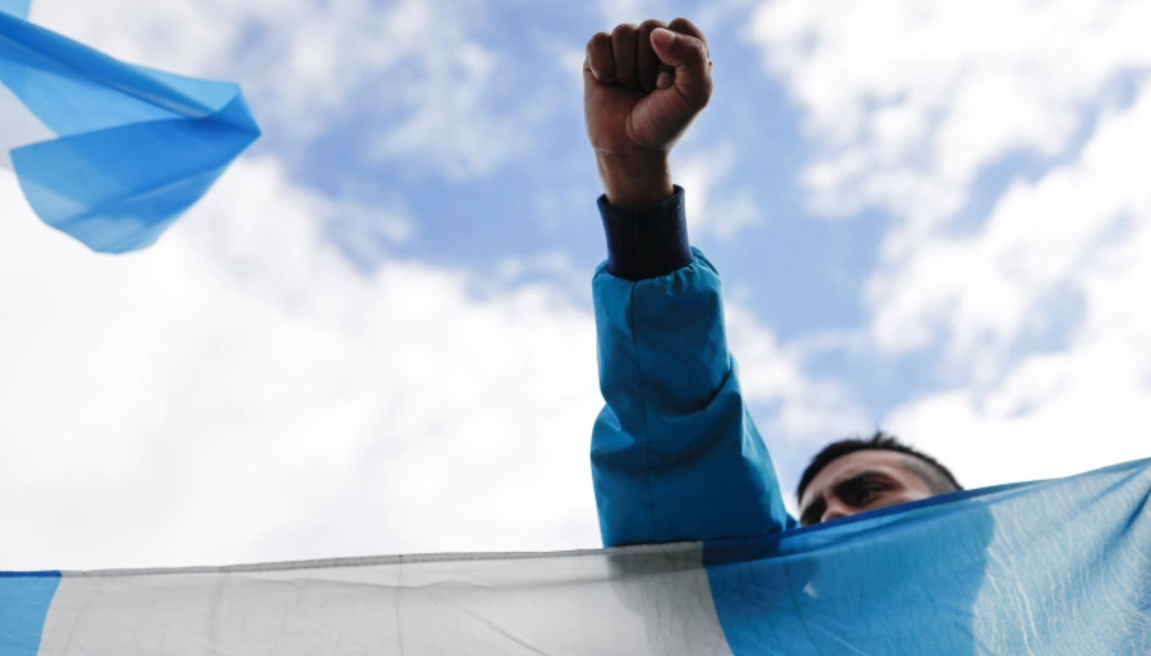 Above photo: A man raises his fist as he takes part in a protest to demand the resignation of President Alejandro Giammattei on November 22. Luis Echeverria/Reuters.

Guatemala’s Congress annulled a contentious budget this week, but protesters are still calling for the president and legislators to resign.

Guatemala City, Guatemala – Guatemalans have returned to protest across the country for the second Saturday in a row, as discontent with President Alejandro Giammattei and his government continues.

More than 2,000 people gathered in Guatemala City’s central plaza to demand the resignation of Giammattei and congressional representatives who had approved the country’s controversial 2021 budget.

“We are demanding that they respect our rights and that all those corrupt politicians in Congress leave,” Maria Fernanda Saldana, a 22-year-old university student, told Al Jazeera at the demonstration, where protesters chanted for Giammattei to step down.

“The only thing they have done is rob our money,” Saldana said. “We are fed up that they only take the money to benefit them and do not do anything for the people.”

Tensions boiled over last week after Congress approved a $12.8bn budget in the middle of the night that raised stipends for representatives’ meals while cutting funding for human rights agencies, healthcare, education, and the judiciary.

Thousands of people protested across Guatemala on November 21 and, in the capital, a march led by university students culminated in a few of the demonstrators setting part of the Congress building on fire.

In the face of such widespread anger, spurred by the budget, as well as the government’s mixed response to the COVID-19 pandemic and recent hurricanes that hit Guatemalan communities hard, Congress on Wednesday annulled the contentious budget.

But the protests, though smaller than last weekend, have continued.

“They have never passed legislation for the country,” Angela Guzman, a 50-year-old Guatemala City resident, said during Saturday’s rally.

“They have only benefitted from high salaries and from [corruption],” she said. “We are here to remove the president and his cabinet. They are not working for the people.”

Following the unrest on November 21, the Giammattei administration announced a dialogue that included think-tanks and the business community to find a resolution to the conflict about the budget.

“The president expresses his most absolute openness to an inclusive dialogue that will allow an understanding among all sectors of national life,” the Guatemalan government said in a statement, as reported by Reuters News Agency.

But as the dialogue began Tuesday, many groups including the Central American Institute for Fiscal Studies think-tank – known as ICEFI, according to its Spanish-language acronym – announced they were pulling out of the process.

“There were problems with the objective of what they wanted and what our objectives were,” Jonathan Menkos, ICEFI’s executive director, who was going to represent the group in the dialogue process, told Al Jazeera.

“The government has the right to talk with who they want,” Menkos said.

“But the need to establish the rules of the dialogue. We were told it was a technical discussion, but we found the morning of the dialogue that the others invited were not from think-tanks and that they did not have a technical analysis of the budget.”

He added, “They appeared to be organisations that were backing the government.”

The dialogue is moving ahead, however, and the Organization of the American States (OAS) sent a delegation to Guatemala on Friday to participate.

The Indigenous Municipality of Sololá has called for a massive mobilization of residents of the municipality to demand the resignation of Guatemalan President Alejandro Giammattei for this coming Monday https://t.co/65WK91Kcxh

The presence of OAS in the dialogue process was requested by the Guatemalan government, though Vice President Guillermo Castillo said on Twitter that he would not participate in meetings with the OAS.

On November 20, Castillo said he had called on Giammattei to join him in resigning for the good of the country.

After the Congress building was set alight, intense clashes erupted between riot police and protesters, and more than 30 demonstrators were arrested.

Police beat bystanders and a photographer, and two protesters each lost their left eyes after being struck by tear-gas canisters, local media reported.

Judge Mario Godoy ordered the release of protesters in the days following the unrest, citing the lack of evidence against them. Some of the protesters still face charges in relation to the protests, however.

“The actions of the police were absolutely arbitrary and illegal,” Iduvina Hernandez, coordinator of Security in Democracy, a rights group in Guatemala City, told Al Jazeera.

“Their manner in acting resulted in various crimes resulting in the bodily harm of protesters,” she said.

The Inter-American Human Rights Commission also condemned the authorities’ excessive use of force and called for an investigation. Giammattei has yet to comment on the police violence.

But that has not deterred the protesters who were back on the streets this Saturday.

“It was amazing to see the people united for the mission of removing the corrupt officials from Congress,” Saldana said. “We are the future of this country. What future do we have if the corrupt [officials] continue there?”