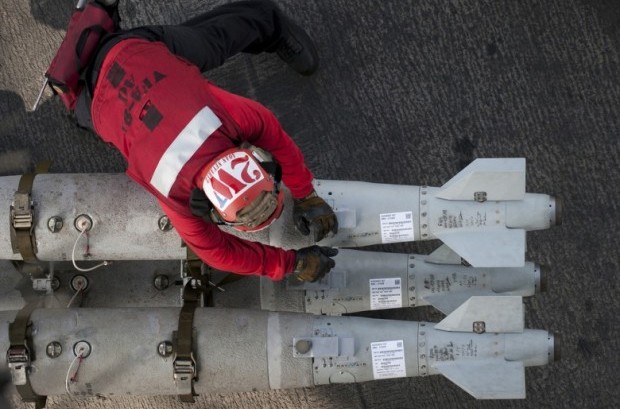 Guess How Many Bombs America Dropped In 2015

Above Photo: From NationalInterest.org.

United States – The primary focus—meaning the commitment of personnel, resources, and senior leaders’ attention—of U.S. counterterrorism policies is the capture or killing (though, overwhelmingly killing) of existing terrorists. Far less money and programmatic attention is dedicated to preventing the emergence of new terrorists. As an anecdotal example of this, I often ask U.S. government officials and mid-level staffers, “What are you doing to prevent a neutral person from becoming a terrorist?” They always claim that this is not their responsibility, and point toward other agencies, usually the Department of State (DOS) or Department of Homeland Security (DHS), where this is purportedly their obligation internationally or domestically, respectively. DOS and DHS officials then refer generally to “countering violent extremism” policies, while acknowledging that U.S. government efforts on this front have been wholly ineffective.

The primary method for killing suspected terrorists is with stand-off precision airstrikes. With regard to the self-declared Islamic State, U.S. officials have repeatedly stated that the pathway to “destroying” the terrorist organization is by killing every one of its current members. Last February, Marie Harf, DOS spokesperson, said, “We are killing them and will continue killing ISIS terrorists that pose a threat to us.” Then in June, Lt. Gen. John Hesterman, Combined Forces Air Component commander, stated, “We kill them wherever we find them,” and just this week, Col. Steve Warren, Operation Inherent Resolve spokesman, claimed, “If you’re part of ISIL, we will kill you. That’s our rule.”

The problem with this “kill-em’-all with airstrikes” rule, is that it is not working. Pentagon officials claim that at least 25,000 Islamic State fighters have been killed (an anonymous official said 23,000 in November, while on Wednesday, Warren added “about 2,500” more were killed in December.) Remarkably, they also claim that alongside the 25,000 fighters killed, only six civilians have “likely” been killed in the seventeen-month air campaign. At the same time, officials admit that the size of the group has remained wholly unchanged. In 2014, the Central Intelligence Agency (CIA) estimated the size of the Islamic State to be between 20,000 and 31,000 fighters, while on Wednesday, Warren again repeated the 30,000 estimate. To summarize the anti-Islamic State bombing calculus: 30,000 – 25,000 = 30,000.

Given there is no publicly articulated interest by Obama administration officials in revisiting this approach, let’s review U.S. counterterrorism bombing for 2015. Last year, the United States dropped an estimated total of 23,144 bombs in six countries. Of these, 22,110 were dropped in Iraq and Syria. This estimate is based on the fact that the United States has conducted 77 percent of all airstrikes in Iraq and Syria, while there were 28,714 U.S.-led coalition munitions dropped in 2015. This overall estimate is probably slightly low, because it also assumes one bomb dropped in each drone strike in Pakistan, Yemen and Somalia, which is not always the case.