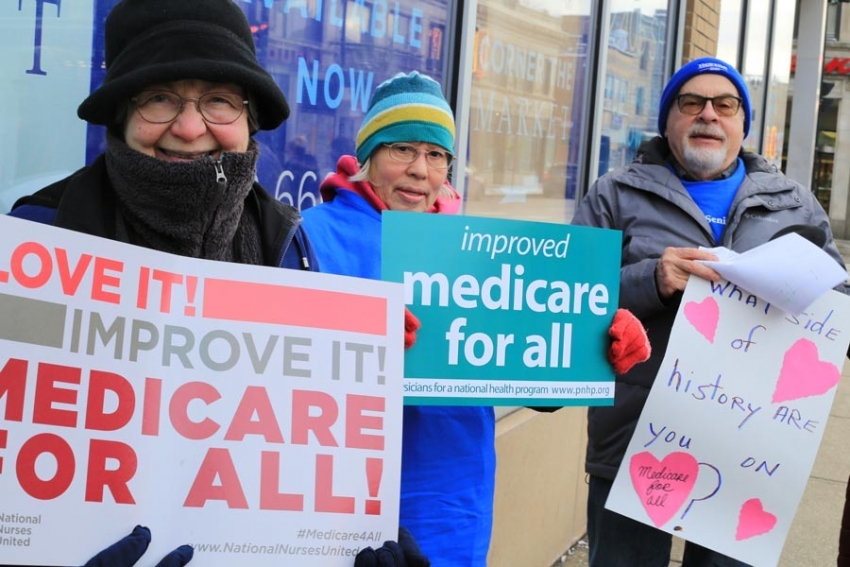 Guess Who’s Rallying For Medicare For All? Senior Citizens

Above Photo: Jane Addams Senior Caucus members demand support for Medicare for All at the office of Illinois Democratic Rep. Mike Quigley on February 13. (Photo by Kelly Viselman)

Bernie’s Medicare for All proposal would also fill the coverage gaps in Medicare.

Because seniors already have Medicare and may be retired, changing the healthcare system is not typically considered a key issue for their voting demographic. The problem? “No one’s asked us.”

CHICAGO—What began as back pain ended in a five-month stay at the hospital for an excruciating spinal infection that almost paralyzed Catherine (name changed for privacy). She is ready to go home, but to recover, she requires a hospital bed, a Hoyer lift to get from her bed to her wheelchair, a wheelchair ramp, in-home care, and transportation to her doctor. To afford it all, Catherine’s family turned to GoFundMe, a popular website for crowdfunding.

At a rally in support of Medicare for All, Dylan Kosson-Healy, 30, read aloud from Catherine’s GoFundMe page: “While $15,000 is surely a lot to ask of our family and friends, it is about the cost of her out-of-pocket medical expenses for just the next three months.” The family’s request is one of a quarter million on the platform raising more than $650 million for medical bills annually, according to the site.

Some 30 additional protesters packed into the small field office of Democratic Rep. Mike Quigley (IL-5) on February 13, the day before Valentine’s Day, to read more heartbreaking testimonies from Quigley’s constituents. Then they broke into a chant: “Congressman Quigley, support Medicare for All”—known in the House as H.R. 1384.

Led by the Jane Addams Senior Caucus, most of the members of the Chicago Medicare for All Coalition in attendance were over 65.

“Until you sign on and pass Medicare for All, your constituents have to turn to friends, family and strangers on the internet to help them survive,” said Mary Ellen Winkelman, 81, co-chair of the Jane Addams Senior Caucus.

Because seniors already have Medicare and may be retired, changing the healthcare system is not typically considered a key issue for their voting demographic. The problem? “No one’s asked us,” Winkelman tells In These Times. “They just assume we are okay with [the current system].”

Dr. Anne Scheetz, 69, retired from her clinical practice so she could focus on political advocacy work with Physicians for a National Health Program, a coalition member group.

“Clinicians are suffering from the disconnect between what they went into their professions to do for people, and what they can do,” Scheetz says. “It breaks your heart to have to tell somebody their insurance won’t pay for what [they] need.”

Single-payer healthcare would be valuable for everyone, including seniors, says Thomas Wilson, 68, board president of the Illinois Single-Payer Coalition, another member group. Medicare, in its current state, is not perfect—out-of-pocket expenses are high and not all medicines and procedures are covered, leaving those who can afford it to navigate a confusing marketplace of supplemental insurance, which still may not cover everything.

Medicare for All legislation—sponsored by Congressional Progressive Caucus co-chair Rep. Pramila Jayapal (WA-7) in the House and Bernie Sanders in the Senate—would establish a government-sponsored healthcare system that abolishes private medical insurance and makes care free at the point of service. For current Medicare recipients, this new single-payer system would eliminate out-of-pocket expenses and fill the coverage gaps, Wilson says.

About half of the 232 Democrats in the House have co-sponsored the bill, including five of Chicago’s eight Congress members. Chicago’s exceptions are Quigley and Reps. Dan Lipinski and Raja Krishnamoorthi, all facing Medicare for All supporters in Illinois’ March 17 Democratic primary.

At a prior meeting with the Jane Addams Senior Caucus, Quigley reportedly implied that Medicare for All isn’t popular among his constituents. So the group responded by sending 1,000 constituent Valentine cards calling for him to sign on, sealed in heart-shaped boxes.

While Quigley’s office did not answer In These Times’ request for comment, he told the Chicago Tribune in January he favors expanding the Affordable Care Act with a public option. He was not present at the February protest at the office he shares with Chicago Ald. Tom Tunney, but the alderman’s staff did call Quigley to listen in. (It is unclear who took the call.)

For some of the younger protesters—including members of Chicago Democratic Socialists of America (DSA) and Students for a National Health Program—it was the first time working in solidarity across the age spectrum.

“It was really impressive,” says Kosson-Healy, union attorney and Chicago DSA member. “I go to a lot of rallies that are mainly made up of younger people, and to see an intergenerational presence was uplifting.”

The protest was just the most recent of ongoing Medicare for All actions staged by the Jane Addams Senior Caucus. At an annual conference of the American Medical Association (AMA) in June 2019, for example, more than 40 activists (mostly seniors and people with disabilities) held a “die-in,” telling heartbreaking medical stories while lying on the floor with gravestone-shaped signs commemorating loved ones they had lost. Two months later, the AMA ended its membership in Partnership for America’s Health Care Future, a corporate lobbying group of private hospitals and pharmaceutical companies against single-payer.

The sentiment of the die-in—desperation, urgency—was echoed in a sign held by an older protester at the Valentine’s Day action: “Dear Quigley, people are dying of broken hearts. Do something!”