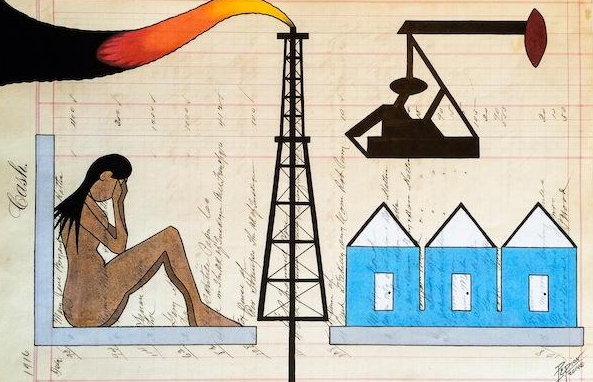 Above Photo: John Pepion An artistic depiction of what has transpired in, and transformed, culture and lives in the Bakken oil fields and beyond.

Our state and our region are hurting. Slumping oil prices mean fewer jobs and less revenue for the state. We can’t drill our way out of this problem nor can we cling to a hope that this, like the slumps of the 1970s and 1980s, shall pass. Our coast is disappearing because of local and global impacts of relying on oil. Even the pope is questioning the wisdom and morality of continued reliance on fossil fuels.

On Wednesday, we are going to the Mercedes-Benz Superdome to put forth an idea to help Louisiana and the Gulf region adapt to changes that must be made. On that day, the federal government is auctioning 43 million acres of our Gulf of Mexico to the oil industry for drilling. We will be at the Superdome with hundreds of others from our region and beyond to call on President Barack Obama to cancel this auction and cease issuing new drilling leases in the Gulf of Mexico. It is time.

Ordinary people are behind this request. We are natives of the Gulf Coast. We are mothers, fathers, grandparents, teachers, doctors, retirees, lawyers, fishermen, students. We are like the ordinary people along the Atlantic Coast who achieved a stunning victory last week when Obama announced that the federal government would not open the Atlantic coast for drilling.

In that debate, as in the Gulf, the oil industry promised new jobs and new revenue if only we would drill. But why not focus instead on developing a renewable energy industry that now employs 7.7 million people worldwide? If Louisiana doesn’t get on the bandwagon soon, we risk being left behind altogether. Further development of our water management industry, including repair of our coast, also would put people to work.

And though the oil industry is laying off workers now, there is actually much work to be done. First, the oil industry should hire workers to repair its aging infrastructure, both on and off shore. The equipment is rusty and dilapidated, and conversations with workers reveal a real fear that there aren’t enough people on the job to do the work properly. There are oil companies with profits sufficient to make these hires, even in these times.

The problems with the oil industry in Louisiana are painfully obvious. The relentless digging of canals has led to destruction of our wetlands that once offered important protection from storms. The first official climate refugees in the United States are the Louisiana community of Isle de Jean Charles. The destruction of this Native community underscores the harsh reality that poor communities, African-Americans, Native Americans and the Vietnamese communities are the most vulnerable, not just to coastal loss but to the industry’s relentless pollution.

The location of Wednesday’s lease auction in the Superdome is painfully ironic, given the Dome’s role as the evacuation of last resort during Hurricane Katrina. Who can forget what happened there? The oil industry had a hand in making us vulnerable to Katrina and to storms yet to come. And yet our government is using the Superdome as the venue to let the oil industry continue its harms.

Along the Atlantic Coast, ordinary men and women harnessed the power of we the people to prevent oil drilling. We, the people in the Gulf region, also are standing up and saying no to future oil leases in the Gulf of Mexico. It’s time for a change.

Anne Rolfes is the founding director of the Louisiana Bucket Brigade, an environmental advocacy group. Cherri Foytlin is the author of “Spill It: The Truth About the Deepwater Horizon Oil Spill.”