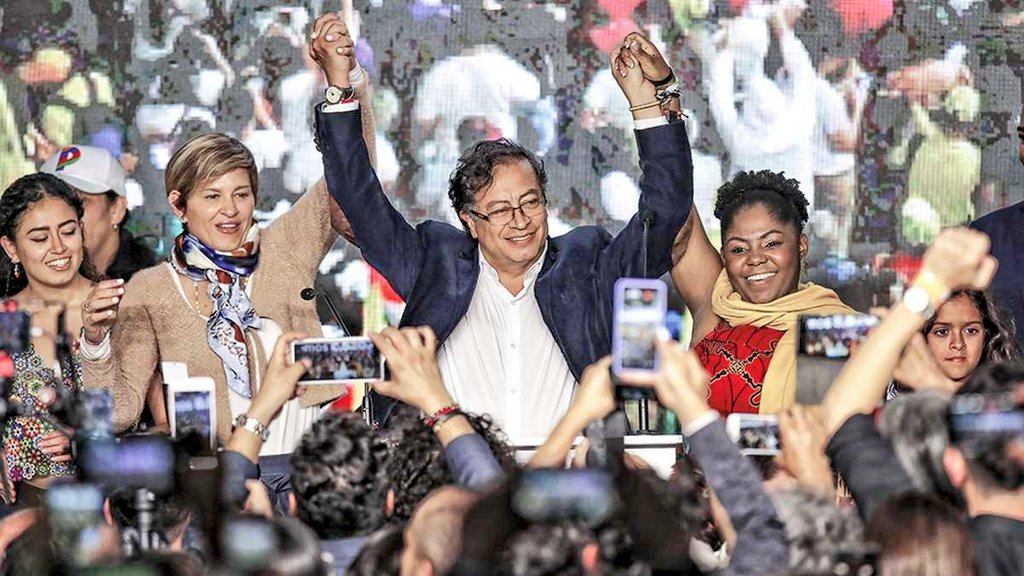 Above Photo: The left-wing candidates of the Pacto Histórico coalition ticket in Colombia celebrated a win Sunday evening in Bogotá. Evo Morales / Twitter.

Celebrations took place this evening as people took to the streets of Colombia after left-wing presidential candidate Gustavo Petro was deemed the winner of the second-round election. This victory makes his running mate, Francia Márquez, the first Afro-descendant woman who will serve as vice president once the term begins in August.

“I called Gustavo to congratulate him on his victory and offer him my support to fulfill the promises of change for which Colombia voted today,” Hernández tweeted. The millionaire ran on the League of Anti-Corruption Governors ticket and had been likened to a “Colombian Trump” for his brash manner. “Colombia will always count on me.”

Aminta Zea, a U.S. citizen who observed the elections today, documented Colombians in the southern city of Calí embracing each other, jumping, waving flags and honking horns.

Beautiful to see Colombianos celebrating Petro’s historic win in Cali. Just see for yourself. What a huge and important shift not only for Colombia but also for Latin America and the world!! pic.twitter.com/WC7QQ1e1tp

In the capital of Bogotá, the streets exploded with cheers and honks.

Petro’s first tweet came within an hour of the announcement.

“Today is a holiday for the people. Let […] celebrate the first popular victory. May so many sufferings be cushioned in the joy that today floods the heart of the Homeland,” he tweeted. “This victory for God and for the People and their history. Today is the day of the streets and squares.”

Márquez attracted many voters because her campaigns for both president and vice-president prioritized lifting out of poverty and oppression the country’s historically marginalized groups. She won the 2018 Goldman Environmental Prize for her activism.

“This is for our grandmothers and grandfathers, women, youth, LGTBIQ+ people, indigenous people, peasants, workers, victims, my black people, those who resisted and those who are no longer…” she tweeted. “Throughout Colombia. Today we start writing a new story!“

What’s Next for Latin America?

This victory marks a shift in the Western Hemisphere. While left-wing revolutions and candidates have over the decades swept states like Cuba, Venezuela, Nicaragua, Bolivia and Honduras, Colombia had remained a militarized U.S. ally.

At least one observer had dismissed Petro’s earlier comments against the Bolivarian revolutionary process underway in Venezuela as a way to distance his popular left-wing campaign from a neighboring country many in Colombia have seen as a failure.

Congratulations came pouring through from officials and former officials in Bolivia, Mexico and other states.

In May, the United States invited Colombia’s defense minister to Washington to announce Colombia as a “major non-NATO ally.” The South American country’s closest access point to the Atlantic Ocean is the Caribbean Sea. The $4.5 billion in military arms and training the United States has poured into Colombia now remains a question for the incoming left-wing pair that have remarked on changing relations with the United States. Meanwhile, paramilitary violence throughout the countryside, as well as death threats to Petro and Márquez, threaten to amplify tensions in Colombia.

While his millionaire competitor—Hernández—claimed to be of the people, Petro said he would call a national emergency upon entering office to address hunger in Colombia. Joblessness, empty bellies and dangerous housing plague the country. The situation prompted last year’s month-long national strike.

Petro had been criticized for announcing he would end oil and gas exploration as well as phase out fossil fuels as a way to address global climate change and transform the economy. Coal and oil shipments account for almost 40 percent of the country’s exports. His announcement worried the industries.

Afro-Colombian activist and community official Victor Hugo Moreno Mina was with Márquez when armed men shot at their group during a meeting in a rural area on May 4, 2019. He said in the following exclusive interview with Toward Freedom that many areas of Colombia’s economy, as well as the societal structure, need to be transformed.

The Petro-Márquez win comes six years after peace accords were signed with the Revolutionary Armed Forces of Colombia-People’s Army (FARC-EP), which agreed to put down arms to end decades of violence. Rodrigo Londoño, a former FARC-EP commander, hailed today’s results as a victory for the peace process.

The second-round election was marked by reports of irregularities, as was the first round held on May 29.

Alejandra Barrios, director of Misión Observadores Electoral (MOE), an independent agency that coordinates domestic and international election observers in Colombia, reported some ballots had been marked off before voters had a chance to choose a candidate.

Voter intimidation and threats were cited for low turnout during the first round.

AfroResistance, an organization that supports Afro-descendant women and girls in the Americas, brought delegations into the country to observe both rounds.

“It was [a] clean and fair election in Colombia. Democracy won. Black people won,” the organization tweeted.