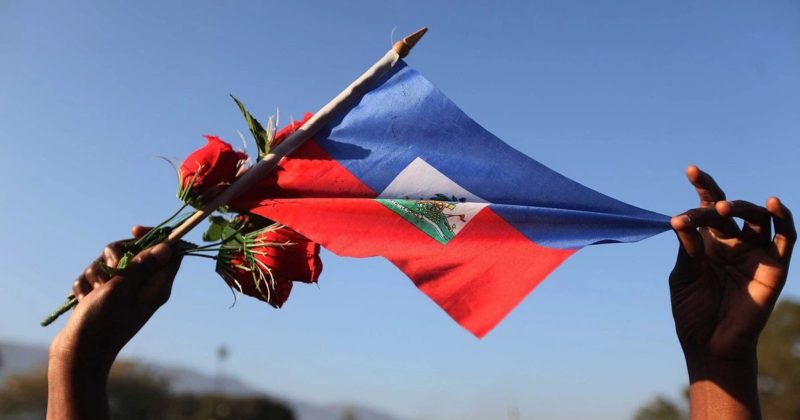 In 1815, Spain’s defeat of Simón Bolívar’s revolutionary army in Venezuela nearly extinguished the dream of independence in South America. After the loss, Bolívar sought political asylum in the only free republic in Latin America: Haiti. At the time, Haiti was a safe harbor for revolutionaries and formerly enslaved Africans. Although the republic made promises to colonial powers that it would not intervene in freedom and independence struggles, Haiti continued to support rebellions, intercepted ships carrying enslaved people, and freed its human cargo. For Haiti, colonialism and slavery anywhere posed a threat to the republic’s own independence and humanity.

Thus, when a defeated Bolívar landed in Port-au-Prince, President Alexandre Pétion understood the significance of the man who led the liberation movement. Pétion offered Bolívar 1,000 rifles, ammunition, and other supplies; he also provided hundreds of Haitian sailors and soldiers who had fought in the Haitian Revolutionary War. The offering came with one condition: Bolívar had to abolish slavery in South America when he founded a new republic; Bolívar agreed. He and his army once again took on Spain — returning to Haiti a second time for assistance — and triumphantly declared Venezuela an independent country in 1821. After later defeating Spain across South America, Bolívar declared himself president of Gran Colombia (present-day Venezuela, Colombia, Panama, and Ecuador), Peru, and Bolivia.

Foreshadowing Latin America’s present relationship to Haiti, Bolívar broke his promise to Pétion. Rather than wholly abolishing slavery, Bolívar sought to maintain Latin America’s racial and class hierarchy so that white elites like himself would not fall to a “pardocracia”, a so-called mulatto takeover. Having seen what it meant for Black people to be truly free in Haiti, when his own Black and Indigenous generals launched a coup against his growing authoritarianism in 1828, Bolívar complained bitterly that they had the audacity to “… want absolute equality.” As a warning to South America’s Black and brown population, he had the mixed-race leader of the coup, José Padilla, executed.

Nearly two centuries later, many of these nations have been as openly hostile to Haitian immigrants as they are to their own Black Latinx populations. “[Latin] America owes Haiti its independence. … The Haitian Revolution offered a model for a successful insurrection against a colonial power,” Tatiana Flores, Ph.D., a historian and associate professor in the Department of Latino and Caribbean Studies at Rutgers University, told Refinery29. For instance, the Haitian Revolution and its Declaration of Independence stated that “we must take any hope of re-enslaving us away from the inhuman government. … In the end, we must live independent or die;” this allowed the Black and brown majority of the Americas to see their humanity recognized and offered a model for an equitable society.

From 1791 to 1821, the success of the Haitian Revolution sparked a series of rebellions by enslaved people in Santo Domingo, present-day Dominican Republic, which shares an island with Haiti. According to Dominican historian Quisqueya Lora Hugi, these movements had “bigger objectives, such as the overthrow of colonial rule, … the implantation of racial equality, or the union with Haiti.”

Haiti responded to the cries for freedom from the enslaved people of Santo Domingo twice. In 1801, following a major rebellion on the Boca de Nigua sugar plantation, Toussaint L’Ouverture, the architect of the Haitian Revolution, chose that site to announce the abolition of slavery in Santo Domingo. But freedom was short-lived; France later captured L’Ouverture and took over Santo Domingo in a strategic effort to recapture Haiti long after the revolution had been won.

Like Bolívar, Dominican rebels appealed to Haitian rulers for arms and support as they attempted to overthrow colonial rule and unify with Haiti. With the support of the Black majority, Haiti’s president Jean-Pierre Boyer abolished slavery and proclaimed Dominican emancipation for a second time on February 9, 1822. Hispaniola became the only independent nation in the Caribbean and the only region in the Americas where slavery was abolished.

But 22 years later, after the unification period with Haiti ended, the white elite re-annexed Santo Domingo to Spain. Black Dominican rebels understood the implicit threat of re-enslavement and again implored Haiti for its support in overthrowing Spanish rule. Defying threats from Spain, Haiti supplied the Dominican rebels with arms, fighters, and safe harbor. Dominicans, with the help of their Haitian allies, defeated the Spanish in 1865. Today, however, Haitians face the most extreme human rights abuses in the Dominican Republic; in the neighboring country, many people of Haitian descent are trapped in a form of indentured servitude on sugar plantations, while their descendants are stripped of their citizenship.

This cycle of Latin American nations running to Haiti for assistance and then turning their backs on the country has continued throughout history. When Mexico gained its independence, it, too, understood that its sovereignty would remain endangered as long as Spain continued to maintain a slave colony in Cuba. As such, in 1830, Mexico clandestinely approached Haitian President Jean-Pierre Boyer for help staging an invasion of Cuba to undermine Spanish authority in the region. Although the plan was never executed, Mexico sought Haitian assistance because the Caribbean nation had consistently supported the liberation of its neighbors. Today, Mexico has become a willing foot soldier in the U.S.’ xenophobic policies toward migrants, including Haitian asylum-seekers. News reports and videos on social media show the Mexican National Guard and far-right groups violently attacking Haitian migrants on the southern border.

Presently, Haitians are suffering the worst abuses and, even more painfully, a piercing silence, by the people the country has helped most. The same Latinx organizations that rightfully rallied when migrant children were held in cages and separated from their parents have mostly been quiet as a new border crisis unfolds, one where U.S. Customs and Border Protection (CBP) officers have whipped and corralled Haitian migrants collecting food and water for their children. The same nations that came to Haiti to support their liberation now actively undermine Haitian sovereignty.

Foreshadowing this betrayal, Haitian Founding Father Jean-Jacques Dessalines’ “I Have Avenged America” speech echoes Latin America’s treatment of Haitians: “You have placed it upon your hearts, that you may become (like your natural enemies) cruel and merciless.”