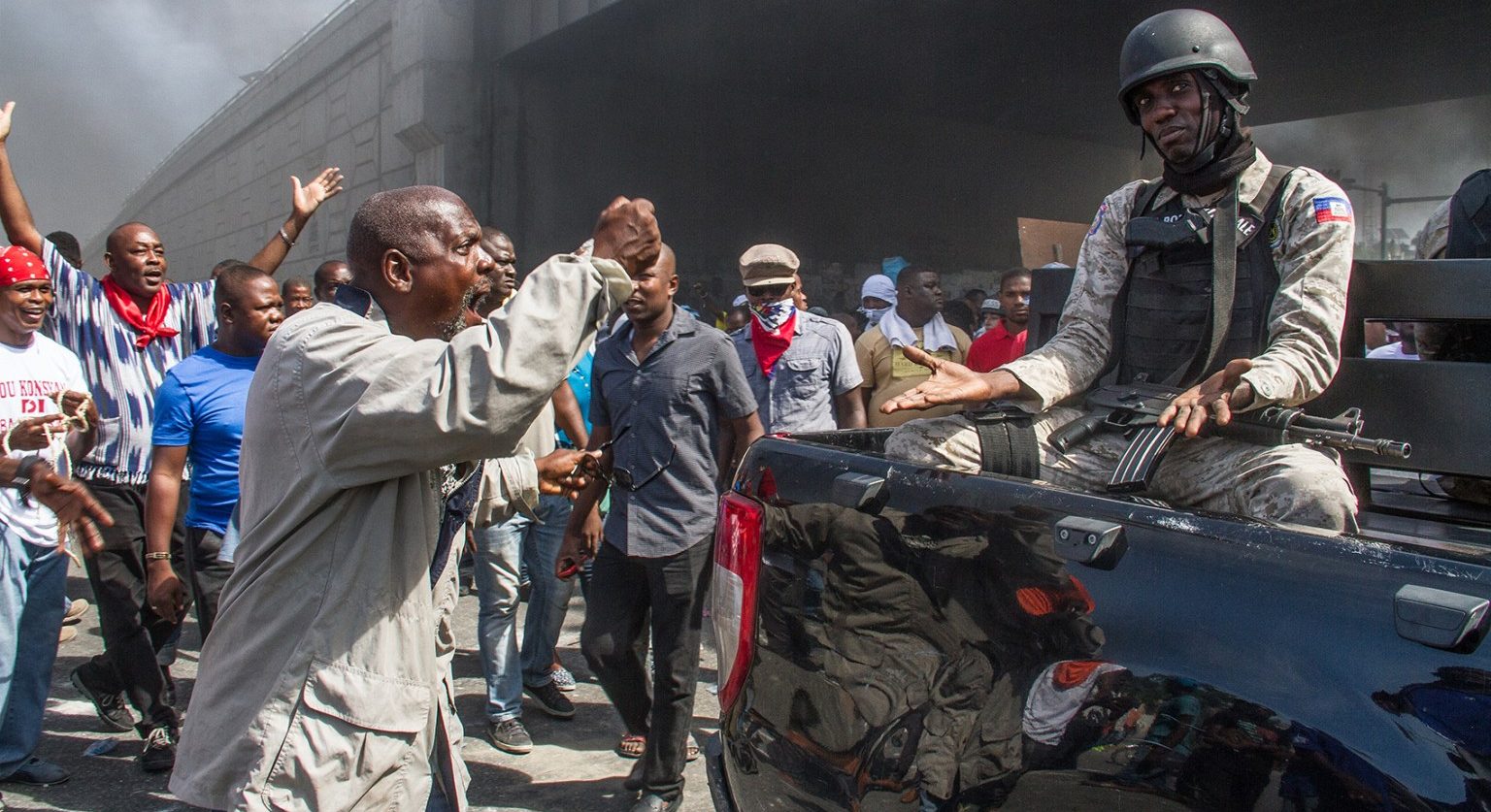 Above photo: Protesters demonstrate in front of a police vehicle in June 2019, demanding President Jovenel Moise step aside. These calls have intensified this year, amid a constitutional crisis. Haitian Times photo by Patrice Douge.

Amid ongoing protests, the diaspora watched as journalists reported the arrest of a Supreme Court justice and a police inspector in Haiti on Feb. 7, the day opposition leaders, civil society and human rights groups say President Jovenel Moise should step down.

During the week leading up to Feb. 7, politicians and civil society groups from throughout the diaspora called for U.S. intervention, some citing the need to convene dialogue, while others called for a transitional government. The U.S. State Department has stated that Moise’s term ends in February 2022 and has called for elections this year, despite widespread distrust of the electoral process.

The Moise administration agrees, maintaining that an interim government was in power for a year before Moise was sworn in on Feb. 7, 2017. Protesters and opposition figures have cited the constitution, saying Moise’s term officially began in February 2016.

“They need to act swiftly and monitor the situation closely,” NHAEON chair Alix Desulme, said in a Feb. 7 interview. “The U.S. is dealing with [COVID-19] but this is an urgent matter as well and we’ve got to try to deal with both.”

Desulme praised the seven members of Congress who wrote a letter Feb. 6, encouraging the U.S. to reject the undemocratic actions of President Moise. Among other things, the letter criticized Moise for pushing dubious constitutional reforms and unilaterally appointing key officials. It was co-signed by Rep. Yvette Clarke, who represents New York’s Ninth Congressional District in Brooklyn, home to one of the largest Haitian communities in the U.S.

That same day, members of Brooklyn’s Haitian community protested in Flatbush, denouncing U.S. support for Moise and demanding an end to state-sanctioned violence.

Others in the diaspora have not backed the growing calls for Moise to step down. Celucien Joseph of Fort Pierce, Florida, said on Twitter that Moise has another year. He called for clarity in the sections of Haiti’s constitution that govern when a president officially assumes office.

Judite Blanc, a Manhattan-based psychologist, co-signed a Feb. 4 letter with other social science researchers that criticized international support of the 2021 elections the Moise administration is planning.

“This has been one of the most difficult weeks of the year for me so far, a lot of emotion, anger, sadness,” said Blanc, who expressed concern over the insecurity and political violence. “As a population health researcher, I’m aware that political situations can determine your health.”

In a phone interview, Blanc also expressed concern over the Moise administration’s actions, including the November creation of an intelligence agency and the Feb. 7 arrest of Judge Ivickel Dabresil and Police Inspector General Marie Louise Gauthier, for alleged conspiracy against the government.

“It’s hard today, to feel like you are powerless,” Blanc said. “It’s impossible to be at peace in this context.”

Sam Bojarski has been covering Haiti and its diaspora for The Haitian Times since 2018. He is currently covering New York’s Haitian community as a Report for America corps member.