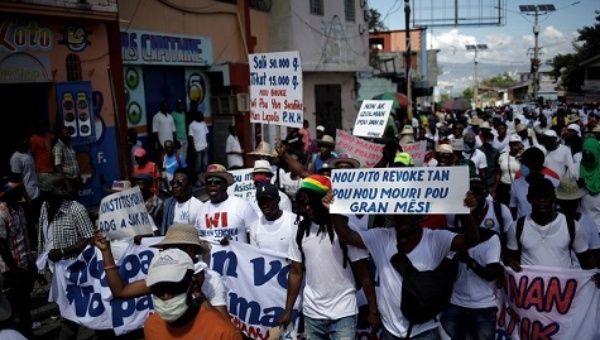 Above Photo: Police have organized several protests for better pay and conditions since the beginning of the year. | Photo: Reuters

Police demonstrations are not linked to the anti-corruption protests that shook Haiti for most of 2019, in which police violently repressed civilian protesters.

Haitian police and members of the army shot at each other for hours Sunday near the presidential palace in the capital Port-au-Prince, during a protest organized by police for better pay and conditions.

Dozens of officers in uniforms marched faces covered, along with hundreds of supporters toward the palace to call for better pay and conditions, according to the Associated Press.

The demonstrators stopped outside the army building, which faces the presidential palace. AP journalists saw soldiers shoot into the air, just before the exchange of fire erupted between both factions.

At least three police officers were wounded, officers told AP. The army’s high command said in an online statement that a soldier had been wounded by a bullet in the back.

Since the beginning of the year, police have organized several protests as the Caribbean island nation is enduring a harsh economic and political crisis. Police demonstrations are not linked to the anti-corruption protests that shook Haiti for most of 2019, but they are rooted in the same dissatisfaction with President Jovenel Moise’s policies.

Police protests gained momentum this month after a half-dozen officers were fired after they tried to unionize.

A police officer who asked for anonymity told reporters outside the palace that officers were demanding the return of their colleagues as well as a salary increment for all officers.

“Until this is done we will not sit and talk,” said the officer. “The president has proven that he does not care about our demands.” However, police have also been part of the general crackdown on civilian protesters against Moise’s government.

Haiti’s President Jovenel Moise has been ruling by decree since January after lawmakers’ mandates, as well as those of most the senators, came to an end in October with no successors elected as the country failed to hold elections.

The impoverished Caribbean nation is facing one of the worst and longest political, economic and social crises of its recent history.

Severe shortages of food and fuel and have been paralyzing the country for months now.

The United States backed president, who has refused to step down, is facing widespread anger over inflation, rampant violence, allegations of corruption, particularly the embezzlement of the funds destined for social programs from the Venezuelan led Petrocaribe cooperation program.