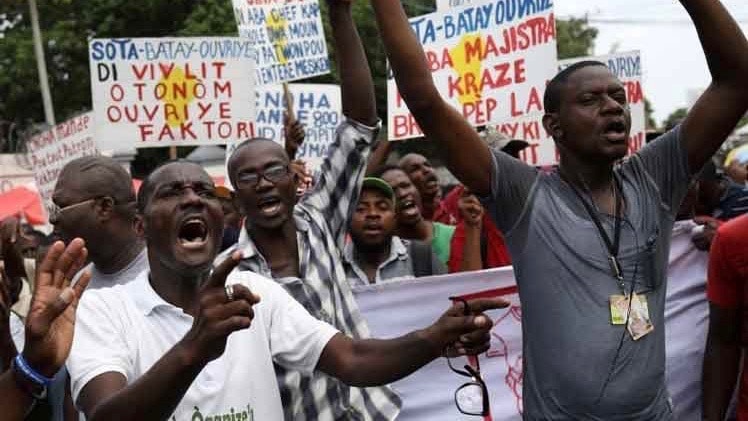 Above photo: Since January 10, thousands of citizens, students, workers, members of various social movements and opposition political parties have been mobilizing across Haiti to demand that President Jovenel Moïse leave power on February 7, the last day of his term. Prensa Latina.

Haitian citizens, social movements, trade unions and opposition political parties are demanding the resignation of president Jovenel Moïse, who seeks to extend his term of office until February 2022, which according to the constitution ends this February 7

Haiti has been experiencing a new wave of protests against US-backed President Jovenel Moïse. Since January 10, thousands of citizens, students, workers, members of various social movements and opposition political parties have been mobilizing across the country in rejection of Moïse’s decision to hold presidential and legislative elections on September 19 and a referendum to replace the current constitution, which is the main achievement of the democratic movement of 1986, on April 25.

Haitian citizens and the opposition denounced Moïse’s decision as an attempt to extend his term of office until February 2022, which according to the constitution ends on February 7, 2021. The opposition also considered the referendum “invalid” and “unconstitutional” as the 1987 Constitution prohibits its modification through popular consultation. The citizens as well as the opposition are demanding that Moïse step down this February 7 and that a transitional government be set up immediately for a period of three years to later organize the general elections.

Several social movements, trade unions and opposition parties have called on the people to organize against the national government of right-wing Tèt Kale Party and intensify their measures of protest throughout the national territory until February 7. In the past three weeks, almost everyday, at least one demonstration or mobilization was carried out in the country.

Yesterday, on January 31, hundreds of Haitians took to the streets of several cities to demand Moïse’s resignation. In the capital, Port-au-Prince, as well as in the cities of Petit-Goave, Mirebalais, Verretes and Saint-Marc, the protesters blocked major roads and highways with burning tires and stones.

Haitian trade unions, such as the National Union of Haitian Workers, the United Movement of Haitian Workers (MUTH), the Lawyers’ Collective for the Defense of Human Rights and the Anti-Corruption Union Brigade (BSAC), have called for a general strike today and tomorrow, on February 1 and 2, to demand that the president respect Constitution and leave the National Palace. Since early morning, barricades have been erected in different parts of the country.

In the face of the recent popular insurrection, Moïse’s administration has deployed security forces in the capital and other important cities to suppress the social uprising. The Haitian National Police has been using tear gas and water cannons to repress the protesters.

Last week, on January 28, Moïse insisted that he must remain in power for another year. He claimed that he assumed power on February 7, 2017 to serve a five-year term, so he will retain the leadership of the republic until 2022.

However, the opposition parties argued that Moïse’s term ends in February 2021 according to the article 134-2 of the 1987 Constitution, which provides for an early start of a new presidential term if there were problems with the counting of votes in the elections. They stressed that this article is applicable to the present government because of what happened in the 2015 elections. The October 2015 elections were annulled due to allegations of fraud and were repeated in November 2016.

“Moïse is clinging to power when the priority must be to promote economic, social, and political development. His term is over. It began when President Michel Martelly’s government expired five years ago, in February 2016” said lawyer André Michel, leader of the opposition Democratic and Popular Sector party.

The Provisional Electoral Council (CEP) of Haiti announced the dates for general elections and the constitutional referendum on January 7. The opposition, in addition to rejecting the CEP’s announcement regarding the elections, also rejected the appointment of its representatives by the president. They denounced that the decision on appointment was taken without a political agreement and the appointed members were members of the ruling party.

At the same time, today, the main opposition organizations in Haiti reached an agreement on the transition government after Moïse’s eventual departure. As agreed in November 2019, they decided that a judge of the Court of Cassation will assume the presidency of the country. Only Fanmi Lavalas party, led by former president Jean Bertrand Aristide, did not agree to this proposal.

Since July 2018, Haitians have been tirelessly organizing and mobilizing against Moïse’s corrupt and neoliberal regime, which has plunged the country into a deep social, political and economic crisis. Moïse along with other current and former ministers and government officials have been accused of embezzlement of around USD 3.8 billion from Venezuela’s Petrocaribe funds. Moïse’s austerity measures, imposed in accordance with the International Monetary Fund policies, have pushed the majority of the country’s population into poverty.

The citizens, who up until last year were denouncing the extreme scarcity of food, fuel and widespread corruption within the government, in this recent wave of protests are also condemning the increase in violence and kidnappings by criminal gangs to extort money. According to local media networks, since mid-2020 till date, more than 1,000 kidnapping cases have registered in Haiti and the authorities have failed to control the situation. School students have been their main targets and several schools in the capital have temporarily been closed. Many families are moving to the neighboring country, Dominican Republic, to escape the growing insecurity in Haiti.