Half A Million American Minors Now Live In Mexico

Above Photo: Children in this group are growing up with roots in both the U.S. and Mexico.Aleks_Shutter/Shutterstock.com

While much of the current news has been focused on Central American migrants making their way through Mexico to the U.S., little attention has been paid to a different migration story: the number of American-born minors – all U.S. citizens – who left the U.S. to live in Mexico.

In Mexico, about 900,000 residents were born abroad as of 2015. Some of these are Central American migrants, but the large majority was born in the U.S. and is under age 18.

In fact, between 2000 and 2015, the population of American minors living in Mexico more than doubled. By 2015, nearly half a million minors born in the U.S. lived south of the border.

Although there have always been U.S. citizens under 18 in Mexico, never before have so many left the U.S. to live and grow up in Mexico. Who are these children and adolescents? Where and with whom do they live in Mexico?

Our research, published on June 10, uses Mexican census and intercensal data to reveal new insights into the characteristics of this group of young American citizens in Mexico.

When did they leave the US?

The growth in Mexico’s population of U.S. citizen minors largely occurred between 2000 and 2010. During this period, the Great Recession led to high rates of return migration to Mexico. At the same time, the number of U.S. removals increased annually, to a peak of 409,000 in 2012.

Our interviews with returnees in Mexico City suggest that both economic crisis and immigration enforcement drove the migration of U.S.-born minors to Mexico in the second half of the 2000s. 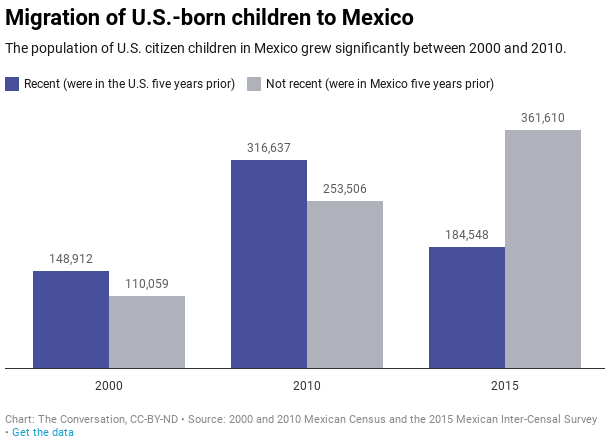 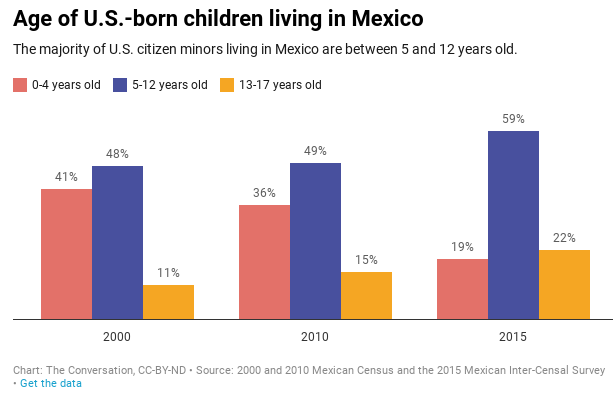 Who are their parents?

The vast majority of this group has Mexican-born parents. 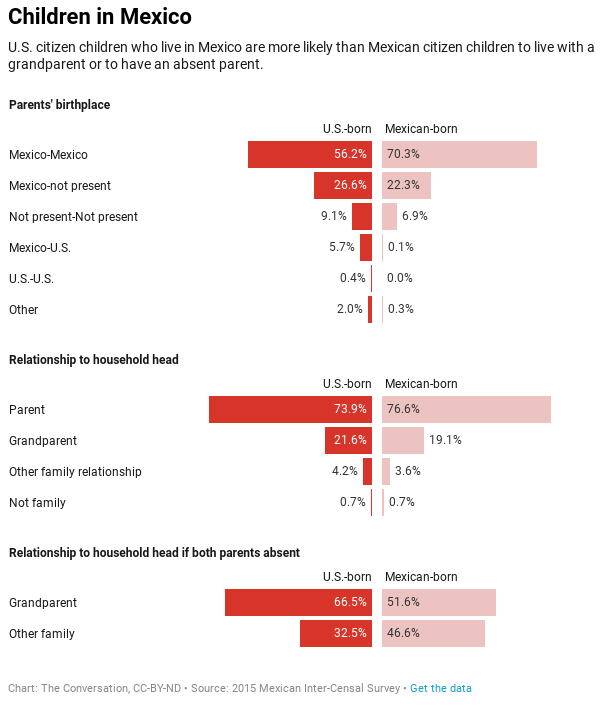 Where in Mexico do they live?

The largest group of U.S. immigrants from Mexico originated in the center-west of Mexico, the historic migrant-sending region that includes the states of Jalisco, Michoacán and Guanajuato.

However, U.S.-born minors settled in Mexico in locations that are distinct from where most U.S.-bound immigrants originated. Our analysis shows that the largest group of U.S.-born minors lives in states along the Mexico-U.S. border, especially Baja California and Chihuahua, where cities like Tijuana and Ciudad Juárez are located.

This suggests that, though these minors now live in Mexico, they maintain some ties to the U.S. For example, some parents live along the border in order for their children to commute from Mexico to school in the U.S.

What does the future hold?

The migration of U.S.-born minors from the U.S. to Mexico presents unique challenges to the minors themselves, as well as to their families and their communities.

The U.S. public is concerned with the more than one million undocumented youth – or DREAMers. Many of this group live in “mixed-status families,” where at least one member is a U.S. citizen. U.S. citizen minors in Mexico also live in mixed-status families, but in some ways the challenges they face are distinct: They have the possibility for legal integration, but still face barriers to social and economic integration in Mexico.

We do not know what the future holds for this large group of young U.S. citizens with deep roots in both countries. The answer will undoubtedly unfold on both sides of the border.