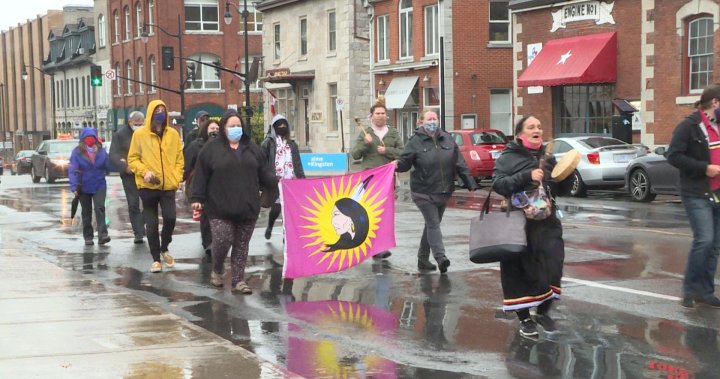 Above photo: A show of solidarity in Kingston on Monday for Indigenous lobster fishers on the East Coast. Global News.

In solidarity with Mi’kmaq fishers.

Lobster is a major commodity and popular dish in Atlantic Canada, but there’s now a growing list of restaurants taking the succulent shellfish off its menu.

The removal of lobster dishes is a move to show solidarity with the Mi’kmaq and to condemn the ongoing violence stemming from the lobster dispute in Digby county.

Co-owner Matt Boyle says lobster is off the menu as long as the ongoing lobster dispute continues between Indigenous and non-Indigenous fishers in lobster hot-spot St. Mary’s Bay, located in southwest Nova Scotia.

“We wanted to try and do something. Even though it might be small, it’s meaningful,” said Boyle. “We don’t agree with violence, with oppression, racism or acts of vandalism.”

Dear Friends was the first restaurant in the Halifax region to pull lobster from its menu, a decision that was met with immediate hate and poor online reviews and then the community support came piling in.

“Immediately it was met with a lot of hate, some threats and we were the recipients of a cyber-bullying campaign to decrease our validity online,” said Boyle.

Kourosh Rad and his staff at the Garden Food Bar in Halifax met over the weekend and discussed pulling lobster from its menu and the decision was unanimous.

“Some of our staff was concerned about the backlash but we ultimately decided to do it, because it’s the lobster that’s at the centre of this dispute,” said Rad.

Pulling lobster from the restaurant menu isn’t a move against the commercial fishermen, says Rad, it’s solely a decision against all the violence.

“It’s a decision based on solidarity more than anything else,” said Rad. “The violence is despicable and it needs to stop.”

On Sunday, the RCMP charged a 31-year-old Yarmouth man with arson in connection with a vehicle fire that happened on Oct. 13 outside a lobster pound in New Edinburgh.

RCMP also charged a 46-year-old Digby County man with assault, in relation to a physical altercation caught on video with Sipekne’katik First Nation Chief Michael Sack that occurred on Oct. 14 in New Edinburgh.

The Lobster Council of Canada is against the boycott of the lobster on local menus but understands the concern, says executive director Geoff Irvine, who is working with all sides of the dispute trying to find a quick resolution.

“The only way we are going to get through this is to have the parties come together and work out a way to share the resource,” said Irvine. “Were just encouraging them to do it and pressure from the market will hopefully encourage them to do it quicker.”

Lobster exports from Nova Scotia are delivered to more than 60 countries and account for $1.2 billion in revenue.

Irvine says the Department of Fisheries is now at the negotiation table with the Indigenous representatives to get a resolution in place.

“Once it starts to impact our market, and once people start to get hurt and things get burned, it’s time to make it a high priority,” said Irvine. “I think we’re at a point where the federal government is taking it very seriously and that’s a good thing.”

More than a thousand people attended a rally on Sunday in Halifax to show solidarity with the Mi’kmaq fishers.

For restauranteurs like Boyle, the lobster boycott is their way of taking a stand, pushing the conversation and applying pressure to the groups involved to find a solution.

“I’m sure the more people are speaking out about this, the faster we can come to a peaceful resolution.”