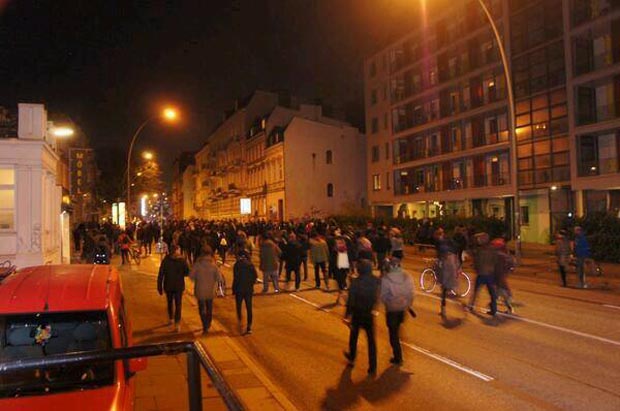 Riot police are continuing their installment of martial law in Hamburg, in a designated area referred to as the “danger zone.” Also, details have emerged that indicate police have fabricated claims of an attack on a police station as an excuse to continue restricting the area, but more on that later.

Predictably, oppressive police tactics have backfired as demonstrators have taken to the streets of the Hamburg-occupied territory demanding they free the area. Police have effectively been holding a large part of Hamburg under arrest, by imposing the “danger zone” to intimidate the population for siding with activists defending Rote Flora two weeks ago, and to suppress further demonstrations. The area will remain restricted for an unspecified amount of time, and probably at least until spring.

Multiple spontaneous demos have taken place in the “danger zone.” Some 50 people were detained from two groups (one of 30 who were all kettled and detained at Lerchstr, and another one of 50 which was kettled at Schulterblatt, where Rote Flora is) were detained by cops and taken away in buses on January 5th. Today, January 6th, a spontaneous demonstration in the danger zone has begun and is estimated to have over 200 in attendance, and a demo with about 100 people started at Brunnenhof (church). Detentions have been reported in Jägerpassage and at Jäpa courtyard.

Activists and locals believe that the “danger zone” was created to stop the flood of demonstrations for the lampedusaHH refugees and the Rote Flora that have been going on for the last couple of months. The cops have de facto cancelled any right to protest or free expression in their occupied territory. Basically, anyone who does not submit to their force is to be arrested. They brought in several buses, expecting to sweep the streets of anyone trying to resist their rules.

Cops have taken over the streets, punishing people for simply being outdoors and “looking suspicious.” For instance, they are targeting people of color, and those who wear black clothing or look “alternative.” During a senate debate about the danger zone, a politician was quoted saying, ”We control people who look like radical left or are members of the leftwing scene.” In March, there will be a special conference of the interior ministers of all German states to speak about new laws against “violent leftwing activists.”
Outraged by the police occupation of a large part of Hamburg, demonstrators defied cops: they took to the streets chanting and carrying banners which read, “Abolish the danger zone.”

As police started to arrest people they found on the streets, several groups of about 150 started marching towards Altona district, and towards St. Pauli district. Demonstrations were announced earlier today on social media, but some broke out spontaneously during the night, as police repression intensified. The more buses police brought in, the more people flooded the occupied streets in defiance.

Police say they have imposed the “danger zone” as a consequence of two supposed attacks on the Davidswache police station, but at least in one case it seems they have lied in an attempt at self-victimisation. They claim there were two attacks on their stations, one on December 20th, and another one on December 28th (also citing clashes in the Rote Flora demonstrations on December 21st, where in fact, as this video clearly proves, riot cops were the ones who brutally attacked demonstrators with teargas and water canons). Cops claimed one of their own got severely injured during the supposed 28th attack, but they made no arrests that night, just issued a ban order to restrict people from being in that area.

As the details of police press releases did not add up, a lawyer investigated and concluded that cops did not have sufficient evidence to prove their claims about the December 28th attack. When confronted with the lawyers findings, the cops said that there was an attack, but that there was a mistake in their press release, and that the officer was actually injured 150 meters away from the police station near a bar district. When asked if there was any video proof from the surveillance cameras at the station, police produced nothing. They were even asked if the lawyer was lying, and said they don’t know.
Activists have continued to use social media to provide up to date reports from the danger zone, and also to mock it. Recently, conservative politicians have condemned Twitter use as a guerilla tactic.  On Facebook, an event was created to mock the military-style police occupation. People created a sarcastic game where the most repression they faced from cops, the more points they gathered:
“1 CHECKPOINT SCORE = 5 CREDITS!
1 PIC POST TWITTER = 10 CREDITS!
1 DOCUMENT PIC POSTING TWITTER = 15 CREDITS!”
They were urged to come out walking with their families to show cops who their “enemies” were, and to “Wear black or use some band/soccer (football) MERCH SWAG to win.”

The dark sense of humor of the occupied Hamburg population only highlights the ridiculous and arbitrary measure taken by cops against them.

Since, people can be stopped and frisked any time, residents and activists encouraged each other to “of course put funny little things in your backpack or in the jackets.”

The police occupation of Hamburg is unprecedented on this scale, as literally everyone in their occupied land was a suspect apriori. The more absurd their measures against the local population of Hamburg, the more relevant this sign on the streets has become, reading: “Attention, cops out of control”.