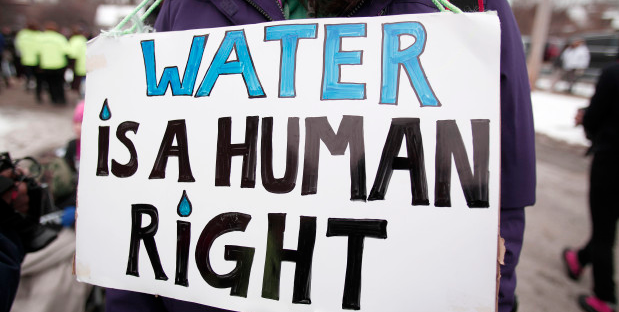 Note: The article below focuses on Flint but could characterize urban America. It covers many of the highlights of a failed urban agenda over the last two generations, but US urban centers were in distress even before the events described. The US had commissions about urban problems in the 60s after riots burned many cities. One major item missed in the discussion below was the war on drugs and the mandatory sentencing craze of the 1980s and 90s. These were also urban focused and targeted the black community. They resulted in destroying families and communities and making it difficult for those incarcerated, usually black males, to build economic wealth. The United States is in desperate need of a new urban agenda. It may be up to urban communities to create that agenda because the federal government seems not to be listening. KZ

The national spotlight is on Flint, Michigan as it struggles with a contaminated public water system that has been poisoning its people over the past two years. This happened because a state emergency manager appointed by Governor Rick Snyder ordered a change in the water supply to save money for the cash-strapped city.

As the full scope of this avoidable human and economic crisis in Flint becomes clearer — one must ask how such an iconic and historically vibrant American city — could have been plunged into such extreme jeopardy?

How did Flint become “cash-strapped”? How did it lose its own local government control to a state appointed czar? What combination of events caused Flint’s population to be cut in half — with thousands of manufacturing jobs disappearing, the city’s tax base decimated, even police and fire protection reduced to skeletal levels?

The steep decline of America’s industrial cities like Flint over the past twenty years was driven by earlier wrong-headed federal government policy actions that badly wounded our country.

Key federal decisions between 1992 and 2000, in particular, sharply accelerated the de-industrialization of America — driving millions of middle class American jobs overseas to other countries. These mistaken policies have destroyed countless families, ruined lives and communities and helped drive Flint into such severe economic distress that it now faces a contaminated water supply imposed by a state mandated financial czar — in the name of “cost-saving.”

Flint’s Downhill Slide Was Triggered in the 1990s

Looking back to 1992, one sees that Flint and other manufacturing communities in the industrial Midwest were thriving economically before a series of destabilizing events occurred in national policy. These destructive national policies were put in place from 1992 to 2000 — by three major Clinton Administration economic policy initiatives at that time.

These major destructive national policy initiatives were, (1) The North American Free Trade Agreement, known as NAFTA, (2) The near complete deregulation of Wall Street, with the repeal of the Glass-Steagall law, and (3) Punitive welfare reform, which reduced vital income assistance to low-income families — creating its worst damage in minority communities — particularly among African-Americans.

Adding further to the economic stress imposed by these three hurtful policies was the devastating failure to enact a national health insurance program in 1994 at a time when job loss was eliminating employment based health insurance coverage.

NAFTA was falsely sold as program to reduce trade deficits and increase U.S. jobs, but this Clinton economic initiative badly hurt Flint and the rest of America’s manufacturing base. Since NAFTA’s enactment in 1993, over one million U.S. jobs have been out-sourced to foreign countries and some 60,000 U.S. manufacturing facilities have been shut down. GM, Ford and Chrysler have all built auto plants in Mexico and moved the U.S. jobs there.

In the U.S., the jobs replacing these well-paying manufacturing jobs were generally low-skilled service sector jobs that do not provide a living wage. NAFTA put severe downward pressure on U.S. wages, which served to further increase economic inequality within America.

Since NAFTA, it is not surprising that the top one percent has seen its share of national income increase by 40 percent. The super rich in America have benefitted greatly from the outsourcing of U.S. manufacturing jobs to foreign countries. It is fair to say that no community was hurt more by NAFTA than Flint.

The Depression-era Glass-Steagall law separated the activities of commercial and investment banks in response to the speculation which helped cause the Great Depression. For many decades it kept the U.S. financial system safe and strong. In 1999, President Clinton worked with the Republicans in the Congress to “modernize” financial regulation by repealing Glass-Steagall, and then also deregulated financial derivatives.

This reckless elimination of financial regulations triggered the greatest speculation binge in Wall Street history — that would ultimately push the nation’s financial system to the brink of complete collapse in 2007. It also permitted the Wall Street elite to earn and keep billions in income — before the system caved in from its own excesses. During this Great Recession the Wall Street crash created massive damage on Main Street. Flint’s unemployment rate rapidly doubled from 8 percent to 17 percent — with the Flint unemployment rate among young black males now among the highest in America.

The Clinton Administration also worked in 1996 with Congressional Republicans to “change welfare as we know it.” The changes enacted were very punishing. The existing Aid to Families with Dependent Children (AFDC) program was replaced by Temporary Assistance for Needy Families (TANF), which had stringent work requirements and time limits on assistance determined by the states. In Michigan the benefits now cover only 20-30 percent of the poverty line, representing a 30 percent decline in the benefits paid since TANF was enacted. Today, the Michigan program provides less than $5 per day per person in benefits.

At a time when jobs were rapidly disappearing in Michigan, TANF was a major blow to the increasing number of families needing public assistance, particularly single mothers and their children. Every dollar of reduced assistance also had a major negative economic impact on the entire Flint community. This Clinton initiative severely hurt low-income families — most especially black families facing other challenges.

Today, the poverty rate in Flint is over 40 percent, with 66 percent of its children living in poverty. African Americans make up 56 percent of the Flint population, with whites making up 37 percent. The only other city of similar size with more poverty than Flint is Youngstown, OH, another manufacturing center hard hit by NAFTA — and the punishing Clinton welfare reform program.

The Clinton Administration failed to enact a health insurance program for all Americans when it refused to work with a bi-partisan group of Senators who had prepared a compromise health plan that could pass Congress. This failure of what was referred to as “Hillarycare” came at a time when communities like Flint urgently needed health insurance to replace coverage lost as jobs disappeared and for those who were uninsured. It would be 16 long painful years before another opportunity would come for Democrats to enact the health insurance program known as “Obamacare.”

During these 16 years, the people of Flint experienced untreated illness and disease, and without question, many deaths occurred that could have been avoided if health insurance and proper treatment had been available. The absence of health insurance also placed more economic stress on a community that was overwhelmed with needs — but lacked the jobs and income and tax base — to meet these basic human needs.

All of this happened long before the poisoned water system crisis of the past two years.

The Poisoning of Flint’s Economic Future

Before Flint’s 100,000 citizens had their water poisoned, their economic future was being poisoned by these detrimental and badly mistaken national economic policy failures. Had this policy poison not been set loose on its economy in the 1990s, Flint’s budget crisis and the undemocratic state take-over of its management would likely never have occurred.

The poisoning of the city’s water would never have been permitted by its own locally elected officials. The state government applied a plantation mentality to the people of Flint — putting cost savings above any serious concern for the people and the public health. This would not have happened, however, if Flint’s economic footing had not been shattered by harmful national economic policies of the 1990s.

Until there is a safe water delivery system in Flint and its citizens receive the remedial health care they need, Flint will remain trapped in an economic Neverland. New national economic and trade policies are essential if Flint is to fully recover — once the water problem is fixed. We need to elect a President that is committed to reversing the ruinous national policies created 20 years ago in Washington, DC that set off the downward economic spiral for Flint — and supports the actions needed to again restore the economic vitality of Flint and other U. S. manufacturing communities.