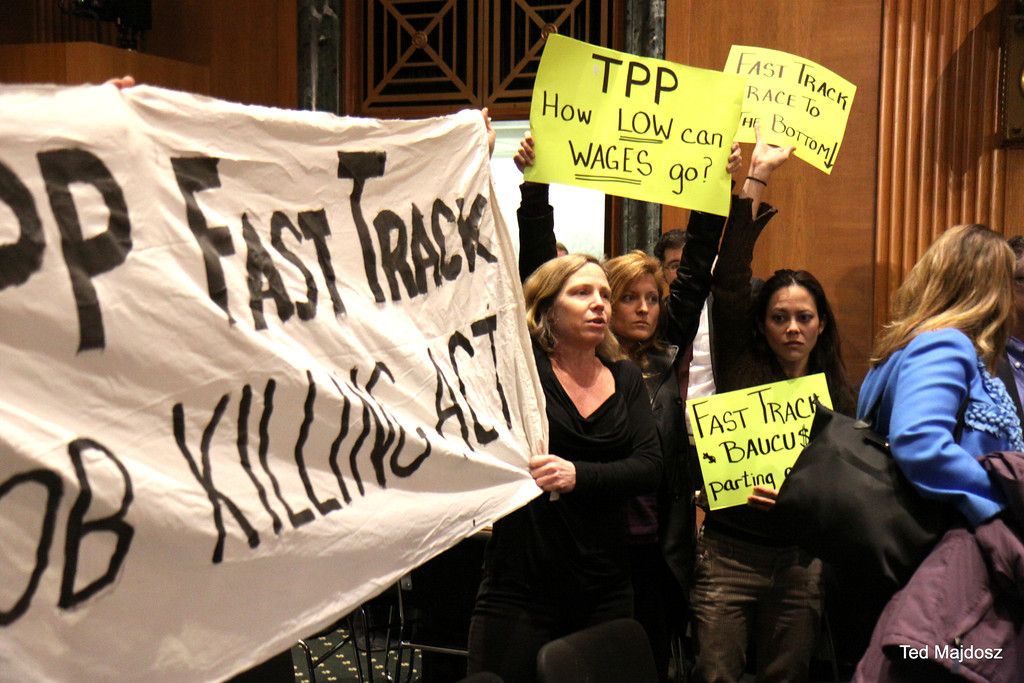 Above: Protesters at Fast Track bill hearing before the Senate Finance Committee on November 16, 2013, photo by Ted Majdosz

Sen. Max Baucus (D-Mont.), chair of the Senate Finance Committee and President Barack Obama’s pick to be his next ambassador to China, offered the legislation last week, surprising many of his colleagues.

Baucus’ bill, which would reauthorize 2002’s Trade Promotional Authority, would essentially give the White House the power to present Congress with trade agreements that lawmakers could not amend. The fast track bill would ease the way for the controversial Trans-Pacific Partnership, a 12-nation trade deal that opponents contend would undermine labor, environmental and other protections.

But if those opponents were worried the fast-track measure might advance, Reid was emphatic in saying it would not — at least for now.

Asked if he told Baucus that Reid would make time on the floor of the U.S. Senate to debate the measure, Reid said “No,” four times.

“There’s a lot of controversy on that, and I’m going to see how that plays out with my caucus and the Senate.,” Reid told reporters on Capitol Hill.

Indeed, many Democrats are so unhappy with the current draft of the Trans-Pacific Partnership, they are willing to kill it even though it is a key element of Obama’s ambitious pivot toward Asia.